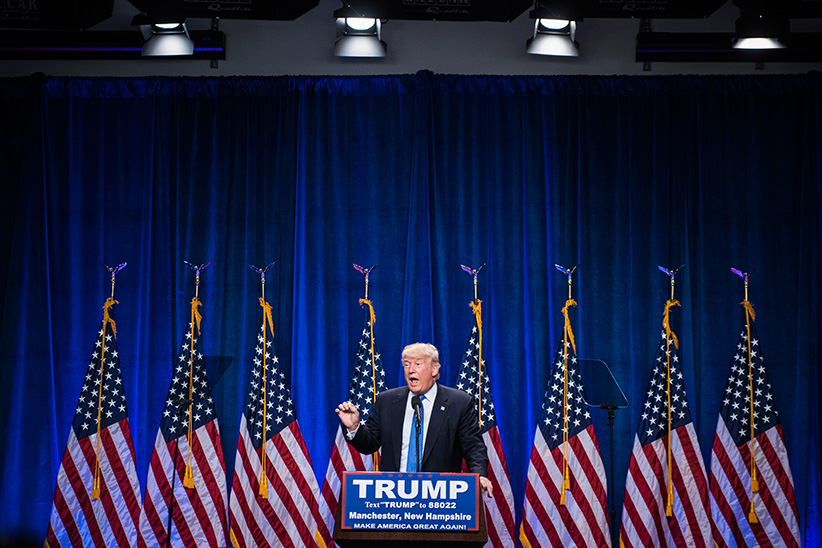 WASHINGTON — Donald Trump laid out an economic future Tuesday that improbably resembles the past, declaring “it will be American steel” that once again builds gleaming skyscrapers and fortifies the bridges and American factories that broadly revive a manufacturing economy long gone.

In Trump’s nostalgia-tinted vision, the complex and diverse U.S. economy can be fixed by tariffs, factory jobs and forcing foreign partners back to the bargaining table.

But to achieve it, he would have to reverse not only globalization, but automation, a changing workforce and other seismic shifts of a U.S. economy that has become more dependent on educated workers and the low prices made possible by international trade.

A look at his arguments and how they compare with the facts:

TRUMP: “Our Founding Fathers understood trade much better than our current politicians, believe me.”

THE FACTS: Global trade looks radically different now compared with the 18th century. Goods are transported by tankers and jets, instead of frigates and clippers. Money flows electronically over computer connections, instead of the barter-heavy system common in colonial America.

Tariffs were used in America’s early years to protect an emerging industrial economy, instead of the mature one that exists today, where automation is as much a threat to factory jobs as foreign trade. Tariffs raised the price of goods for the middle class while enabling robber barons and tycoons to live with few tax burdens, prompting U.S. voters in 1912 to back a more equitable tax structure while relying less on protecting the nation’s industries. Their fix: the income tax.

The federal government collects just $35 billion in tariffs — a sum that would need to increase roughly a hundredfold if Trump aims to finance the government in a manner similar to the Founding Fathers.

TRUMP: “When subsidized foreign steel is dumped into our markets, threatening our factories, the politicians have proven, folks, have proven they do nothing.”

THE FACTS: Not exactly nothing.

The Obama administration slapped Chinese steelmakers with a combined 522 per cent penalty this year.

Buttressed by government subsidies, Chinese mills churned out too much of the cold-rolled steel used for autos and other products. So the Chinese firms slashed steel prices and dumped their steel on U.S. shores. This prompted a complaint by five U.S. steelmakers in 2015, which the Commerce Department investigated as required before announcing the first of the new duties in March.

If Trump has any bone to pick, it might be that the required investigation took too long to protect U.S. mills fully from the Chinese dumping.

TRUMP: “This wave of globalization has wiped out our middle class.”

THE FACTS: He’s right that some of the blame for setbacks suffered by the blue-collar middle class belongs with outsourcing and offshoring to countries with cheaper wages. But the global economy does not deserve all of the blame.

Trump’s explanation ignores other fundamental changes in the U.S. economy.

Millions of routine jobs have disappeared due to automation, among them assembly line work and office jobs, such as executive secretaries replaced by email and voicemail. Research by economists Henry Siu and Nir Jaimovich found that jobs have been prone to elimination because of automation since recessions in the 1990s.

THE FACTS: Dependence cuts both ways.

Those same foreign factories depend on U.S. customers for their products. So the same argument could be made that China has grown more dependent on the United States.

This includes Wal-Mart shoppers who prefer lower prices, rather than products made domestically. The Associated Press confirmed this preference in a survey this year that found roughly two-thirds of Americans would rather buy $50 pants sewn in Asia than $85 pants sewn in the United States. If prices rise too high, Americans will spend less and economic growth will slow.

Nor are foreign and U.S. factories necessarily in direct competition. Roughly half of imported goods are used by U.S. companies to put together finished products, according to the American Action Forum, a centre-right advocacy organization.

TRUMP: “Today, we import nearly $800 billion more in goods than we export. This is not some natural disaster. It is a politician-made disaster.”

THE FACTS: That’s in the ballpark, but not the whole trade story.

The trade deficit on goods was $762.6 billion in 2015. But he neglects to include the valuable services that foreigners buy from U.S. firms. Those services reduced the total trade deficit to roughly $500 billion, according to the Census Bureau.

It’s hard to see the problem as the sole fault of politicians. Many businesses chose to relocate their factories abroad in order to increase their profits, while others kept their production in the United States. Trump himself outsourced the stitching of his neckties and branded clothing to China, among other countries.

TRUMP: ``We are one of the highest taxed nations in the world.”

THE FACTS: This repeated claim by Trump is wrong. The U.S. tax burden is actually one of the lowest among the 34 developed and large emerging-market economies that make up the Organization for Economic Cooperation and Development.

Taxes made up 26 per cent of the total U.S. economy in 2014, according to the OECD. That’s far below Sweden’s tax burden of 42.7 per cent, Britain’s 32.6 per cent or Germany’s 36.1 per cent. Only three OECD members had a lower figure: Chile, South Korea and Mexico.