By Michael Biesecker and Eric Tucker, The Associated Press October 28, 2016 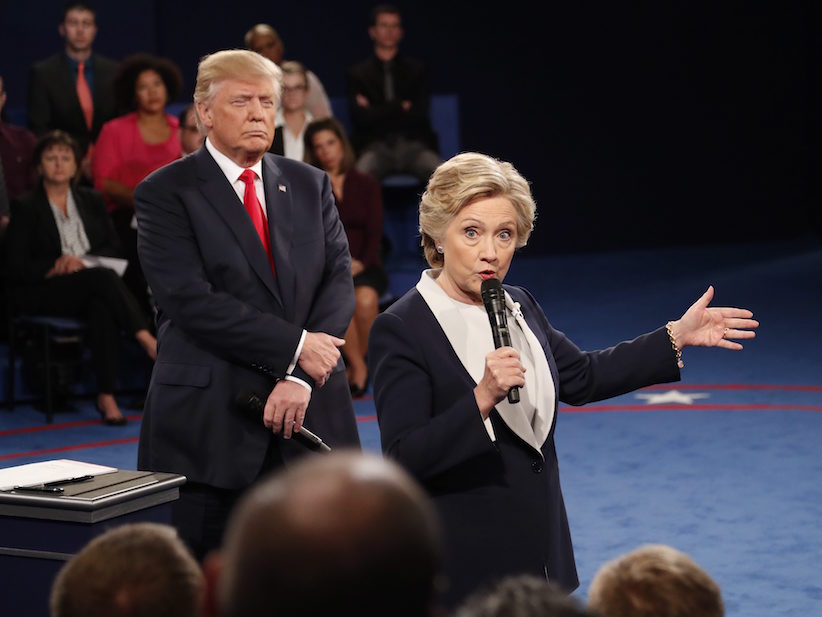 MANCHESTER, N.H. — The FBI will investigate whether there is classified information in newly discovered emails related to its probe of Hillary Clinton’s private server, reinjecting one of the most toxic political issues into the presidential campaign less than two weeks before Election Day.

Donald Trump immediately pounced on the turn of events, seeing an opportunity to press the argument he’s long tried to make against Clinton: That she thinks she’s above the law and that she put U.S. security at risk by using her personal email.

The GOP nominee told cheering supporters at his first campaign rally of the day that he has “great respect” for the fact that the FBI and the Department of Justice are now “willing to have the courage to right the horrible mistake that they made” in concluding the investigation earlier.

Trump said of Clinton, “We must not let her take her criminal scheme into the Oval Office. … This is bigger than Watergate.”

The Friday afternoon disclosure raises the possibility of the FBI reopening the criminal investigation involving the Democratic presidential nominee, which the agency said was complete in July.

In a letter sent Friday to congressional leaders, FBI Director James Comey said that new emails have emerged, prompting the agency to “take appropriate investigative steps” to review information that flowed through the private email sever Clinton used while serving as secretary of state.

Clinton’s email use has been one of the biggest vulnerabilities in her campaign for the White House. Even if she wins, Republicans have vowed the issue will follow her, promising continuing investigations.

She made no mention of the FBI development in the first part of a rally in Cedar Rapids, Iowa, on Friday, though she warned her supporters, “Anything can happen” in the campaign’s closing days.

She told the crowd that Trump is particularly trying to get women, young people and minorities to stay home — “part of his scorched earth campaign, the last refuge of a bankrupt candidate.”

Clinton’s campaign didn’t immediately respond to the news. She ignored shouted questions from reporters as she walked off her plane in Cedar Rapids, Iowa.

But her campaign was fending off other political problems as well, still trying dismiss the revelations in thousands of messages stolen from the private account of a top Clinton aide, part of a hack the Democratic campaign has blamed on the Russians.

“These are illegally stolen documents,” Clinton campaign manager Robby Mook told reporters on her campaign plane. “We’re not going to spend our campaign fighting back what the Russians want this to be about.”

So far, the email-related controversies haven’t seemed to hurt her campaign in the final weeks.

Recent surveys show Clinton retaining her lead in national polls and making gains in some swing states. Her campaign announced plans to hold a rally in Arizona next Wednesday, a traditionally red state put in play by Trump’s deep unpopularity among minority voters, Mormons and business leaders.

Feeling confident, she’s begun focusing on helping Democrats win control of the Senate, expand their margin in the House and lay the groundwork for future victories in demographically-shifting states like Arizona.

Her campaign will also get a boost from President Barack Obama, who will hold an evening rally in Orlando, a key battleground area of the crucial swing state of Florida.

Trump, meanwhile, is holding Friday events in New Hampshire, Iowa and Maine, one of two states that split their electoral voters by congressional district. Facing an increasingly narrow path to the 270 electoral votes needed to win the White House, his campaign is shooting for one of the traditionally Democratic state’s four electoral votes in the more rural, conservative 2nd District.

His campaign said the billionaire businessman is plunging an additional $10 million of his personal fortune into his presidential bid, after new federal filings that show Hillary Clinton with an $85 million cash advantage in the final stretch.

The latest fundraising records, which cover the first 19 days of the month, show Trump had given only about $33,000 this month — far less than the $2 million he typically gives and still $44 million short of the $100 million he’s repeatedly promised to contribute over the course of the campaign.

Clinton’s campaign and joint accounts with Democrats had $153 million in the bank as of last week. That’s more than double the $68 million the Republican’s campaign and partnership committees had on hand.

“We are being incredibly efficient with the dollars we have. We’re doing things smarter,” said Trump deputy campaign manager David Bossie in a conference call with reporters.

He added, “I obviously want to see more on the air and with our communications, digitally and on television. That’s where we’re focusing on our final push.”