Daily Trump Tracker: The sometime actor is let off the hook for Trump-related fisticuffs, the Donald settles a suit, and the administration admits its a work in progress 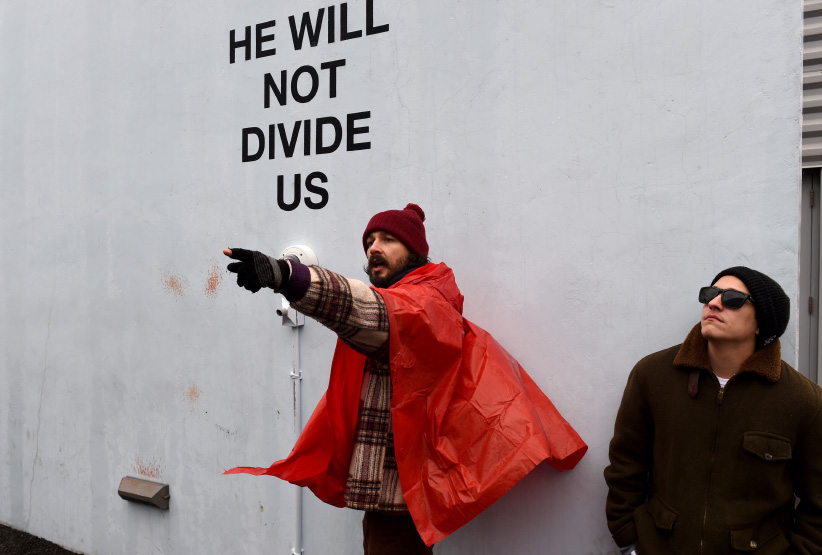 Shia LaBeouf during his He Will Not Divide Us livestream outside the Museum of the Moving Image in Astoria on Jan. 24, 2017. (Timothy A. Clary/AFP/Getty Images))

Wait for the White House to release Trump 2.0 before you buy
Adopting the tech vernacular, someone in the White House described the administration as being “in beta.” The lingo, which refers to the work-in-progress versions companies sling out in search of user feedback, was dropped by one of chief of staff Reince Priebus, his departing deputy Katie Walsh, and presidential innovation czar Jared Kushner. No word on when Trump’s team expects to launch the “live,” actually functioning update.

Stepping up to the plate without a plan
After the swings and misses of his Muslim ban and Obamacare replacement, successful tax reform was supposed to help the president start to build some momentum. But what’s this? The umpire is signalling a third strike. Having been caught on healthcare, Trump reportedly doesn’t want to tag-team with the legislative branch this time out, but lacks the staff and ideas to craft a game plan on his own.

The Art of the Settlement
The class-action suit that gave us the Donald’s attack on a sitting judge for the geography of his parentage is at an end. The president had offered to settle the case, brought by former students of his eponymous “university,” for $25 million. Resolution came when judge Gonzalo Curiel, the target of Trump’s ire, turned down a final objection to closing the deal.

Just (Don’t) Do It (Again)
The Queens district attorney is dropping charges against performance artist and professional beard-haver Shia LaBeouf. The star of three loose-allegory-for-immigration-plus-explosions Transformers movies was arrested for scrapping with a man at an anti-Trump protest in January. Turns out there wasn’t enough evidence to make the case; no word on whether LaBeouf has since ceased his method-acted role as a public spectacle.

Go grab ’em for me Mikey, there’s a dear
Trump huffed off into another room rather than stand around the Oval Office answering reporters’ questions. Vice-President Mike Pence had to walk over to the presidential desk, resist every bone in his body telling him to sit down, pick up the folder containing trade-related executive orders and carry them over to his boss to sign.