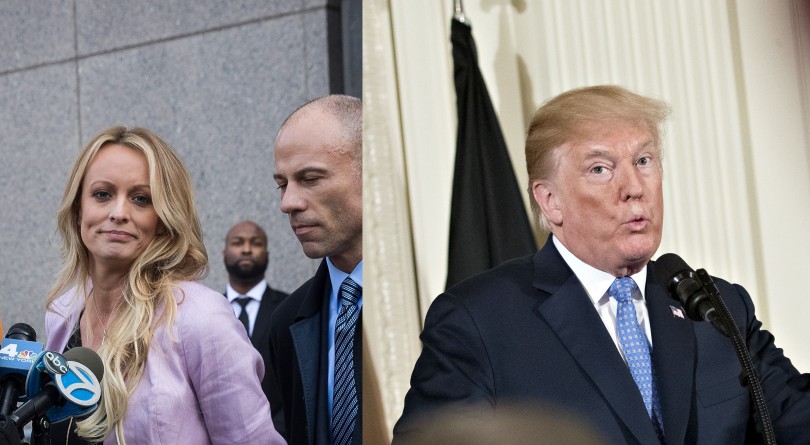 As new details emerge about the $130,000 in hush money paid to adult film actress Stormy Daniels from Donald Trump’s lawyer, a black cloud of scandal continues to hang over the president’s head, with no sign of dissipation in the forecast.

Daniels, whose real name is Stephanie Clifford, alleges that she had a sexual encounter with Trump in July 2006. She told 60 Minutes that 11 days before the election, she signed a non-disclosure agreement preventing her from telling her story that was orchestrated by longtime Trump attorney Michael Cohen. In return, Cohen paid Clifford $130,000 through a shell company based in Delaware called Essential Consultants LLC.

Here’s a look at the evolution of the conflicting explanations that Trump and his handlers have tried to provide.

Then in January, the Wall Street Journal published more details about the claims, including the $130,000 payment. In that story, an unnamed White House official was quoted calling the allegations “old, recycled reports, which were published and strongly denied prior to the election.” And days after the story was published, White House deputy press secretary Raj Shah called the questions about the alleged affair and settlement “asked and answered.” Neither Shah nor the unnamed White House official addressed the payments.

RELATED: How Stormy Daniels is closing the credibility gap for women

Wait, there was a payment?

On Feb. 13, Cohen told the New York Times that he paid the $130,000 from his own funds, publicly acknowledging the payment for the first time. Cohen did not say whether the president knew about the payment.

“Neither the Trump Organization nor the Trump campaign was a party to the transaction with Ms. Clifford, and neither reimbursed me for the payment, either directly or indirectly,” Cohen told the Times. “The payment to Ms. Clifford was lawful, and was not a campaign contribution or a campaign expenditure by anyone.”

During a White House press briefing on March 7, press secretary Sarah Huckabee Sanders revealed that the case between Clifford and Trump went through arbitration, and claimed that Trump was unaware of the payments. She told reporters, “This case had been won already in arbitration, and there was no knowledge of any payments from the president, and he has denied all these allegations.” Sanders did not elaborate, but it soon emerged that the agreement Clifford signed included a provision to resolve any disputes through arbitration.

RELATED: Donald Trump is losing his fight against Stormy Daniels

On April 5, during an impromptu scrum aboard Air Force One, Trump personally addressed the scandal for the first time. A reporter asked, “Did you know about the $130,000 payment to Stormy Daniels?” to which Trump simply replied, “No.”

During her 60 Minutes interview, Clifford alleged that an unknown man had threatened her in a parking lot in Las Vegas, telling her, “Leave Trump alone. Forget the story. That’s a beautiful little girl. It’d be a shame if something happened to her mom.” In April, Clifford released a police sketch of the unknown man, which Trump mocked on Twitter. Trump called it “a sketch years later about a nonexistent man. A total con job, playing the Fake News Media for Fools (but they know it)!” which prompted Clifford to sue the president for libel.

Trump also spoke on Fox and Friends on April 26 and confirmed that Cohen did represent him with “this crazy Stormy Daniels deal.”

While on Sean Hannity’s show on Fox News, the former New York City mayor, who had only been on Trump’s legal team for a few days, revealed on May 2 that Trump personally repaid Cohen for the $130,000. The same day, Giuliani told the New York Times that the president had been re-paying Cohen $35,000 a month and in total, Cohen received $460,000 or $470,000 from Trump. This contradicts Cohen’s claims that he paid the $130,000 out of pocket and the claims that Trump was unaware of the payments.

In an effort to explain the contradiction, Sanders told reporters in a press briefing on May 2 that Trump’s initial denial of knowing about the payments was based on “information that the president didn’t know at the time, but eventually learned.”

In an uncharacteristically carefully worded statement on Twitter, Trump admitted that Cohen was on a monthly retainer and acknowledged the non-disclosure agreement, which he called “very common among celebrities and people of wealth.” He once again denied the allegations of the affair and denied any involvement of campaign resources with respect to this agreement.

Mr. Cohen, an attorney, received a monthly retainer, not from the campaign and having nothing to do with the campaign, from which he entered into, through reimbursement, a private contract between two parties, known as a non-disclosure agreement, or NDA. These agreements are…..

…very common among celebrities and people of wealth. In this case it is in full force and effect and will be used in Arbitration for damages against Ms. Clifford (Daniels). The agreement was used to stop the false and extortionist accusations made by her about an affair,……

…despite already having signed a detailed letter admitting that there was no affair. Prior to its violation by Ms. Clifford and her attorney, this was a private agreement. Money from the campaign, or campaign contributions, played no roll in this transaction.