For Beto O'Rourke, a wobbly little election platform does the job

Image of the week: Hopping aboard tables suits his brand as the Dems' youthful, quirky, down-to-earth candidate. But does he have anything to say when he's up there? 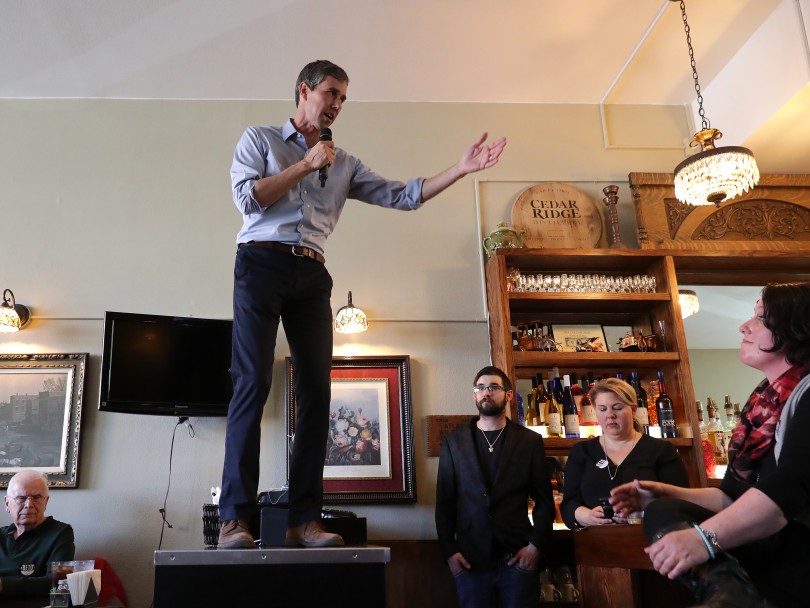 Among the world’s many social norms, one unwritten rule remains constant: if you stand on a table in a location where most people do not stand on tables, everyone in the room is going to stare at you. Democratic presidential candidate Beto O’Rourke knows this principle well, and has spent the first week of his campaign standing on as many as he can. If there is no table, he will stand on other things, like chairs or counters, leveraging his lanky six-foot-four frame into a dynamic tower of rolled-up shirtsleeves and charismatic hand gestures. The phenomenon has become the stuff of think-pieces and Twitter accounts—one can imagine the inevitable SNL skit spoofing Beto preaching from atop a wardrobe. In many ways, the image of O’Rourke, the spry, 47-year-old rising Democratic star, jumping onto a counter to sermonize about immigrants’ rights and climate change, is a perfect summation of his deliberate brand: youthful, quirky, down-to-earth. And it’s been a successful branding effort; he raised $6.1 million in 24 hours, the most of any current Democratic candidate. But beyond the marketing, his campaign looks dangerously thin. That $6.1 million came from about 128,000 people—a little more than half the number who gave to Bernie Sanders, who raised $5.9 million in his first day. Outside his circle of committed donors, O’Rourke has drawn skepticism. Progressives decry his privilege as an attractive white male, conservatives roll their eyes at his hokey Vanity Fair cover story and pundits question the facts behind his vague policy promises. A least he’s still got those tables to stand on, which means he’s got our attention—for now.