A star witness at the impeachment hearings cited a 'clear quid pro quo.' But by afternoon he was backtracking. 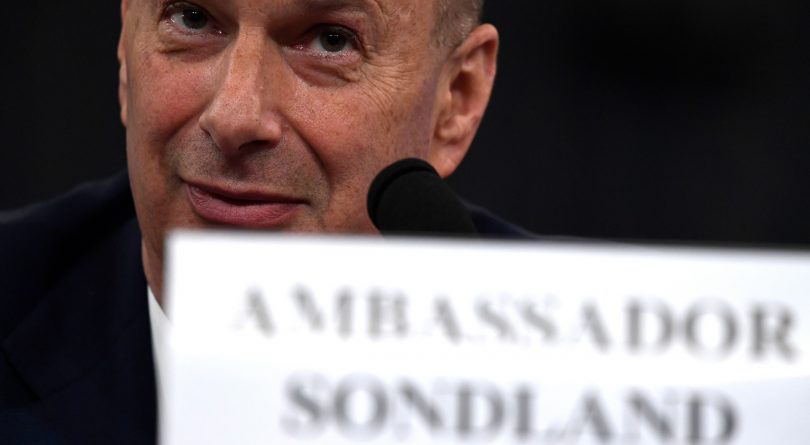 “I am so excited that a Yogurtland finally opened in my neighborhood!” enthused a California woman who calls herself “Zee L.” on Yelp.com.

“I was in the market for lash extensions,” began another of her reviews. “Herman did a beautiful job … I can’t stop staring at myself.”

And then this, about a hotel in Portland, Ore.:

Looking for a hotel owned by a traitor? Looking to stay at a hotel owned by a moron who gives Trump a million dollars then perjures himself in front of Congress on Trump’s behalf? Then look no further! BONUS: plush bath robes and white hoods available in each room.

It was Wednesday morning and the so-called “traitor” and “moron” was striding, tall and bald, into the plushest formal hearing room with the biggest chandelier in the United States Capitol. Gordon Sondland, Donald Trump’s ambassador to the European Union, the son of a German Jew who escaped extermination by being roped to the bow of a ship, had risen high enough in the Pacific Northwest of the United States as a banker and hotelier, and had donated generously enough in 2016 as a late-boarding Trump-train rider that he had been rewarded with a delicacy of a diplomatic destination—all of Western Europe, and a slice of the Eastern torte, too.

RELATED: Wake up, America! The Impeachment Show is on

“I don’t know him very well,” Donald Trump professed Wednesday, as believably as ever, even after Sondland avowed under oath that he could get the insecure president on an unsecured cellphone, almost any time he wanted to. “I have not spoken to him much. This is not a man I know well. He seems like a nice guy though.”

By that point, nice-guy Gordon already had testified to the Lord High Impeachers that yes, yes, yes, of course there was a tit-for-tat with the Ukrainian government—Volodymyr Zelensky can have an Oval Office photo op but he has to say the words “Burisma” and “2016” on CNN—and yes, yes, yes, Sondland eventually came to presume that the deal included four hundred withheld million dollars in American military gift cards, and yes, yes, yes, “everyone was in the loop” and that included Mike Pompeo, the secretary of state, and Mike Pence, the vice-president.

To refresh the president’s memory, Gordon Sondland is, the Oregonian newspaper once reported, “a driven man with a fierce intellect and a healthy ego. He inspires strong feelings—few who know him are neutral.”

Certainly Zee L. is not neutral on the novice plenipotentiary—she detests Sondland, his loungewear, and especially his president, placing herself in the Trump’s-a-monster moiety of a nation whose division grows more irreparable every day. It is a crevasse so deep that no Buttigieg or Biden or Trump or Haley can possibly raise enough money to buy enough thread at Fabricland to stitch it shut in our lifetimes.

The clan that inhabits one side of the canyon sees traitors and morons wherever it aims its binoculars across the chasm. At the same moment that Gordon Sondland was unloading his presumptions in Congress, a member of Congress from Oregon was urging a boycott of Sondland’s hotels and there were people demonstrating outside that property.

Wednesday, with the president’s very own appointee in the witness chair saying exactly the three fatal Latin words they have been yearning to hear, the tribesmen on the left side of the gulch believed they finally had speared the beast that they needed to bring Trump down.

“The veneer has been stripped away,” gloated Adam Schiff, Chairman of Intelligence.

But it was only lunchtime.

On the opposite rim there dwells another other nation, just as fierce and merciless, the clan that abjures the liberal legislators and their media functionaries who “stoke a frenzy among their most fanatical supporters that they can no longer control,” the people “who know exactly the kind of damage they’re inflicting on this nation past the point of no return,” as Republican point man Devin Nunes put it in the impeachment chamber on Wednesday.

Gordon Sondland was the fifth of the nine men and women who were commanded to testify in public in the second week of the third presidential impeachment in U.S. history. He named names and dated dates. He made everybody laugh—even Democrats—when he verified that he had told Donald Trump that Volodymyr Zelensky “loves your ass.” He said that he had put two and two together in his own mind and it equaled a this-for-that.

RELATED: It’s almost like Donald Trump wants to be impeached

He took the throttle of the Trump Express and crushed Rudy Giuliani into a hideous mere of blood, bone, and eyeglasses. But like Judge Doom in Who Framed Roger Rabbit, America’s Mayor popped up from the track bed, drew a deep breath, and charged that “Sondland is speculating based on VERY little contact. I never met him.”

The big locomotive steamed on.

Gordon Sondland said he had asked the president, point blank, “What do you want from Ukraine? What do you want?” (There might have been a four-letter word inserted between the “what” and the “do,” the ambassador said. The two innkeepers had an earthy relationship.)

Moments later, a staffer put a poster on an easel behind the Republican delegation and the sign said I WANT NOTHING.

“Democrats keep chasing ghosts,” said the president’s press secretary, a woman whose own corporeal substance never has taken questions from the press in the White House Briefing Room.

“They get the call, they get the meeting, they get the money!” snarled Jim Jordan, Republican of Ohio, as the president’s tail-gunners strafed his own donor and appointee, a man who still works for Donald Trump, just as the Army officer and the senior adviser who testified on Tuesday still have to go back to the Situation Room.

“They got the money, yes! They got caught,” cried Adam Schiff.

“Nobody else on this planet told you that Donald Trump was tying this aid to the investigation,” wagged another Republican. “You really have no evidence.”

“Other than my own presumption,” Sondland slumped.

“That was the problem,” Sondland backtracked. “No one told me directly that the aid was tied to anything. I was presuming it was.”

It was the biggest “I presume” since Stanley found Livingstone.

“That means it’s all over,” Donald Trump said on the White House lawn.

Now it was Sondland, the son, being dragged through the water. It was the Republicans now who were trashing him on social media.

“I don’t recall President Trump ever telling me about security assistance ever,” the ambassador hemmed.

“No, we’re not friends,” Gordon Sondland said of the man in the Oval Office.

The president, Gordon Sondland testified, was in a bad mood the last time they spoke.