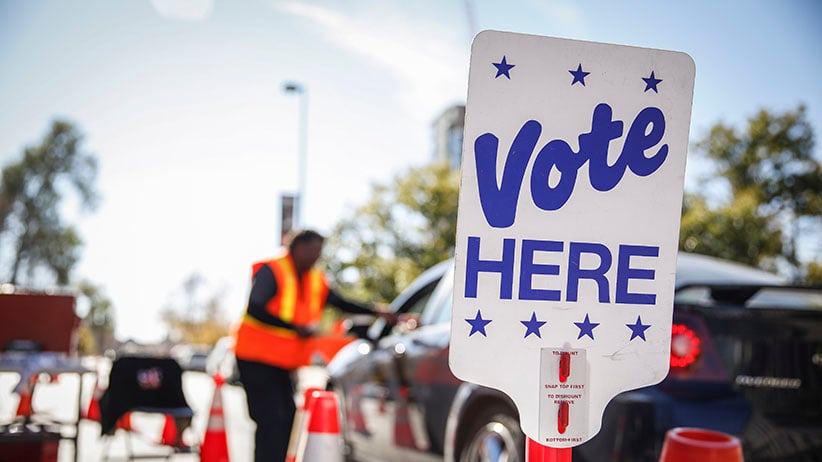 JEFFERSON CITY, Mo. — Republicans won control of the Vermont governors’ office Tuesday, picking up a previously Democratic seat in their quest to expand their statehouse leadership to their strongest levels in decades.

The governors’ contests in a dozen states were part of a battle for statehouse supremacy that also included nearly 6,000 state legislative elections. Heading into Tuesday, Republicans controlled more than two-thirds of the nation’s legislative chambers, as well as 31 of the 50 governors’ offices.

They were inching toward their historical high of 34 governorships sent in 1922.

In a key legislative battle, Republicans also won control of the Kentucky House — the lone remaining Democratic-held chamber in the South — for the first time in nearly a century while defeating Democratic House Speaker Greg Stumbo.

The states in play Tuesday include:

Republican Lt. Gov. Phil Scott defeated Democrat Sue Minter to take over the office held by Democratic Gov. Peter Shumlin, who chose not to run for another two-year term.

Scott is currently the only Republican statewide officeholder in a liberal-leaning state but has tacked to the left by embracing abortion rights and gay marriage. Minter was a former transportation secretary for Shumlin.

Greitens capitalized on his military service and his work as founder of the veterans’ charity known as The Mission Continues. He cast himself as an outsider going up against a career politician. Koster, a former Republican state senator, had picked up key endorsements from the National Rifle Association and major agricultural groups.

In one of the nation’s highest-profile races, Republican Gov. Pat McCrory was locked in a close race against Democratic Attorney General Roy Cooper.

The race has become a referendum on North Carolina’s rightward shift under McCrory, highlighted by a law that limits anti-discrimination protections for lesbian, gay, bisexual and transgender people and directs transgender people to use public restrooms matching the gender on their birth certificates. Cooper has vowed to try to repeal the law as governor.

Recent flooding from Hurricane Matthew has also played into the race, as McCrory has been at the public forefront of response and recovery efforts.

Lt. Gov. Eric Holcomb won election over Democrat John Gregg to continue a 12-year run of Republican governors in Indiana. Holcomb, a former state Republican Party chairman, had had been appointed to the state’s No. 2 spot by Gov. Mike Pence and later was nominated as his replacement when Pence dropped his re-election bid in July to run for vice-president.

Gregg had tried to cast Holcomb as a “rubber stamp” for Pence, pointing out Holcomb’s support for a religious-objections law that Pence signed. Opponents said the law, which was later revised, sanctioned discrimination against same-sex couples by allowing businesses to refuse to serve them.

Jim Justice’s victory will continue a 16-year stint of Democratic governors in a state that has otherwise been tilting toward Republicans. Justice, the state’s wealthiest resident, cast himself as a political outsider adept at creating jobs.

Republican candidate Bill Cole, the state Senate president, had hoped to ride Trump’s coattails. But Cole’s pledge to revive the coal industry was offset by Justice, himself a coal billionaire.

Democrats have controlled the governor’s office for 18 of the past 20 years.

Democratic Gov. Steve Bullock was facing a challenge from Republican Greg Gianforte, a computer software firm founder who poured millions millions of his own money into the race. Gianforte aired more TV ads than all other statewide executive candidates in the nation, according to an analysis by the Center for Public Integrity of data from the tracking firm Kantar Media/CMAG.

Bullock was heavily aided by the Democratic Governors Association.