'Halfway Trump' is now America's sorry condition. Will it get worse?

Allen Abel: Two years after his election, Trump is proving his personal creed that power is everything—and damn the cost to his country 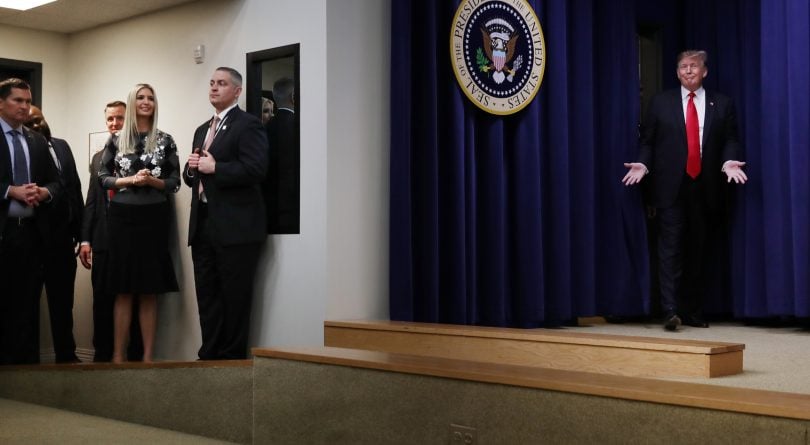 Two Christmases ago—though it seems much longer—we were at Zero Trump. At the airport in Baton Rouge, La., the private jetliner of a neophyte public servant was awaited by a manic horde. So many were the possibilities. So pregnant was that hour. So loud were the redeemed 5,000 from the bottom of the national map.

“Everything Obama stood for, Donald Trump is going to undo in his first hundred days,” an Air Force veteran was jubilantly promising a reporter as we awaited (still) Citizen Trump. How right was that vet, one hundred days ago times seven? How much of Obama’s America remains?

The former pastor of the New Orleans Saints blessed the crowd. Soon would dawn the day, he predicted, “when the White House is once again God’s house … when men know who men are, and women know who women are, and the mighty, powerful name above all names is Jesus Christ, the son of God.”

Two years have passed since that day in Baton Rouge. Christmas 2018 finds us Halfway Trump, rounding the turn and heading for home with the finish line in sight in January 2021, give or take a year or three or five. Twenty-four months of astonishment fade behind us; only the saints know how many more we must sustain before, in the words of Abraham Lincoln’s Secretary of War, he belongs to the ages.

As far as we know, Lincoln’s Secretary of War never called his president a moron.

A winter’s day at the National Portrait Gallery of the Smithsonian Institution. On the second floor are formal canvases of every American president except one. Powdered wigs, rampant mutton chops, life-sized Ike, a smiling Nixon—pre-Watergate—by Norman Rockwell. JFK in agitated, jagged green, George W. Bush in denim shirtsleeves, Barack Hussein Obama in a wooden chair, rampant on a field of spinach; organic, probably.

“I don’t see no room here for him,” a woman in a guard’s uniform tells a visitor, unjokingly. “But he is the president, so they‘ll have to put him somewhere.”

She nods to the spectacular Obama.

“They sure ain’t movin’ HIM,” says the guard.

“For Trump, my nomination would be the basement,” the woman says. She cracks a smile.

“In the basement with no lights on,” she says.

The woke T-shirts on the top rack say I Miss Abe.

“The Constitution only minimally defines the powers of the president because the founders sought to create an office that could change and develop as the course of American history unfolded,” reads an interpretive panel at the National Portrait Gallery.

RELATED: Donald Trump gets a visit from Jacob Marley and the Christmas ghosts

The National Postal Museum, a few blocks away. Every deceased president up to and including Ronald Reagan has been honoured on a U.S. adhesive. The life of George Bush the First will be commemorated within the next few weeks, may he rest in peace. No Trump stamp yet, unless you count the Central African Republic, which issued a sheet in 2016 featuring The Donald, Jimmy Fallon, Eddie Murphy, Larry King and Lady Gaga as “Célèbres NEW YORKAIS.”

“How does he get up every morning and face another day of hatred and ridicule?” a woman named C— at the philatelic window is asked.

As wrong as Bush the Second, as unfaithful as Clinton, as impotent as Hoover, as devious as Nixon, somehow Donald Trump is buffeted, parodied, detested, yet endures. He may have gone unhung at the portrait gallery, but much of Washington, D.C. (and Hollywood, and his New York) would be joyful to see him hang. Over Christmas at Mar-A-Lago, he will still be president, and you won’t.

“How does any human being survive this?” a daily witness to this incomprehensible, exhausting, indestructible two years wonders.

“He has his family around him,” says the postal clerk.

“Someday he will be called to judgment,” a visitor muses.

“Maybe by then he will have redeemed himself,” says C——.

Paul Ryan, Republican of Wisconsin, is speaking at the Library of Congress, his sand running through the hourglass with only a few grains left to fall. In every country blessed with a legitimate parliament, a national election signals the fall of one regime and the rising of another. Except here. Here, a lame-duck covey of men who gained the public trust two Christmases ago, or six Christmases in the case of august senators, continue as an obstructionist, bitter rump until they are dragged out of Congress, feet first.

Among the hobbled waterfowl is Paul Ryan, the black-haired tax-nocrat, who announced his resignation a summer ago, yet who still sits in the Speaker’s chair until January third at Washington noon.

“We have come a long way together on this improbable journey,” Ryan is saying. “From the bottom of my heart, thank you.

“All I keep thinking is: what a country.

“What a country, where someone of an unassuming Midwest upbringing gets the chance to be a part of all of this. Where you can pursue whatever your passion is, wherever it takes you. That’s the American Idea, isn’t it? The condition of your birth isn’t your destiny. Your struggle isn’t your destiny. It is part of our journey.”

Twenty-four hours later, Paul Ryan walks out of the Oval Office at God’s house and we are all standing in the rain and Paul Ryan says, “the president will not sign this bill.”

“I don’t see power as something you take for yourself, as if it is a prize to claim or a trophy to raise,” Paul Ryan says at the Library of Congress.

WRONG! snaps the 45th president. Power is everything, he understands, power is what makes a man; this is a condition of his birth.

Rewind the tape. Two Christmases ago—though it seems much longer—Zero Trump. At the airport in Baton Rouge, La., the celebrated New Yorkais had come to endorse the senatorial candidacy of a man named John Neely Kennedy, the Pelican State treasurer. And thanks to Donald Trump, John Kennedy won the election.

RELATED: Was the road to a Donald Trump impeachment paved by Andrew Johnson?

Seven hundred days later, Senator Kennedy stands in a quiet hallway of the Capitol, alone with a reporter, as pensive and pungent as always.

“How does this man get up every morning and face another day of hatred and ridicule?” the senator is asked.

“The president doesn’t believe in turning the other cheek,” he responds. “I think he believes that if you turn the other cheek too far, you get it in the neck, and he may well be right about that.”

“If we went back to that hangar this weekend,” we reminisce, “would the enthusiasm that those people had remain?”

“One of the most effective messages he had was when he told his base, ‘I know I’m unconventional and unknown but what have you got to lose?’ ”

Lost to normality, lost to civility, lost to truth and integrity and rage; lost to condescension from on high of the (white) people of the Pelican State and many states beyond, the American republic hangs the holly, half of them disgusted, half of them jubilant, Halfway Trump. Who will paint his portrait of the ages, greatcoat flapping, tie too long, sneering lips?