After failing to repeal the Obama-era Affordable Care Act, swift action on Harvey will give Congress and Trump the chance to look competent

WASHINGTON — Harvey has scrambled the equation for Congress as lawmakers get ready to return to Washington on Tuesday after a five-week summer recess.

A daunting workload awaits, including funding the government by month’s end and increasing the federal borrowing limit to head off a catastrophic first-ever default.

But the immediate focus will be on rushing an aid package to storm-ravaged Texas and Louisiana, and that bipartisan imperative has pushed aside talk of a government shutdown and President Donald Trump’s feuding with GOP lawmakers.

“Somebody who’s just been pulled off their roof doesn’t want to hear about our internecine squabbles and debates over procedure when they’ve lost their homes and are trying to figure out where they’re going to sleep the next night,” said Rep. Charlie Dent, R-Pa.

The House and Senate are expected to vote quickly on the first $7.9 billion aid installment to help with immediate recovery and rebuilding needs in Houston and beyond. Additional billions will be tucked into a catchall spending bill later in the month that will keep the lights on in government past Sept. 30, when the current budget year ends.

After spending the first six months of the year failing to repeal and replace the Obama-era health law and missing deadlines on other fronts, swift action on Harvey will give Congress and Trump the chance to look competent and remind voters that government can be a positive force.

GOP lawmakers head into the final quarter of the year desperate to notch accomplishments and make headway on a sweeping tax overhaul, and the majority party is eager for the chance to turn around their dreary track record ahead of next year’s elections.

For Republican leaders, disaster spending has the added benefit of acting as a potential sweetener as they try to get colleagues to take the perennially unpopular step of raising the United States’ $19.9 trillion debt ceiling. That has to happen by Sept. 29 at the latest, to permit the government to continue borrowing money to pay its bills, including Social Security payments. A default on obligations such as U.S. bond payments could roil financial markets.

GOP leaders have been making plans to pair the debt limit increase with the first batch of Harvey aid. Conservatives who oppose raising the borrowing limit without getting something in exchange are warning against the step. 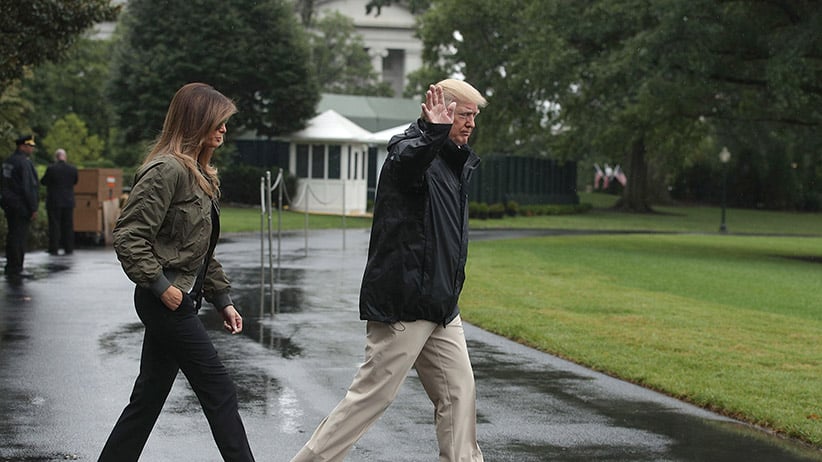 “To attach a debt ceiling vote to increased spending is not anything that any conservative would normally support,” said Rep. Mark Meadows, R-N.C., head of the House Freedom Caucus. Meadows said linking the two measures “puts everybody in a very difficult situation” and would not be practical.

Adding to the pile of work, a few important programs are expiring at the end of September and need to be renewed. They include children’s health insurance payments and a national federal flood insurance program that has bipartisan support but continually pays out more than it takes in through premiums.

And Trump may be poised to throw another tricky issue Congress’ way.

The White House says the president on Tuesday will decide the fate of the younger immigrants brought to the United States as kids and protected from deportation by former President Barack Obama’s Deferred Action for Childhood Arrivals. If Trump ends or phases out the program, there will be pressure for Congress to step in with a fix to save nearly 800,000 from the threat of deportation.

“I think the president as well has mentioned that he wants to have a humane solution to this problem and I think that’s something that we in Congress are working on and need to deliver,” House Speaker Paul Ryan, R-Wis., said in an interview Friday with radio station WCLO in Wisconsin, after urging against ending the program.

Some Republicans have even begun to talk about the possibility of a deal to protect this group in exchange for Trump’s border wall with Mexico, even though Democrats have called the wall a nonstarter.

Trump, despite threatening a government shutdown over the wall if it’s not funded by Sept. 30, has pulled back. The expectation now is that the big spending fights will be delayed until later in the year, perhaps including a round of brinkmanship over the wall.

But for many Republicans, particularly Ryan and Senate Majority Leader Mitch McConnell, R-Ky., clearing the decks of the must-do items on spending and debt is all just a prelude to their work on overhauling the tax system, their holy grail for the year after the failure on health care legislation.

Despite Trump’s attacks on McConnell over the summer, aides to the two men believe they share the same goals on taxes. Many believe that if they succeed on reworking taxes and lowering rates voters will forgive and forget the failure on health care. Some are argue that a failure on taxes could cost the GOP its House majority because voters will question whether Republicans can accomplish anything after gaining control of Congress and the White House.

“It’s extremely important. The failure of health care magnifies the importance of tax reform,” Cole said. “You’ve got to get some big wins.”