8 highlights of Barack Obama's last State of the Union address

From climate change to fighting ISIS, here is what the President had to say Tuesday night in Washington 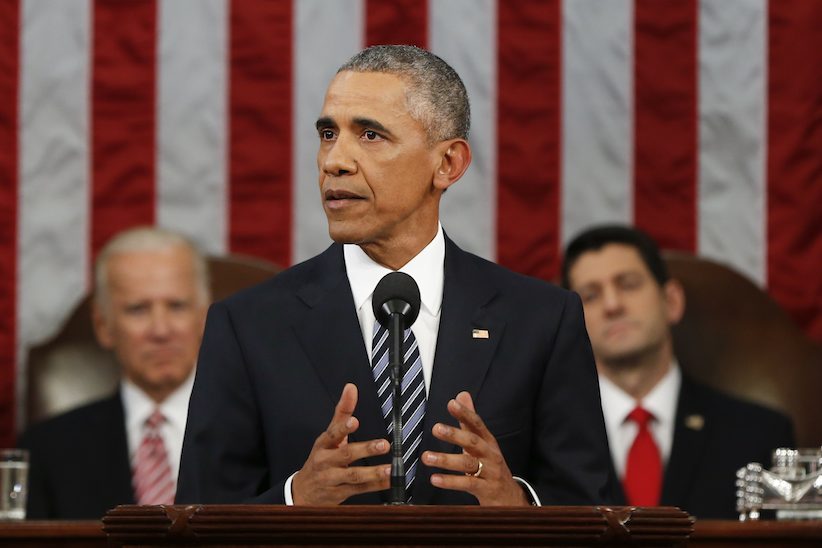 President Barack Obama’s final State of the Union speech offered little in the way of new policy initiatives, but plenty of upbeat talk about prospects for a strong future. His hour-long address predicated future gains on bridging the partisan divides so evident between the White House and Republican-controlled Congress, and in the sharp rhetoric flowing from the 2016 presidential campaign.

Tap here to read the speech.

Some highlights of his address:

Pushed back against GOP critics who sketch a gloomy picture of an America in economic decline and weakened on the world stage.

“All the talk of America’s economic decline is political hot air. Well, so is all the rhetoric you hear about our enemies getting stronger and America getting weaker. The United States of America is the most powerful nation on Earth. Period. It’s not even close.”

Said a future of peace, prosperity and opportunity is only attainable “if we fix our politics.”

“Our answer needs to be more than tough talk or calls to carpet bomb civilians. That may work as a TV sound bite, but it doesn’t pass muster on the world stage.”

Owned up to one regret in an otherwise optimistic address: That average people feel the system is rigged “in favour of the rich or the powerful or some narrow interest.”

Pledged to keep working on that “so long as I hold this office.”

Likened administration’s push against cancer to a new “moon shot.” Assigned Vice-President Joe Biden to lead a new push to fight cancer, building on a large increase in federal financing for the National Institutes of Health.

“Let’s make America the country that cures cancer once and for all.”

Identified a number of areas where Democrats and Republicans might be able to find common ground: pursuing criminal justice reform, promoting trade, fighting opioid abuse. Made an overture to new House Speaker Paul Ryan by highlighting his interest in fighting poverty.

“I’d welcome a serious discussion about strategies we can all support, like expanding tax cuts for low-income workers without kids.”

Promised resolve in fighting terrorism and the Islamic State group, but dismissed “over-the-top claims that this is World War III.” Rejected the idea that IS threatens “our national existence.”

“We just need to call them what they are — killers and fanatics who have to be rooted out, hunted down and destroyed.”

Predicted those who dispute the science of climate change will end up “pretty lonely.”

Promoted his efforts to fight global warming and said those who doubt it is happening are welcome to “have at it.”

“You’ll be debating our military, most of America’s business leaders, the majority of the American people, almost the entire scientific community, and 200 nations around the world who agree it’s a problem and intend to solve it.”

FILED UNDER: Barack Obama State of the Union 2016