Clinton, Sanders spar on Middle East, guns, economy but he says enough on the emails 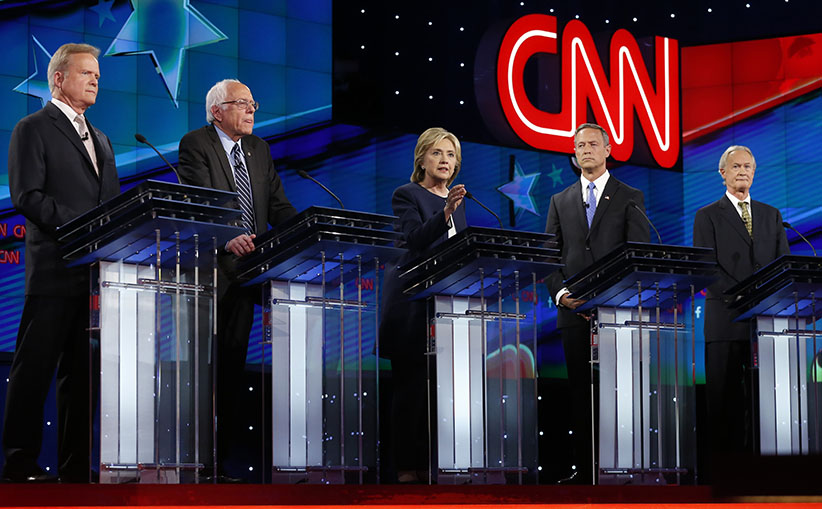 Yet in a moment of political unity — and levity — Sanders leapt to Clinton’s defence on the issue of her controversial email practices as secretary of state.

“The American people are sick and tired are hearing about your damn emails,” Sanders exclaimed as the crowd in Las Vegas roared with applause. A smiling Clinton reached over to shake his hand and said, “Thank you, Bernie.”

While the five candidates onstage took issue with each other, they also repeatedly sounded traditional Democratic themes — such as fighting income inequality — that are sure to carry over to the general election campaign against the Republicans.

First, the Democrats must choose their own candidate. And throughout most of the two-hour debate Clinton played the role of aggressor, an unexpected shift for a candidate who had barely mentioned her Democratic rivals since launching her campaign six months ago. Until now, Clinton and Sanders —who has emerged as her toughest competition —  have circled each other cautiously and avoided personal attacks.

After Sanders, a self-described democratic socialist, derided “a casino capitalist process by which so few have so much,” Clinton said it would be a “big mistake” for the U.S. to turn its back on the system that built the American middle class. Asked whether she thought Sanders, who has a mixed record on gun control legislation, had been tough enough on the issue, she said simply,“ No, I do not.”

The two also tangled over foreign policy, an issue where Clinton is often more hawkish than others in the Democratic Party. The former secretary of state reiterated her call for more robust U.S. action to stop the Syrian civil war and defended her judgment on international issues, despite having voted for the 2002 invasion of Iraq.

Sanders called the Iraq war “the worst foreign policy blunder in the history of our country” and said he would not support sending American combat troops back to the Middle East to fight terrorism. 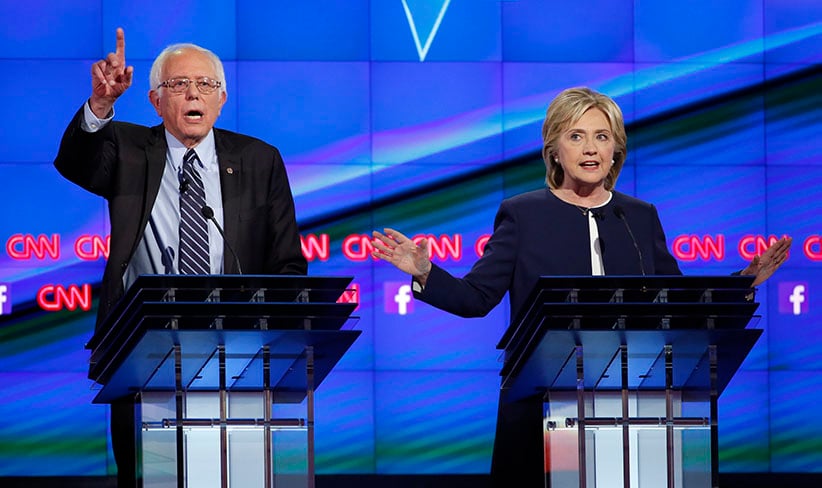 “Nobody does, Senator Sanders,” Clinton interjected.

Also hanging over the debate: the lengthy deliberations of Vice-President Joe Biden, who is weighing a late entry into the Democratic race. Debate host CNN kept an extra podium on standby just in case Biden decided to show up, but the vice-president instead stayed in Washington, where he was watching the debate at his residence.

For Democrats, Tuesday’s debate was an opportunity to steal attention from the drama in the Republican primary, where more than a dozen candidates are fighting to overtake billionaire Donald Trump. The real estate mogul still made his presence known Tuesday night, sending a torrent of Twitter commentary on the Democrats’ performances.

“Sorry, there is no STAR on the stage tonight!” he wrote.

While the Republican primary has been roiled by the emotional debate over immigration, the Democratic candidates were largely united in their call for providing a path to legal status for the millions of people currently in the U.S. illegally. The party is counting on general election support from Hispanics, a group that overwhelmingly voted for President Barack Obama in 2012.

Joining Clinton and Sanders on stage in Las Vegas was a trio of low-polling candidates looking for a breakthrough moment: former Maryland Gov. Martin O’Malley; Jim Webb, a former Navy secretary and U.S. senator from Virginia, and Lincoln Chafee, the Republican-turned independent-turned Democrat from Rhode Island.

For Clinton, the debate was a much-needed opportunity to focus on policy in addition to the controversy over her exclusive use of personal email and a private Internet server during her tenure in the Obama administration. The email issue has shadowed her rollout of numerous policy positions and has hurt her standing with voters.

Clinton said her email use “wasn’t the best choice” and cast the issue as a politically motivated effort by Republicans to drive down her poll numbers. She highlighted comments from Rep. Kevin McCarthy, R-Calif., who bragged about how a House committee investigating Clinton’s role in the 2012 attacks in Benghazi, Libya, had hurt her politically.

“I am still standing,” she said.

The only candidate on stage who challenged Clinton on her email practices was Chafee, who said “credibility is an issue.”

The former secretary of state has also faced criticism that she’s shifted her positions on trade, gay marriage and other issues to match the mood of voters — a charge she vigorously denied Tuesday.

“Like most human beings, I do absorb new information, I do look at what’s happening in the world,” Clinton said. Pressed specifically on her newly announced opposition to a Pacific Rim trade deal she touted while serving in the Obama administration, Clinton said she had hoped to support it but ultimately decided it did not meet her standards.

For Democrats to stay in the White House, they’ll need voters to feel comfortable enough with Obama’s tenure to keep his party in charge. While Clinton has broken with Obama on trade and vowed to do more than the president on immigration and gun control, she demurred Tuesday when asked how her administration would differ from the president.

“Being the first woman president would be quite a change,” she said.