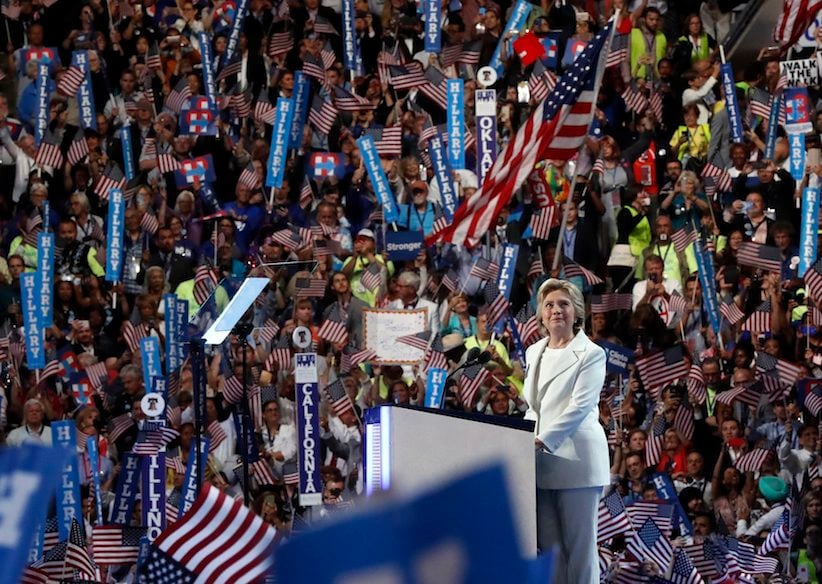 It’s not a secret that Hillary Clinton is not a natural at the performative aspects of politics. Most of what professional politicians say is scripted; even when it’s not written out in front of them, they tend to go back to the same lines and the same talking points. This leads to a strange situation where politicians are judged on their ability to make it seem like their words are not scripted, even though everybody knows they are. Marco Rubio’s political career was dynamited when he wasn’t able to disguise the script well enough. Ronald Reagan was able to do it well because actors are trained to make scripted lines sound spontaneous; Richard Nixon was notorious for not being able to sound sincere, whether or not he was. And Hillary Clinton is often judged harshly because she can’t make clichés sound sincere, while other politicians (and not just male politicians) can recite the same clichés and be praised for their direct communication.

So the delivery of her speech tonight could sound very careful and rehearsed. Some public speakers can make a speech sound like conversation, and others let you hear that they’re making a speech. Clinton happens to be one of those speakers who lets you hear the effort it takes to make a speech, to enunciate clearly, to make the inflection of your voice brighten when making a joke. And despite her long experience in politics, she still seems to be uncomfortable with the show business tricks of politics. Elizabeth Warren and several other speakers at this convention have had a better sense of how to play to the TV cameras while ostensibly delivering a speech to the people in the room. Clinton may benefit from the way comedians like Samantha Bee now think it’s their duty not to make fun of her. But there certainly are things that comedians could make fun of, if they want to.

Does any of this really matter? Probably not. The show business aspect, and the ability of presidents to deliver a speech, is obsessively covered because the delivery of a speech is often more surprising than the content. But it probably doesn’t have much to do with whether someone will govern well, or even whether they’ll win. Donald Trump got the nomination even though he spends most of his time just talking off the top of his head, and he’s competitive in the polls even though his convention speech was delivered in a sustained shout. He’s winning because a lot of people like what he has to say. Opponents of Reagan or Bill Clinton or Obama often attributed their success to their speaking ability, when it was more likely that a lot of people just liked what they had to say.

So the question is whether enough people will like what Clinton has to say and the way she chooses to present herself. And the way she always wants to present herself is as a practical, sane person who gets things done. Ever since she started her political career, the image she has wanted to project most of all is of being serious, “qualified,” someone who will immerse herself in the details that her opponents ignore. The most famous political ad of her career so far was one where she portrayed herself as being more qualified than Obama to handle national emergencies at 3 o’clock in the morning. Now that her opponent is Donald Trump, it makes sense for her to ramp up that contrast: dismiss him as offering “empty promises” while she’s offering practical solutions. She once again argued that her opponent can’t be trusted to handle a crisis as president, and more people are going to believe that when it’s Trump rather than Obama. If Trump wanted people to see America as a disaster that only he can fix, Clinton wants us to see her as the adult, the other guy as an overgrown child whose complaints are also childish.

She also isn’t the kind of politician who fills her speeches with what is generally termed “soaring rhetoric.” Clinton sees herself as a pragmatist without a lot of time for people who wish for the moon. She criticized Obama for this in 2008, she criticized Bernie Sanders the same way this year, and in a meeting with Black Lives Matter activists last year, she expressed her impatience with rhetoric that isn’t rooted in solid, achievable policy goals: “Look, I don’t believe you change hearts. I believe you change laws, you change allocation of resources, you change the way the systems operate.” Her view is the view that predominates at “wonkish” liberal journals like Vox, where you identify the achievable programs that are best suited to create the kind of society you want.

And so the speech resembled a list of policies that she will pursue, and how she’s going to achieve them. In some ways, that’s a more modest view of the presidency than people who think the office has the power to change the culture and turn the world around. And it might appeal to some of the suburban swing voters the Democrats are targeting: people who are turned off by radical proposals and radical change. This year, the Republicans are openly running as the radical party; even if it weren’t her usual inclination, it might make sense for Clinton to run as the candidate of safety and continuity.

But this is an era when the idea of settling for what you can realistically achieve is not going down well with a lot of people. Trump is the Republican nominee right now because he made a lot of promises that his voters liked so much, they almost don’t care if he can keep them. The idea of restoring the past “great” America is so appealing to so many people that they don’t care to be told it’s impossible. This is a year when strange and unprecedented things seem to be happening everywhere, and when a lot of people have demonstrated that they would rather blow things up than continue as usual. The question is, is there a majority in America that is genuinely pessimistic about the future, and would prefer to risk everything on the off-chance of turning things around? Or is the American majority one that would like things to be as they are, maybe a little better? The answer to that question may be more important than the delivery of any one speech.