Maclean’s Bulldog, Sept. 22: Your daily rundown of what happened on the U.S. campaign trail 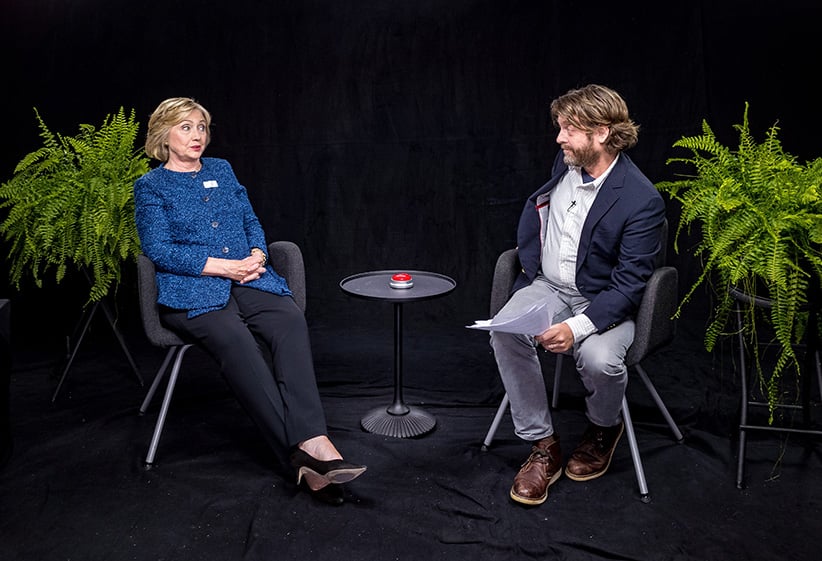 Sept. 22, 2016: Hillary Clinton’s making a serious appeal to the the Millennial voter, first by appearing on the popular web comedy series Between Two Ferns, and then by introducing policy meant to please Bernie Sanders and his legion of young supporters. Donald Trump, meanwhile, clarified his views on police “stop and frisk” practices, and was up for talking about Monday’s debate—and his opinion of the moderator’s ideal role.

It’s a direct appeal to the Bernie Sanders voting bloc: Clinton announced Thursday that, as president, she would levy a top tax rate of 65 per cent on the richest estates—a rate that would affect singles with assets exceeding $500 million or married couples with more than $1 billion. That represents a marked increase from her previous proposal of a 45 per cent top rate. Clinton’s new proposal would also close a loophole that allows wealthy Americans to pass assets to their heirs after death without paying tax on the assets’ appreciated value. That means if Trump, a self-described billionaire, loses to Clinton come election time, that loss could have a secondary impact on his tax filings.

Aside from the press conferences that seem to double as advertisements for his hotels, resorts and golf courses, Trump’s campaign had already paid Trump-owned business $8.2 million thus far in election season, according to Politico. Payments have covered office space, food, those on the corporate employee payroll, event facilities and more. When the bill is tallied up, Trump’s businesses have garnered seven per cent of the $119 million his campaign has spent. When you pump $54 million of your own cash into a campaign, may as well keep as much as possible under your company’s umbrella.

Clinton answered hard-hitting questions like, “What happens if you become pregnant?” and, “Any regrets over losing the Scott Baio vote?” during her appearance on the web comedy series Between Two Ferns. Clinton apparently pitched the idea to appear on the sketch show, where comedian Zach Galifianakis improvises a series of oddball questions that leave his guests simply shaking their head. The appearance might appeal to Millennial voters, a group that has so far been slow to embrace Clinton, by showing she can take a joke at her own expense—and show off her humour in the next breath.

With the first presidential debate coming on Monday, Trump said he’d prefer Lester Holt be a moderator instead of a fact-checker. “If she makes a mistake or I make a mistake, we’ll take each other on,” Trump told Fox & Friends on Thursday. “But I certainly don’t think you want Candy Crowley again.”

Crowley moderated one debate in 2012 between President Barack Obama and Mitt Romney, where she fact-checked one statement by Romney on the spot when he said Obama took 14 days to call the attacks in Benghazi an act of terror. She corrected the Republican nominee by saying Obama did indeed call the Libyan attack an act of terror in its immediate aftermath.

“That was a very pivotal moment in that debate. And it really threw the debate off and it was unfair,” Trump said. ”So I don’t think you want that. No, I think you have to have somebody that’s just—let them argue it out.”

The truth is, if moderators did try to fact-check the debates live (as journalists should), they’d could very well have their hands full with Trump.

“I don’t think there was any racism until Obama got elected,” said Kathy Miller, who—until she told these words to the Guardian, was Trump’s campaign chair in Mahoney County, Ohio. “If you’re black and you haven’t been successful in the last 50 years, it’s your own fault. You’ve had every opportunity, it was given to you.”

The 16 per cent of the county’s population who are African-American would disagree—as does Trump’s Ohio team, which quickly distanced itself from Miller by calling her a volunteer, not a spokesperson.

When Trump was saying that he wants to expand police “stop and frisk” tactics to deal with inner-city crime, he clarified on Thursday that he was only talking about Chicago, adding the city has suffered more than 3,000 shootings this year.

Trump points to the tactic’s success in making New York City safer, even though the practice was deemed unconstitutional in 2013 because it punished people of colour disproportionately.

Compared to Clinton’s TV ads—which continue to blanket coverage in battleground states like Florida, Ohio, Pennsylvania and North Carolina—Trump’s television presence for adverts is almost invisible. One report had Trump paying out $17 million for ad buys, as of Sept. 12, while Clinton’s campaign had already shelled out $126 million. Trump is employing an unusual strategy, at least compared to that of previous election campaigns, but then again Trump has risen in the polls—and clearly has no problem getting face time on TV.