It's time to stop thinking about Trump and start asking, 'What kind of president will Clinton be?' 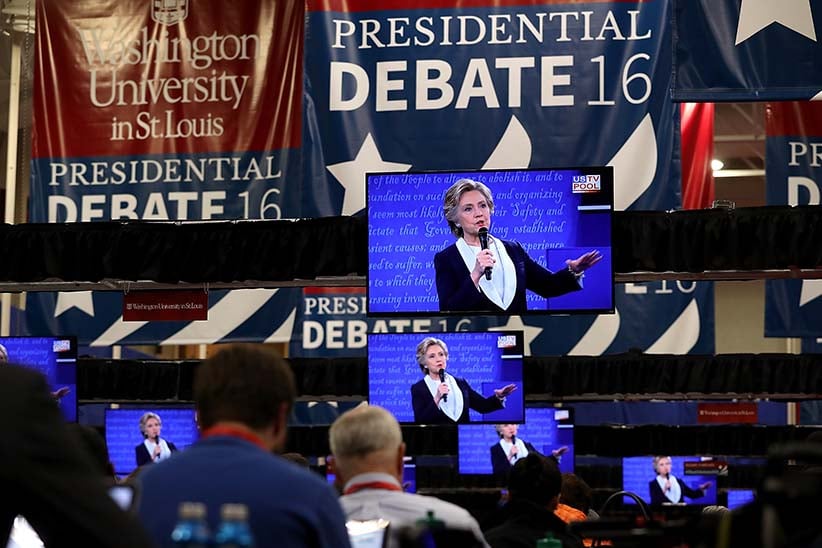 Hillary Clinton appears on a monitor in the media center during the second presidential debate. (Justin Sullivan/Getty Images)

Although he bickered repeatedly with moderators and treated his running mate’s foreign policy ideas like a crumpled-up ball of paper, this was not a disaster of a debate for Donald Trump—yet he also did not have a turnaround victory Sunday night. This means that Hillary Clinton will begin the fourth-last week of the campaign as the leader and probable next president of the United States.

It’s time to stop spending so much energy thinking about Trump and whether he has a shot at winning and how much of a disaster he’d be in charge, though these are the more fun scenarios to consider. They’re no longer probable scenarios. It’s time to focus thought on what kind of president Hillary Clinton will be, and looking at events like the debate for such clues.

As sure as Trump craves ratings and his sensational history attracts eyeballs, there will be more shocking moments unveiled, both by him and for him. And as sure as there is a 40-year record of Clinton in the public eye as first lady and politician, there will be more compromising dirt dug up on her. But the sizzle and pop of the election campaign’s final month—overwhelmingly on the Trump side, as it has been since last June’s campaign launch—won’t likely reverse the tide that begins this second week of October.

Head-to-head national polling has Clinton topping Trump by 4.6 per cent, according to the Realclearpolitics.com average. (In 2012, Obama won the election comfortably by 3.9 percentage points.) Nate Silver’s FiveThirtyEight polls-only election forecast gives Clinton an 81.5 per cent chance of winning, with 330 electoral college votes instead of the 270 required to win—Silver’s best score for her since late August. These are both almost entirely based on polling conducted before the release of Trump’s shocking boasts about groping and vulgarly pursuing sex with married TV hosts “like a bitch”—comments that led scores of Republican politicians and supporters to finally jump off the runaway Trump train before it sped into no-go zone and plunged into the gully. It’s hard to say what further deficit Trump will find himself in once this outrage is baked into public opinion research; it’s easier to predict that this debate won’t suddenly offset all that and make it a tight Clinton-Trump race.

So the question shouldn’t be how Clinton fared vis-a-vis her debate opponent: it should be what she conveyed to Americans and the world.

She’s a lousy apologizer, too

Clinton once again provided some terse but excuse-free contrition for her improper keeping of a private email server for her four years of State Department emails, which put classified and sensitive information at greater risk of hacking and security breaches than a government server would have. She’s at least stopped offering misleading or patently untrue excuses about predecessors doing the same thing. But what she hasn’t done yet is accept the fact that she put sensitive information at jeopardy without much of a good reason:

Americans likely owe it more to hope and good fortune than to Clinton’s good secret-keeping skills that the private server wasn’t hacked. At very least, she repeatedly says she won’t do it again, and you can be certain a President Hillary Clinton will be watched closely for any such improprieties.

For the second straight debate, Clinton never appeared overly rattled by the extreme accusations and barbs that Donald Trump threw in her face. During his extended riff on Bill Clinton’s past philandering and alleged abuse—low blows for which Trump gave her two weeks to brace herself—she remained calmly smiling, unmoved. Surely Clinton has faced harsh, sexist and brashly accusatory figures before in her years as senator and secretary of state, and there are many more heads of state who may give her the same treatment. The probable next U.S. president has shown she can keep her cool in the face of such antics. It’s a more relaxed and confident demeanour than Barack Obama has visibly shown in his own debate confrontations, as much as he likes to play the cool cucumber.

The town hall debate finally featured a question about the Supreme Court, which has an opening on the bench after the death of Antonin Scalia—and could soon see further retirements and vacancies beyond that. In 2008, here’s what Obama said about how he would choose top court nominees:

What I do want is a judge who is sympathetic enough to those who are on the outside, those who are vulnerable, those who are powerless, those who can’t have access to political power and as a consequence can’t protect themselves from being—from being dealt with sometimes unfairly, that the courts become a refuge for justice.

Contrast that to Clinton’s answer Sunday, which burrowed deeper into specific policy goals:

Influenced somewhat by Bernie Sanders’s firm position on limiting donors’ political influence, Clinton has made that a hard goal of her judicial decisions. Gay marriage was a different issue in 2008 or even 2012 than it is now, as a legal right across America. And Democrats have long been supportive of abortion rights, but seldom are the party’s presidential nominees so unabashed about wanting to pick a pro-choice Supreme Court justice. Obama’s picks have not been subject to such stated policy tests, including Merrick Garland, the choice he made this year that congressional Republicans have thus far stymied. She may be tacking to the right of Obama on some issues, such as being potentially more hawkish militarily, but her judicial progressivism stands to harden her liberal base and keep some conservatives off her team.

Trump’s candour and demeanour are and will continue to be more discussion-worthy, more attention-grabbing. Dissecting Clinton’s performance in isolation isn’t a way of saying maybe she doesn’t deserve the job against him. We should think about what kind of president she would be not because of the alternatives, but with the realization that it’s probably coming, and will bring its own great array of challenges and opportunities. The question should not continue to be whether Clinton would be a better president than Trump, because that is a dreadfully low bar to set.