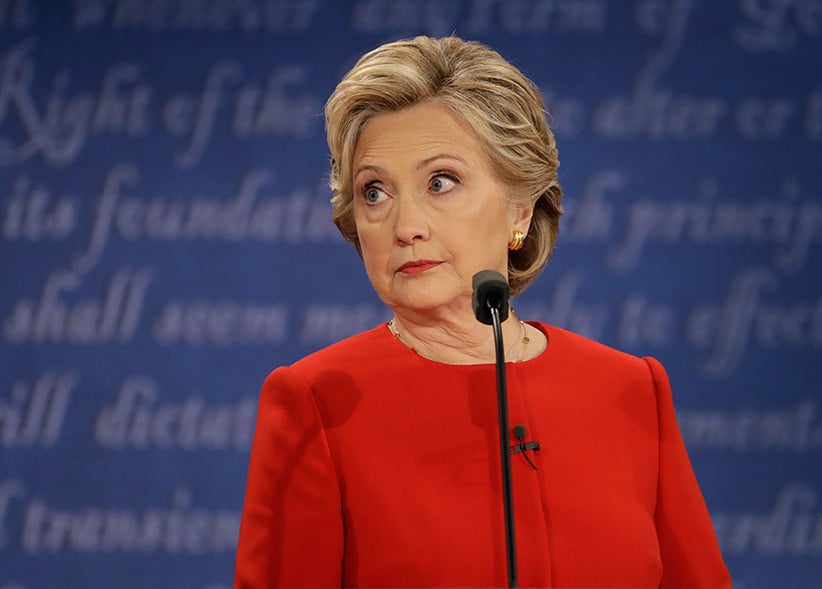 Rallying supporters in Florida, Clinton pressed FBI Director James Comey to put out the “full and complete facts” about the review into a cache of recently discovered emails. Clinton backers panned Comey’s letter to Congress about the new emails as severely lacking crucial details.

“It is pretty strange to put something like that out with such little information right before an election,” Clinton said. She accused Trump of using the issue to confuse and mislead voters in the final leg of the campaign for the Nov. 8 election.

The controversy over Clinton’s email practices at the State Department has dogged her for more than a year. The former secretary of state has often been reluctant to weigh in on the matter ± and defensive when she’s been pushed to do so.

But Clinton’s approach to this latest flair-up is markedly different, underscoring worries that the matter could damage her standing with voters in the election’s final days. Clinton advisers have been rallying Democratic lawmakers and other supporters to her defence, including members of the Congressional Black Caucus.

Earlier Saturday, Clinton campaign chairman John Podesta said there was “no evidence of wrongdoing” in the new email review and “no indication this is even about Hillary.” But Comey, who enraged Republicans in the summer when he announced the FBI would not prosecute Clinton for her loose handling of official email, in fact said the new trove appeared to be “pertinent” to the Clinton email investigation. He did not explain how.

A government official told The Associated Press on Saturday that the Justice Department had advised the FBI against telling Congress about the new developments in the Clinton investigation because of the potential fallout so close to the election. The official was not authorized to speak publicly about the matter and discussed it on condition of anonymity.

Justice officials concluded the letter would be inconsistent with department policy that directs against investigative actions that could be seen as affecting an election or helping a particular candidate, the official said.

Landing with a thud, the email issue again threatened to undermine an advantage built by Clinton, the Democratic nominee, over Trump and raised the possibility that the Republican might be able to seize late momentum.

Trump told a crowd in Golden, Colorado, on Saturday that the FBI’s review of Clinton email practices raises “everybody’s deepest hope that justice, as last, can be properly delivered.” His crowd cheered Clinton’s email woes, which Trump has taken to calling the biggest political scandal since Watergate.

The FBI is looking into whether there was classified information on a device belonging to Anthony Weiner, the disgraced ex-congressman who is separated from longtime Clinton aide Huma Abedin. Comey, in his letter to Congress on Friday, said the FBI had recently come upon new emails while pursuing an unrelated case and was reviewing whether they were classified.

Trump mused aloud during his rally about whether Clinton was “going to keep Huma,” adding that Abedin has “been a problem.” He hurled insults at Weiner, warning again that the former congressman posed a national security risk because of his access to information through his estranged wife. Abedin, a close Clinton confidant who is a near constant presence in the campaign, was not travelling with Clinton on Saturday.

The FBI announcement raised more questions than answers and generated criticism that Comey was injecting a significant development too close to an election. Yet the FBI director also faced the prospect of intense scrutiny if voters learned that he had been sitting on a major development until after the election.

New York Rep. Gregory Meeks suggested the FBI chief might be trying to sway the election and called for him to disclose what he knows. Clinton herself said of Comey: “Put it all out on the table.”

Long term, the development all but ensured that, even should Clinton win the White House, she would celebrate a victory under a cloud of investigation. Comey, who was appointed in 2013 to a 10-year term as FBI director, would still be on the job if Clinton wins the White House.

Congressional Republicans have already promised years of investigations into Clinton’s private email system. And that’s only one of the email-related episodes facing her in the campaign’s closing days. The tens of thousands of confidential emails from Clinton campaign insiders that were hacked — her campaign blames Russia — and then released by WikiLeaks have provided a steady stream of questions about her policy positions, personnel choices and ties with her husband’s extensive charitable network and post-presidential pursuits.

In his letter to congressional leaders Friday, Comey wrote only that new emails have emerged, prompting the agency to “take appropriate investigative steps” to review information that appeared pertinent to its previously closed investigation into Clinton private email system.

Clinton’s campaign is hoping the issue will fire up its base of voters who feel the secretary has been unfairly targeted in a litany of investigations, but it could also revive some Clinton fatigue.

Given a political gift from the FBI, Trump’s challenge now becomes avoiding any big missteps that might overshadow Clinton’s troubles over the campaign’s final days. If history is a guide, that won’t be easy.

Inside Trump’s Colorado rally, his supporters worried whether he could stick to his message about the emails.

“It scares me,” Howard Sanger, 56, of Parker, Colorado said of the prospect of another Trump gaffe. “But I feel like his inner circle will stop him.”