Maclean’s Bulldog, Sept. 15: Your daily rundown of what happened on the U.S. campaign trail 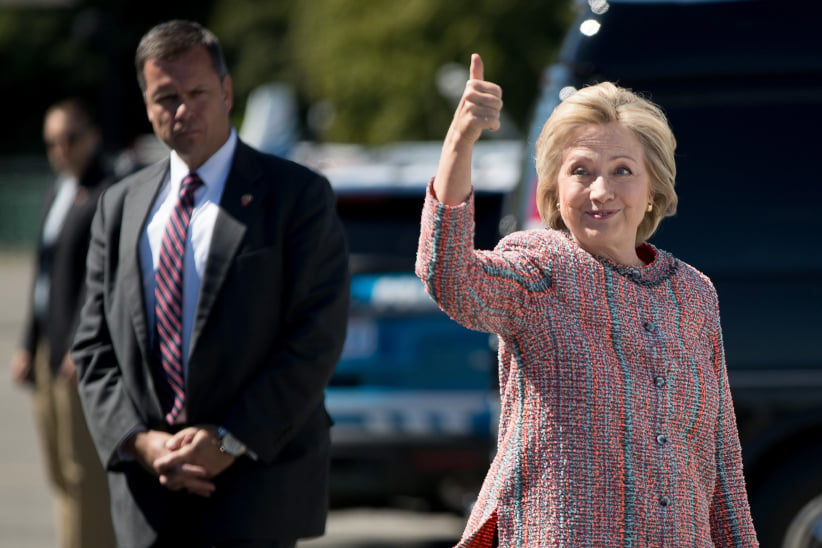 Hillary Clinton gives a thumbs up as she arrives to board her campaign plane at Westchester County Airport in White Plains, N.Y. (Andrew Harnik/AP)

Back on her feet

The mere fact that Clinton appeared at an event in North Carolina on Thursday is news in itself after the Democratic nominee was encouraged to take a few days off in the aftermath of a pneumonia diagnosis—and later stumbled at a 9/11 commemoration event. In her first major public appearance since the near-fall, Clinton opened by telling the Tar Heel State crowd: “I certainly feel lucky. When I am under the weather, I can afford to take a few days off. Millions of Americans can’t. They either go to work sick or they lose a paycheque.” That said, not all Americans risk losing their chance at the Oval Office by taking a few sick days.

While Clinton sat on the sidelines, Trump bolstered his bid for the White House by gaining serious momentum in several key swing states. Various state polls now have Trump leading in Florida, Ohio, Nevada, and by a large margin in Iowa. And a new nationwide poll of likely voters’ choices from the New York Times found that Clinton and Trump are deadlocked at 42 per cent apiece.

Trump has always claimed that African-Americans love him, and he’s sticking to that script even after a trip to a black church in Flint, Mich., where the pastor shut down his speech. Trump is now claiming that Rev. Faith Green Timmons, who asked him not to get political, was “a nervous mess”—and probably intended to sabotage his speech (“she had that in mind, there’s no question”). He also claimed that the crowd at the Flint church was saying, “Let him speak,” when it was Rev. Timmons who had to ask hecklers to respect Trump.

Hillary Clinton won’t commit to re-nominating President Obama’s stalled Supreme Court nominee, instead saying that she will look “broadly and wisely for people who represent the diversity of our country.” Obama nominated Merrick Garland for the seat held by the late Antonin Scalia, but the Republican-controlled Senate has declined to consider his nomination. Neither Clinton nor Obama have ruled out the possibility that Garland might be considered by the Senate during the lame-duck session that follows the November election.

Trump repeated his plans to keep the auto sector from moving manufacturing plants overseas to places like Mexico. If they do threaten that sort of move, Trump says if elected, he’d impose a 35 per cent tariff on cars produced outside the U.S. “They’ll never leave in a million years,” he told Fox & Friends Thursday morning. “And if they want to leave, we’re going to make a lot of money, because they’ll have to pay the tax.” The proposal should do well in states such as Michigan and Ohio, where plants moving abroad have left many locals searching for work—but Americans may be none too pleased if protectionist policy makes that new Ford F-150 more expensive.

The Land of Oz

After a teaser video on Wednesday showed Trump giving TV celebrity Dr. Oz a letter of health from Trump’s doctor, the Republican nominee released the exact contents of the letter to the public on Thursday. While the document does not disclose his full medical records—which he once promised to release—it did offer a small glimpse into a recent checkup. Dr. Oz later told reporters that Trump is “healthy enough to be president.”

Clinton, meanwhile, unveiled a doctor’s note of her own. After her stumble on Sept. 11 was caught on video—forcing her to take a few days off from campaigning in public—Clinton’s doctor also found her healthy and fit to serve as president, with her only notable medical conditions being recently diagnosed pneumonia and a sinus infection from earlier this year.

This interview is over

Ivanka Trump cut short an interview with Cosmopolitan  after the interviewer veered into her father’s child care policy—including her father’s previous comments that pregnancy was “inconvenient for business”—as Ivanka complained about “negativity” in the questions. Also on Thursday, when Donald Trump Jr. was asked about Trump Foundation charity funds—specifically reports that Trump Sr. used $20,000 worth of charity dollars to buy a six-foot-tall portrait of himself—his handlers cut short his interview with WTAE Pennsylvania.

Trump Sr. won’t act surprised. With the American public’s faith in media at an all-time low, according to a new Gallup poll, the Republican nominee appeared on New York radio Thursday morning and took credit for the record media distrust, saying he has exposed them.

A poor choice of words

Donald Trump Jr. accused the media of letting Clinton get away with lies in order to push her Democratic opponent, Bernie Sanders, out of the running for president. “If Republicans were doing that,” Trump said, “they’d be warming up the gas chamber right now.” The comparison was not well received, as it appeared to make light of gas chambers used in the Second World War. In the face of the uproar, Trump Jr. replied that he was talking about the death penalty, not the Holocaust. Regardless, he’ll be wise to veer away from any talk of “gas chambers” for the rest of the campaign.

Recommended reading: Florida voted Democrat in the last two presidential elections. It has a booming Hispanic population. Clinton outspent Trump sevenfold in TV ads last week in the state. And Trump has just moved ahead of Clinton in the polls. How is this possible? Read Politico’s “Why Florida is still in play for Trump.”