Hillary Clinton: 'This is painful, and it will be for a long time' 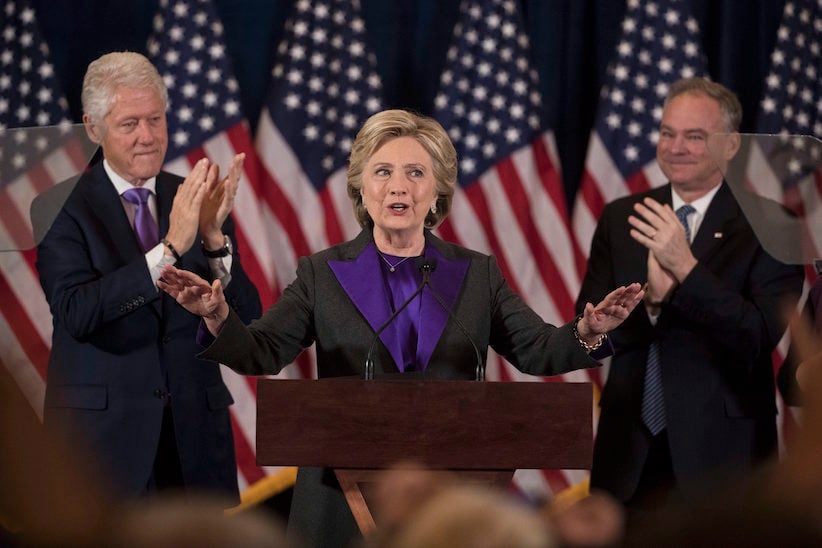 NEW YORK — Gone was the ballroom with a soaring glass ceiling, the confetti and the celebrity guest stars. Instead, Hillary Clinton looked out to a group of grief-stricken aides and tearful supporters, as she acknowledged her stunning loss of the presidency to Donald Trump.

“This is painful,” Clinton said, her voice crackling with emotion, “and it will be for a long time.” But she told her faithful to accept Trump and the election results, urging them to give him “an open mind and a chance to lead.”

Before Clinton took the stage at a New York City hotel, top aides filed in, eyes red and shoulders slumped, as they tried to process the celebrity businessman’s shocking win after a campaign that appeared poised until Election Day to make Clinton the first woman elected U.S. president.

Clinton, who twice sought the presidency, told women: “I know we have still not shattered that highest and hardest glass ceiling. But someday, someone will and hopefully sooner than we might think right now.” Her remarks brought to mind her 2008 concession speech after the Democratic primaries in which she spoke of putting “18 million cracks” in the glass ceiling.

“To all the little girls who are watching this, never doubt that you are valuable and powerful and deserving of every chance and opportunity in the world to pursue and achieve your own dreams,” she said as her husband, former President Bill Clinton, stood wistfully by her side.

In perhaps a subtle nod to bridging the red state and blue state divide, Clinton wore a purple blouse and a dark blazer with a purple lapel while her husband wore a purple tie.

It may have been the final public act for the enduring political partnership of the Clintons, who appeared on the verge of returning to power after 16 years. If Clinton had won, it would have marked the first time a former first lady was elected U.S. president.

Clinton’s campaign was trying to make sense of a dramatic election night in which Trump captured battleground states like Florida, North Carolina and Ohio and demolished a longstanding “blue wall” of states in the Upper Midwest that had backed every Democratic presidential candidate since her husband won the presidency in 1992.

As Democrats were left wondering how they had misread their country, mournful Clinton backers gathered outside the hotel Wednesday.

“I was devastated. Shocked. Still am,” said Shirley Ritenour, 64, a musician from Brooklyn, New York. “When I came in on the subway this morning there were a lot of people crying.”

Flanked by her husband, daughter Chelsea Clinton and running mate Virginia Sen. Tim Kaine, Clinton said she had offered to work with Trump on behalf of a country that she acknowledged was “more deeply divided than we thought.”

The results were startling to Clinton and her aides, who had ended their campaign with a whirlwind tour of battleground states and had projected optimism that she would maintain the diverse coalition assembled by President Barack Obama in the past two elections.

On the final day of the campaign, Clinton literally followed Obama to stand behind a podium with a presidential seal at a massive rally outside Independence Hall in Philadelphia. As she walked up to the lectern, the president bent down to pull out a small stool for Clinton. Before leaving the stage, Obama leaned over to whisper in Clinton’s ear, “We’ll have to make this permanent.”

The devastating loss for the party, which will no longer hold the White House and will continue to be in the minority of both chambers of Congress, was certain to open painful soul-searching among Democrats, who had endured a lengthy primary between Clinton and Vermont Sen. Bernie Sanders. The so-called democratic socialist drew strong support among liberals amid an electorate calling for change but then backed Clinton’s general election bid.

Yet her team spent the bulk of their time focused on attacking Trump, while failing to adequately address Clinton’s deep liabilities — or the wave of frustration roiling the nation.

Every time the race focused on Clinton, her numbers dropped, eventually making her one of the least-liked presidential nominees in history. And she offered an anxious electorate a message of breaking barriers and the strength of diversity — hardly a rallying cry — leaving her advisers debating the central point of her candidacy late into the primary race.