How did Anthony Weiner end up in U.S. campaign?

NEW YORK — Once a hard-charging young congressman, Anthony Weiner lost his career and his marriage to a habit of trading sexually explicit messages that he couldn’t shake — a lurid tale of personal self-destruction that’s suddenly found its way into the race for president.

Weiner is separated from Huma Abedin, the vice chairwoman of Hillary Clinton’s campaign and one of the Democratic nominee’s closest aides. It’s the federal investigation into his sexting habits that is the “unrelated case” that led the FBI to a new batch of emails, which agency director James Comey told Congress on Friday may be “pertinent to our investigation” into Clinton’s use of a private email server as secretary of state.

And that has once again cast a spotlight on Weiner, one-time rising Democratic Party star whose very name has become a punchline.

Weiner was forced to resign his seat in Congress in 2011, after accidentally posting a picture of himself in his underwear — a private message intended for a woman who was not his wife — to his Twitter account.

Abedin stood by him, and he had the audacity to ask for the voters’ forgiveness and run for mayor two years later. He spent time atop the polls, until fresh evidence emerged that he hadn’t given up his sexting habit and destroyed his campaign.

When Weiner was caught again sending racy messages last summer, Abedin left him. Federal investigators started a probe in September into whether he had sexted with a 15-year-old girl.

“I am filled with regret and heartbroken for those I have hurt,” Weiner said after he and Abedin separated, lamenting what he called his “terrible judgment.” 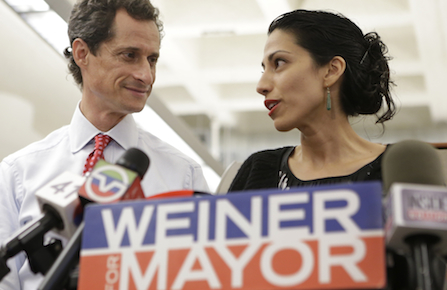 The former congressman did not respond to repeated requests for comment Saturday, as the impact of his sexting extended far beyond his household.

Clinton, who has referred to Abedin as a “second daughter,” lashed out Saturday at the FBI’s handling of a new email review that arrived as unexpectedly as did the revelation that Weiner was involved.

The development led to a chorus of Democratic leaders decrying the bureau’s actions, which came with a little less than two weeks remaining before Election Day. Clinton called it “unprecedented” and “deeply troubling,” and her campaign chairman, John Podesta, said there was “no indication this is even about Hillary.”

The brash, liberal, ambitious and media-savvy Weiner spent seven terms in the House, building a profile as “a Democrat who fights”— an amateur hockey player always ready for a face-off with Republicans.

Some critics saw him as heavy on self-promotion and light on legislative accomplishments. But liberal supporters cheered his willingness to confront the GOP on such issues as public radio funding, Planned Parenthood, health benefits for 9-11 first responders and President Barack Obama’s health care plan.

Wise-cracking and scrappy, Weiner once suggested C-SPAN viewers start a drinking game in which they’d down a shot for every Republican misstatement during a debate on the health care plan — “please assign a designated driver,” he quipped.

As Twitter became popular, he proved a natural at delivering provocations, 140 characters at a time. And then it proved to be his undoing.

But after more racy messages and photos emerged, Weiner acknowledged engaging in “inappropriate” exchanges with several women. He said he was getting treatment and resigned at a chaotic news conference, compete with hecklers shouting such comments as, “Bye-bye, pervert!”

Weiner, however, wasn’t out of the public eye for long.

In 2013, he belatedly jumped into the race for mayor of the nation’s biggest city, a prize he’d eyed since a strong primary run in 2005. “I think that it’s up to New Yorkers to decide whether I get a second chance or not, and I hope the answer’s yes,” he told The Associated Press.

While some voters were aghast, Weiner topped polls of the primary field for several weeks until a woman went public with smutty messages and photos she said the candidate had sent to her, using the alias “Carlos Danger.”

He acknowledged he’d found new sexting partners after his resignation from Congress, saying he’d since stopped. But his mayoral bid disintegrated into angry exchanges with voters and ended with a middle-finger farewell to reporters after he lost the Democratic primary.

Still, Weiner didn’t entirely leave the public stage. Over time, he re-emerged as an incisive political observer on a local cable news station, in one of the city’s tabloids and on Twitter, until his reputation unraveled still further earlier this year.

This past spring, a documentary feature film about his mayoral bid made viewers wince as they watched how he and Abedin had tried to keep the campaign and their marriage going.

Then, in August, a new batch of sexts became public, including a bulging-underwear shot — with Weiner and Abdein’s toddler son in the frame — that a woman said she’d received from Weiner in 2015.

By then deeply engaged in Clinton’s campaign, Abedin issued a short statement saying she had decided to leave Weiner. “Anthony and I remain devoted to doing what is best for our son, who is the light of our life,” it said.

Weeks later, a 15-year-old girl told DailyMail.com that Weiner had sent her sexually explicit text and video messages. Weiner acknowledged communicating with her, but suggested her claims of X-rated exchanges were a hoax.

He added: “I have no one to blame but me for putting myself in this position.”