Evan Solomon: An extreme off-shoot needs to be excised from the conservative movement. If the U.S. president won't draw the line, who will? 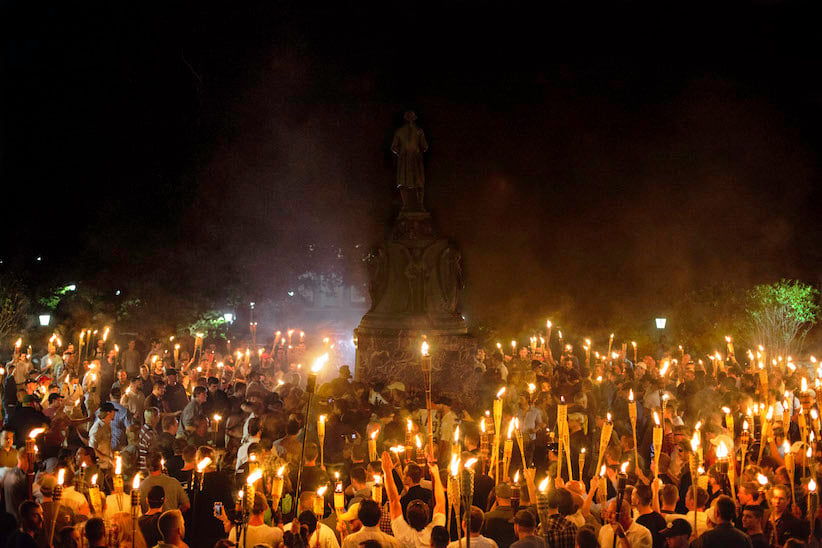 Marchers at a white-supremacy rally encircle counter protestors at the base of a statue of Thomas Jefferson after marching through the University of Virginia campus with torches in Charlottesville, Va., on Aug. 11, 2017. (Shay Horse/NurPhoto via Getty Images)

It’s gut-check time for conservatives in the U.S. The obscene trifecta of neo-Nazis, White Supremacists and the KKK used the Charlottesville violence to re-vivify their putrid ideas, feeding like a parasitic oxpecker on the host body of the Republican elephant.

It should be the most obvious ploy to condemn—there is no more basic political rule than “see a Nazi, denounce a Nazi,” but the current president has so far failed this fundamental moral litmus test by continuing to draw false moral equivalences between Nazis and protest groups like Black Lives Matter. In doing so, Trump has enflamed a culture war not only within his own country, but one that risks, among many thing things, doing long-term damage to legitimate conservative thinking all over the world.

To be fair, conservatives of all kinds, whether Republicans in the U.S. or here in Canada, have done the right thing. From Republican senators like Orin Hatch, whose brother was killed fighting the Nazis, to Bob Corker, all but the most mealy-mouthed enablers of the far right have openly and clearly denounced the horrible racism seen in Charlottesville and elsewhere. This is as expected, even if it’s sad that it has to be done in 2017.

So we should be careful not to draw sloppy comparisons between the racists in Charlottesville or the conspiracy-minded hate-mongers on sites like InfoWars with legitimate conservative supporters who have spent generations building parties, fighting for causes and accomplishing so much in free societies. This is a radical, extreme and horrible off-shoot that needs to be excised from conservative parties the way, in the 1960s, the John Birch Society with racist and paranoid ideas was purged from the Republican party by the likes of William F. Buckley.

In this debate, words matter. Back in January, I wrote in this magazine that the phrase “alt-right” should be avoided because, I argued then, it was a euphemism to rebrand racists as a new, acceptable element within the movement of legitimate conservatism. It’s disingenuous today to see the same people who had once so opportunistically and openly embraced that title now scatter in mock shock, as if the racist undertones were in any way difficult to detect. What took them so long?

It was clear a long time ago from the crowds chanting luggenpresse at the media (an old Nazi term for the “lying press”) or blandly talking about the “JQ”, the “Jewish Question” as now former Rebel Media contributor Faith Goldy recently did, that Trump, his then-advisor Steve Bannon and many others were playing political footsies with the far right—under the table, high-priced oxfords rubbing up against the metaphoric jackboots on the extreme fringe. It was a dangerous liaison that is now politically costly.

In what has become one of Trump’s worst and most chaotic weeks, CEOs who were once his core value proposition as a candidate turned on him over his leadership failure in Charlottesville. Trump was forced to disband his Manufacturing Council and his Strategy and Policy group after CEOs from Intel, Merck and Under Armour all bolted. When the CEO of Campbell Soup left, the Rubicon was crossed. “Racism and murder are unequivocally reprehensible and are not morally equivalent to anything else that happened in Charlottesville,” Campbell CEO Denise Morrison wrote. “I believe the president should have been—and still needs to be—unambiguous on that point.” Call that the “Campbell Soup Test.” When you lose the people who make Campbell Soup, you’ve lost Middle America.

Trump was always a hard sell for Republicans because he was an outsider, but he was also a winner. His very status as political neophyte became his prime asset to Americans who had lost faith in Washington politicians. But just because Trump lacks a coherent ideological framework doesn’t mean he can go without a moral one. But now Republicans are seriously questioning if Trump has any other moral litmus test besides loyalty.

Politicians are not the only ones wondering. Members of police forces have been forced to ask the same thing after Trump told them in a speech to treat suspects roughly when making arrests. “I said, please don’t be too nice,” Trump said. “Like when you guys put somebody in the car and you’re protecting their head, you know, the way you put their hand over, like, don’t hit their head and they’ve just killed somebody. Don’t hit their head. I said, you can take the hand away, okay?” After that the Suffolk County Police Department, where Trump was speaking, had to release a statement saying, “as a department, we do not and will not tolerate ‘roughing’ up prisoners.” Police brutality is an explosive issue and the president was needlessly on the wrong side of the line.

READ MORE: The false equivalency of the criticism of the ‘alt-left’

The military also had to stand against the president when he suddenly and without warning announced that transgender Americans were no longer welcome in the armed forces. “We will continue to treat all of our personnel with respect,” said Joint Chiefs of Staff Chair Joseph Dunford, openly contradicting the president.

Even a terrorist event has turned into a litmus test. The horrific attack in Barcelona illustrated yet again the clear and present danger radical Islamist hatred poses to the world. Again, this requires leaders to clearly name it, condemn it and fight it. Trump initially did that in a tweet and that was laudable. But then, as in the case of Charlottesville, he slid back into the muck of division. “Study what General Pershing of the United States did to terrorists when caught. There was no more Radical Islamic Terror for 35 years!” he tweeted out.

It was an invocation of a false and racist narrative about U.S General John Pershing and how he allegedly dealt with Muslim terrorists in the Philippines over 100 years ago. According to Trump, who told the story in February of 2016 on the campaign trail in South Carolina, Pershing caught 50 terrorists and promptly executed most of them in brutal fashion. This is a transcript of Trump’s story: “He took the 50 terrorists, and he took 50 men and he dipped 50 bullets in pigs’ blood—you heard that, right? He took 50 bullets, and he dipped them in pigs’ blood. And he had his men load his rifles, and he lined up the 50 people, and they shot 49 of those people. And the 50th person, he said: You go back to your people, and you tell them what happened. And for 25 years, there wasn’t a problem.”

Organizations like Snopes have fact-checked this and there is no evidence Pershing ever did this—although some soldiers, without Pershing’s knowledge, did bury bodies with pig’s blood. But as bad as repeating the smear, Trump essentially condoned a war crime in the fight against terror.

His addition of these gruesome and false details is as disturbing as his argument in Charlottesville that there were “fine people” on both sides. Exactly who were the “fine people” marching with Tiki torches chanting “Jews won’t replace us” or standing with people waving swastikas? Were they really just innocent people wanting to defend the history of the southern culture? When David Duke, the former grand wizard of the KKK thanks you for a speech, should a little alarm bell not go off?

RELATED: Charlottesville and the politics of fear

Trump is in danger of fully legitimizing the far right’s pathetic victimization narrative which posits that minority groups have somehow taken over Western democracies, and that this the root problem affecting so many people on the bottom of the socio-economic ladder. His former strategist Steve Bannon, who bolted immediately back to Breitbart, sees the world through this lens. He casts the future as a war against “globalists,” a euphemism for those who champion diversity, multiculturalism and open trade. It’s a shocking distortion of important conservative philosophy that champions personal responsibility, free trade and moral codes, but it fuels a collective anger that links to a poisonous lineage of hate and violence.

The internet is an exacerbating factor. While there is no moral equivalence between, say, neo-Nazis and Black Lives Matter, there is an “availability equivalence” online. Hate literature, which was once confined to badly produced, hard-to-access pamphlets is now readily available. It is as easy to get thousands of pages of conspiracy-minded hate literature and hours of video as it is to get accurate historic facts.

The “Fake News” meme undermines legitimate journalism and facts and offers disaffected people counter-narratives that are often destructive but virtually impossible to fact-check. The world of information now functions as a form of asymmetric warfare and no one understands this more deeply than people like Steve Bannon. What he does outside the White House will be one of the most critical factors in determining how loyal Trump’s base remains.

If there is really a “war” coming, as Breitbart just warned, leaders have to take stock quickly. Which side will they be on? In this battle, distinctions between liberal and conservatives, progressives and libertarians should be put aside in favour of a unified stand against hate, especially in its camouflaged form. But conservatives have to realize that their movement and their brand, especially in the U.S., is under direct assault from the inside, from those using terms like “alt-right.” They are not real conservatives and should not be used for political gain. Many have waited for the president to draw this line. So far he hasn’t. Who in a chaotic White House will do it remains one of the great challenges of this presidency.