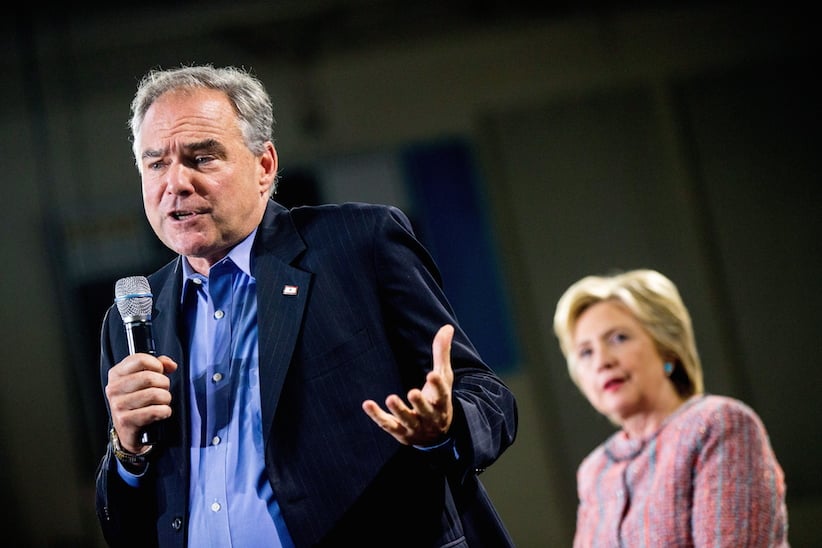 MIAMI — Hillary Clinton’s search for a vice-president started with a commanding victory in the New York primary and a special delivery in a plastic Duane Reade bag. Three months later, it ended with a phone call to a shipyard office, where Virginia Sen. Tim Kaine was waiting.

From the start, Kaine was a front-runner to join Clinton on the Democratic ticket. A senator, former Virginia governor and mayor of Richmond, he hails from a top battleground state and, as a fluent Spanish speaker, could help in another: Florida. Victories in both would likely put the White House out of the reach of Donald Trump and his running mate, Indiana Gov. Mike Pence.

But Clinton grew personally comfortable with the likable and even-keeled Kaine as they campaigned together in recent weeks and discussed the vice presidency. Clinton ultimately concluded that she had “unshakeable confidence in Kaine’s readiness to do the job,” according to a Clinton aide familiar with her thinking. The aide spoke on condition of anonymity to describe the private deliberations over her selection.

It wasn’t an easy decision. Clinton was also drawn to Agriculture Secretary Tom Vilsack, the former Iowa governor who remained in the running until the end. A person close to the campaign, also speaking on condition of anonymity to discuss the private deliberations, said Clinton had a hard time not choosing her longtime family friend and political loyalist.

Campaign chair John Podesta started the process after Clinton’s convincing victory over Democratic rival Bernie Sanders in April’s New York primary, dropping off binders of information with Clinton at her home in Chappaqua, New York. The information on potential running mates was delivered in a bag from Duane Reade, a New York drug store.

As Clinton dealt with an up-and-down series of primary contests against Sanders, her team delved deeply into several potential running mates, scouring public information and ultimately asking a select few to provide detailed financial and personal information, and consent to interviews. 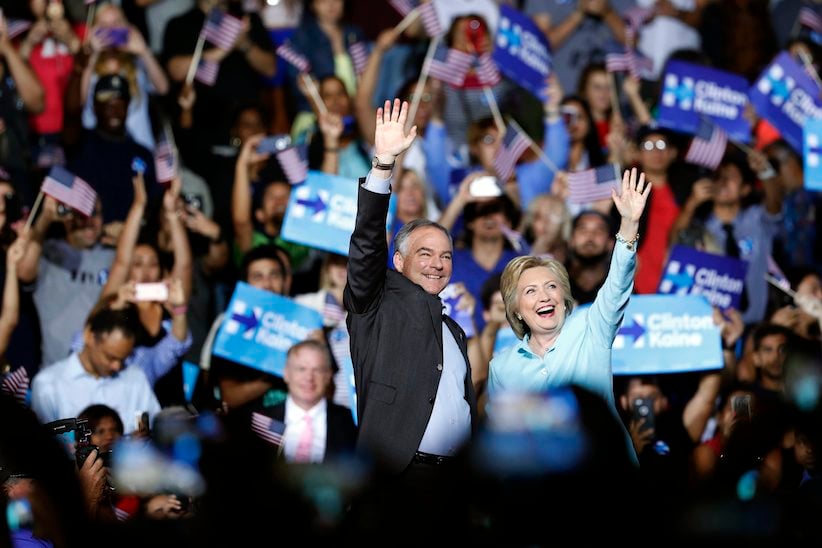 Clinton’s team maintained a tight control over the information. Her screeners included Washington attorney James Hamilton, former State Department chief of staff Cheryl Mills and Podesta, along with a group of attorneys and top aides.

As the process entered July, Clinton scheduled a joint campaign event with Kaine in Annandale, Virginia, where he showed off his bilingual abilities, telling the audience, “Estamos listos para Hillary!” — or “We’re ready for Hillary.”

Clinton and Kaine met that evening at her Washington home for 90 minutes, and she invited Kaine and his wife, Virginia Education Secretary Anne Holton, to her home in Chappaqua two days later. This time, lunch was served and the Kaines joined Bill Clinton and the Clintons’ daughter, Chelsea, and son-in-law, Marc Mezvinsky.

Kaine’s name remained at the top of the speculation for vice-president, but he kept his head down, telling reporters that he enjoyed being senator. He started the day of his selection at a fundraiser in Boston and then travelled to Newport, Rhode Island, to headline a fundraiser for the state’s Democratic senator, Jack Reed.

Podesta and a small team of campaign aides, meanwhile, slipped out of their Brooklyn headquarters in a freight elevator and flew to Rhode Island aboard a private plane to meet Kaine. When they arrived in Newport, they waited in their car in a beachfront parking lot — Podesta was wearing a suit and didn’t want to draw suspicion.

The offer finally came in a 7:32 p.m. EDT phone call from Clinton, who was in a holding room after wrapping up a rally at the Florida state fairgrounds in Tampa. Kaine took the call in a shipyard office in Newport strewn with rope and boating equipment, and he quickly accepted.

During the call, Clinton joked to her future running mate that Podesta was “outside hiding” and ready to brief him.

Kaine told Clinton, according to aides: “This is going to be the beginning of a beautiful relationship and we’re going to have a lot of fun out there.”

While Clinton called Obama at the White House to inform him of her decision, Kaine’s aides saw a large clutch of reporters outside and tried to figure out how to leave without attracting attention. They considered departing on a boat but instead switched cars, piling into a Volvo, and drove to Newport’s Viking Hotel, where Kaine’s wife had already checked in.

When he arrived, Kaine told his wife in person that he was joining the Democratic ticket, aides said, and then conferred with Podesta and the Clinton aides over dinner and began working on his debut speech.

The senator took a congratulatory call from Obama on the way to the airport and the group took off for Miami around 11:15 p.m. EDT.

The Clinton aide said she ultimately concluded that Kaine met her top consideration — the ability to step in as president if necessary— and she had reached a comfort level with the low-key lawmaker that made her believe he could be a “true partner in governing.”

Clinton and Kaine spent Saturday morning in conversation at a Miami Beach hotel and then travelled to their first rally together at Florida International University. Taking the stage to Marvin Gaye and Tammi Terrell’s “Ain’t No Mountain High Enough,” a beaming Clinton linked hands with Kaine and promised next week’s convention would be about “building bridges, not walls.”

“My running mate is a man who doesn’t just share those values,” Clinton said of Kaine. “He lives them.”