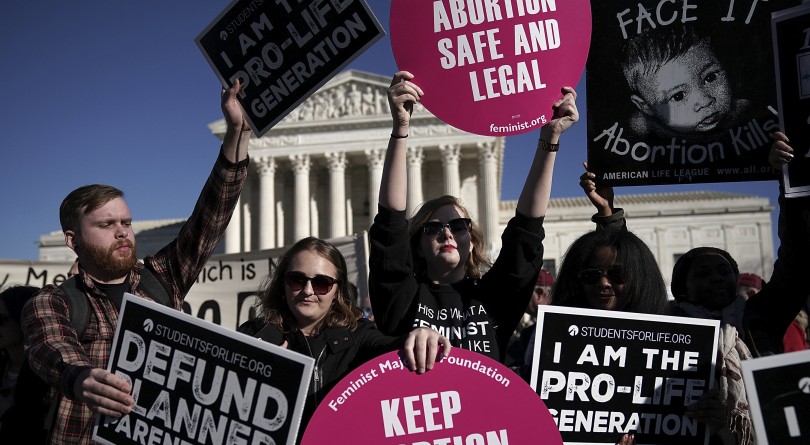 Anti-abortion activists try to block the signs of abortion-rights activists in front of the the U.S. Supreme Court during the 2018 March for Life on Jan. 19, 2018, in Washington, DC. (Alex Wong/Getty Images)

One of the bestselling novelists in the United States is a woman on a mission. Jodi Picoult, like millions of her fellow Americans, has some very strong opinions on the issues currently roiling a nation that often seems to be engaged in a (mostly) non-violent civil war, but the author of 24 novels has a platform any politician would envy. Ever since her 14th novel, Nineteen Minutes—which explored events surrounding a school shooting—was published in 2007, Picoult’s books have reached No. 1 on the New York Times bestseller list.

Whether her themes involve mass violence or, as in 2016’s Small Great Things, systemic racism, it is precisely the controversial nature of her material that draws the author to it. “Anything that’s got me up at night wondering what would happen to me in that situation, or what if I believed something different,” Picoult tells Maclean’s. “If I keep worrying about it, it’s a good idea for a book, because the things I worry about are probably the same things other people worry about.”

Perhaps so, but a common passion does not mean shared opinions. Despite that, Picoult’s compulsion to tackle controversial subjects has not hurt her sales. On the contrary, in a country where broadly popular cultural figures have traditionally stayed that way by avoiding the rawly divisive, Picoult’s risk-taking and readership have grown in tandem. Small Great Things, a story of a black neonatal nurse and the baby of white-supremacist parents—soon to be a film starring Viola Davis and Julia Roberts—was her most popular novel yet. Picoult, a 52-year-old married mother of three who has implicit faith in her mostly female readers and her ability to connect with them, is gratified but not surprised by the response. “It can be hard to believe if you are on Twitter,” she says, “but there is a way to have respectful conversations in my ridiculously polarized country,” and that’s by being scrupulously fair to all sides of an issue.

Picoult has to hope the formula still works when her newest novel, out in October, pushes what is arguably the hottest button in America’s culture wars. A Spark of Light opens in a Mississippi abortion clinic, where a gunman has killed several staff and patients and taken the rest hostage, including the teenaged daughter of the police negotiator. “It’s not my job as a writer to tell you what to think,” Picoult says. “My job is to get you to question what you think, and the way to do that is to make sure you hear what the other side has to say, maybe for the first time ever. That’s what I did for myself. In my research, I spoke to pro-life activists, I spoke to 151 women who had had abortions.”

She wants her readers to hear all their voices, particularly at this moment in American life. “Did I know when I started this book two and a half years ago that we would be on the verge of confirming Brett Kavanaugh to the Supreme Court? No. Then again, am I surprised? No. We’re living in a time when women’s stories do not count. When the women who say they’ve been abused are called liars, it is very hard to believe that women’s stories have any weight.”

Born on Long Island to a non-observant Jewish family and based in New Hampshire, Picoult—who proudly identifies as progressive and pro-choice—knows she is not a natural fit in large swathes of her country.

Enter the storytelling. For two centuries, novels—from Uncle Tom’s Cabin through the works of Dickens, Zola, Steinbeck and more—have played an enormous role in Western society’s steady liberalization through their ability to put a reader inside another human’s skin. Picoult writes well, with flair and nuance, but her real gifts, unsurprisingly, are the two that propel writers up bestseller lists: driving narrative and relatable characters. Asked if her characters, more than any notion of balance, make the difference, Picoult demurs only slightly. “That’s the catch that holds, but the real magic of a novel is that nobody is going to pick up a non-fiction treatise on abortion. That challenges our beliefs, which we want validated. The beauty of fiction is that you’re reading it for entertainment. But if I’m doing my job right, you’re learning a lot along the way from this fake character in this fake situation. And when you close that last page, you’re still thinking about a topic you might otherwise have never addressed.”

And how is that working out this time? Picoult’s preliminary verdict on A Spark of Light, based on early readers’ responses, is so far, so good. In September, she was invited on the podcast hosted by Jen Hatmaker, whom Picoult describes as “a very prominent evangelical tastemaker in Texas, with a huge following.” After much discussion and some hesitation, the author accepted. “Jen did ask me a question about the book [and the characters], and I went into a 20-minute diatribe about abortion rights. And it was well within her power to cut those 20 minutes, but she didn’t, she left them in. After the podcast came out, my social media was flooded by people who listened—her followers—saying how they couldn’t stop listening, how it really made them think. That’s all I want! Just listen.”