How liberal democrats can save America, slowly but surely, from Trump 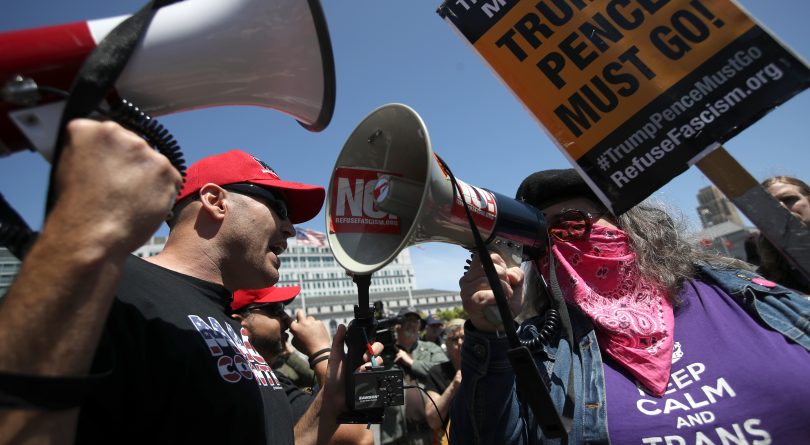 Far right activists square off with anti-fascist protesters during a freedom of speech rally in front of City Hall on May 03, 2019, in San Francisco. (Justin Sullivan/Getty Images)

As it did for many of his political persuasion, the election of Donald Trump as American president seemed more than a mere lost vote to Adam Gopnik. For the Montreal-raised author and New Yorker staff writer, the triumph of Trump felt like the opening moment of an assault on liberal democracy itself, especially its core principle of pluralism. As for liberalism, his own political credo, Gopnik found it everywhere under attack and nowhere unapologetically defended, so he decided to fill that gap. A Thousand Small Sanities: The Moral Adventure of Liberalism offers a robust defence of liberal thought, institutions and achievements, while neatly capturing, in Gopnik’s fine epigrammatic style, what its enemies think of it. Both right- and left-wing polemics despise liberals as spineless centrists who, in the author’s words, put “band-aids on plague sores.” There is a kernel of truth in that caricature of incremental reform, argues Gopnik, but even that kernel is part of liberalism’s true strength.

Q: You do try to avoid contemporary politics as much as possible, but what do you, as a liberal, think of the question that is roiling the anti-Trump opposition: should it cleave to the centre or move to the left?

A: That decision is a false choice. You can be in favour of what are conventionally called left policies while still accepting that pluralism demands incrementalism, that you’re not going to be able to get policies like Canadian-style health care by decree or by a sudden onset of mass enthusiasm. Those are only going to be possible in the liberal manner—one by one over time. So my answer is that you have to be radicals of the real, you have to be simultaneously radical and realistic.

Q: Your book exposes a liberal fear that its enemies have it on the run, that the right is piling up political victories while the left has cultural wins—the former, as you put it, stacking federal courts with diehard judges while the latter manages to ban sombreros from campus parties.

A: The discrepancy between cultural and political victories has only become more acute since Trump came to power. I think that’s not a good way to confront Trump. No politics of excommunication has ever worked successfully—real politics are inclusive or they’re not anything. I fear that moving in identitarian directions is dangerous. I do recognize that someone like Joe Biden obviously represents in the eyes of many of my kids’ generation an exhausted centrist alternative to the right. And that’s the crisis that I think liberals and the left are in right now in America.

Q: Perhaps a generational crisis too. It can be hard to get by the fact that a quartet of leading 2020 presidential contenders—Biden, Elizabeth Warren, Bernie Sanders, Trump himself—are collectively pushing 300 years old.

A: I’m working on a long piece for the New Yorker about aging and I was talking to an expert at MIT about our profound societal prejudice against older people—in everything but politics. It’s the strangest thing. But the MIT guy said, remember your voters. The people who actually go to the polls tilt old. We tend to forget that the Democratic voters considering Biden are middle-aged-plus.

Q: There is a lot of Canadian content in your book. Probably the most germane is the compromise between individual and group rights, a struggle that is at the heart of the left-liberal divide in the U.S., especially when it comes to hate speech.

A: Absolutely. There is a lot of Canadian content. It comes instantly to mind when you’re trying to make the point liberalism in its formative stages was all about making nations out of warring peoples. You can’t find a better instance than LaFontaine and Baldwin standing shoulder to shoulder against an anti-Catholic mob in Montreal. That’s really the primal Canadian scene, where we started. In the other major Canadian section, where I quote Justice Rosalie Abella, I wanted to make the case to Americans that it is perfectly possible to be a committed civil libertarian and still ask questions about the permissibility of hate speech. So, yeah, Canada. You know, whenever I praise Canada in Canada as a kind of model liberal nation that shows how to turn coexistence into the principle of pluralism, Canadians hate it. They react like someone being praised for having such a happy middle-class marriage. Even if it’s true, nobody wanted to hear they have a happy middle-class marriage, rather than a great illicit romance.

Q: So, the Canadian content, then, is all about compromise, the most despised word in contemporary American politics?

A: For me, compromise is a fighting word. It’s not a retreat from the edge of actual accomplishment, but a way of carrying on the fight for pluralistic values, for cosmopolitanism, for coexistence, for diversity in the best sense. There’s simply no greater instance of diversity as a positive creative generative thing than growing up in Montreal in the ’60s and ’70s. Every morning the bus went by the Notre-Dame-de-Grâce Kosher Delicatessen, and nobody thought that was remotely peculiar or contradictory. It was a reflection of the reality of Montreal life, which I think is still largely true despite all of the changes since then. I think the story that was the political spine of my growing up—how Quebec nationalism asserted itself, almost split the country, failed to, then receded, and now seems to have found countless ways of making itself felt without making itself self-destructive—is an amazing story of what liberalism can accomplish in the political sense. I’m immensely proud to have come from that.

RELATED: Steven Pinker: The world is getting better, not worse. Seriously.

Q: And that didn’t have to happen. You write a lot, quite rightly, about the fragility of liberal institutions, from public schools and peaceful protest to courts and legislatures, and the damage that can be done to them.

A: You’ve just described the entirety of my message. These traditions and institutions are not accidental. They weren’t the byproduct of bourgeois economics. They are unique in human history and they are insanely fragile and now they’re under assault from left and right. I grow particularly frustrated with my friends on the left, with whom I share many values and most programs, who treat those institutions impatiently and act as though anyone who is primarily interested in defending them is a reactionary. Not to recognize how fragile those institutions are and how incredibly hard they were to create and sustain seems to me a blind spot with a tragic dimension. That’s why I wrote about [anarchist philosopher and activist] Emma Goldman. She fascinates me. She ended her life—admirable in so many ways, hugely audacious and morally adventurous—in Canada. But she didn’t seem to ever quite understand that the reason she was free to talk and lecture about Eugene O’Neill and her experiences of Bolshevism and the necessity of anarchism in Winnipeg was because Winnipeg had certain institutions that enabled that to happen. It wasn’t just because people in Winnipeg are nice. It was because local institutions had been planted and nurtured and sustained. That’s the whole message of my book.

Q: You pay close attention to what is probably liberalism’s weakest flank, the accusation that it is the philosophy of rootless, cosmopolitan elitists dismissive of their home and native lands.

A: I do think we’re suffering from a patriotic deficit. The distinction between nationalism and patriotism seems to me essential and I try to define it. De Gaulle, for instance, was a great patriot without being a nationalist in the same way that Hitler or any number of other people were and are. But the liberal imagination hasn’t done a very good job of that lately. Talking about Canadians, the philosopher Charles Taylor offers a moving account of how the question, “What do I want?” is shallow in meaning compared to the question, “Where am I?”

Q: Didn’t that become a significant factor in several high-profile races in the midterms where the Democrats fielded candidates with solid patriotic credentials?

A: My son Luke worked on what I think was a very important congressional campaign in New York. Now Alexandria Ocasio-Cortez, AOC as she’s known, got enormous attention for winning in a Brooklyn district that was deep blue. Luke worked on a campaign for a Democrat named Max Rose in Staten Island, which is the one deeply, deeply conservative New York area. It’s a combination of white, working-class voters and mafia dons in big houses—the Tony Soprano vote. It had been Republican for as long as anyone could remember, and the previous Democrat lost by 40 points in 2016, but they turned it around. Rose won. That’s a much bigger event than AOC’s victory because it was a deep red area turned blue. It turned out to be hugely important that Rose was an army veteran who could put patriotism and progressivism together in a way that was persuasive to the Tony Soprano vote. I think that is a much more fruitful model of the direction that liberal politics can take in the U.S. than thinking we can actually progress by hiving off into ever smaller cells of like-minded identitarians.

Q: What can you put your faith in these days?

A: That liberalism rises from the ground up. Most often—gay marriage is the perfect example—by the time an issue becomes a political movement it’s essentially to ratify a change that’s already happened in the world. Politics follow manners and mores much more often than the other way around. But I don’t mean to sound fatuous about any of this. We all have the philosophy of our insomnia and at 3 a.m. most nights I fear that we’re headed in an awful, horrible direction in the States and also abroad. Whatever this anti-pluralism political toxin is, it’s epidemic now. You can see Trump get more and more obviously deranged with every passing day. And the conservative party around him, the Republican Party, coalesces around him more and more tightly as he becomes crazier. That’s what typically happens when right-wing authoritarians come into power. I have no blithe certainty that this is all going to work out or even entirely think that it will. But that doesn’t change the values that I want to teach my kids.