How long can Trump's love affair with Republican voters last?

The president’s approval ratings are low, but American Republicans still love him. Why? Because they also want to love themselves. 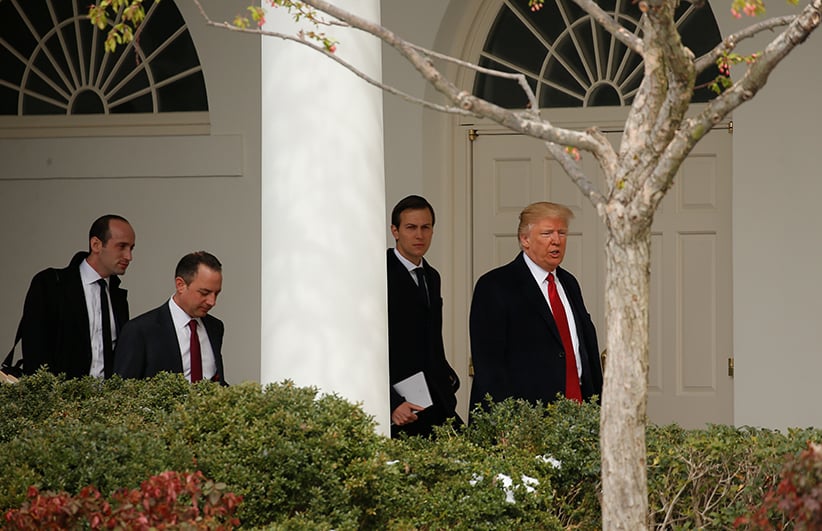 If the 2020 presidential election were held today, Donald Trump’s approval rating indicates he’d lose to the piece of gum stuck on the sole of your shoe. According to Gallup, the president’s most recent weekly rating is 40 per cent. His average to date is 42 per cent.

Those numbers are low both in absolute and relative terms. Historically, U.S. presidents have averaged 53 per cent approval and 63 per cent during their first quarter in office–that is, during their respective honeymoon periods. After the election in November, Trump enjoyed no such blissful and romantic stretch with the American public. His approval numbers started low and never recovered. The marriage started in counselling and quickly went downhill from there.

READ MORE: Party or country? The Republicans choose a side.

At least that’s the way things look when you focus on the general public. A quick glance at Trump’s approval ratings filtered by party identification tells another story. Among those who identify as Republicans, 86 per cent think Trump is doing a good job as president. Indeed, Republican support for the president hasn’t dipped below 86 per cent since Trump took the oath of office, and it has risen as high as 89 per cent. Democratic approval, however, started at 13 per cent, dipped to seven per cent in February, and currently sits at 10 percent. For independents, the numbers range from the low 40s to the mid-30s.

In the United States, political partisanship is a strong force. Indeed, it’s often an identity for voters who don’t just vote for Republicans or Democrats but are Republicans or Democrats. The distinction is important. While the former is something you do towards some particular end—for instance, electing a member of Congress or the president—the latter is something you live day-to-day. It plays a role in defining you as a human being.

In fact, partisanship doesn’t just define some folks, it also shapes their reality. Research has taught us that some partisans view the world through a lens that is shaped by their partisanship, except rather than making things clearer, that lens distorts their perceptions. Scholars Geoffrey Evans and Mark Pickup argue that a person’s perception of how the economy is doing is affected by their political preferences. In their study of the 2000-2004 presidential election cycle, Evans and Pickup found that those who disapproved of or disliked the president saw the economy as doing more poorly than those who approved of or liked him. As they put it, “Individuals’ economic perceptions are influenced by their political preferences rather than vice versa.”

RELATED: Is the Republican party about to implode?

Our interpretations and understanding of the world are conditioned by our commitments to the people, places, and things around us. Those who are deeply committed to a party probably want to feel good about themselves and about the party they support. They want to feel as if they are decent and competent people and that those they support and identify with are decent and competent, too.

Don’t we all? Most of us regularly do intellectual gymnastics in order to rationalize some attachment we have, to make it seem good or true or right or beautiful. Our romantic partner. Our friend. Our career. Our city. Ourselves. Why not our political party, too?

In their book Partisan Hearts and Minds, political scientists Donald Green, Bradley Palmquist, and Eric Schickler argue that partisan attachments are formed at a young age and tend to persist throughout our lives. They pick a side and stick to it. They latch on. They bite down. Like a dog with a bone—or an elephant or donkey with whatever elephants and donkeys latch on to or bite down on, if you prefer. Partisanship thus enjoys a quasi-religious status: it becomes taken for granted and sacred and fundamental.

What happens when the parties evolve? Well, partisans tend to change along with their party. They find ways to adjust while they go about their daily lives; they don’t ask too many questions and they rarely seriously consider abandoning their faith. They remain partisans. What does that mean for the U.S. and for Republicans under President Trump? At the very least, there’s a battle shaping up between the unstoppable force of Trump’s incompetence and unpopularity and the immovable object of partisanship.

In the world of politics, “political capital” refers to a politician’s ability to get things done by engaging the public or other politicians and mobilizing them towards their ends. It’s based in part on the ability of a politician to generate goodwill and to exert influence and is often referred to as a currency that is earned, saved, spent, or lost. The more of it a politician has, the better for his or her policy agenda.

In the United States, the president must work with Congress to enact much of his agenda—and that requires political capital. Lots of it. Since Trump’s numbers are so poopy, you might expect him to have a hard time mobilizing Congress. We’re seeing a bit of that struggle play out right now over the Republican plan to repeal Obama’s Affordable Care Act, which suggests that not only are Trump’s approval ratings low, but his political capital coffers might be depleted, too. The fact that 51 per cent of Americans think the Republican plan is not an improvement on Obamacare isn’t helping the president.

Despite die-hard Republican support, Trump is already in serious political trouble: a few months into his presidency, he’s already down to the felt at a time when most presidents are enjoying a post-election honeymoon period. Trump’s success as a president now hinges a great deal on whether or not more Republicans identify with him as leader rather than with the party beyond him. So far, Trump seems to enjoy an advantage here, with significant numbers of rank-and-file Republicans, including many who had opposed him during the primaries, backing him—reluctantly or otherwise. But that leaves him very little room for error since he can’t afford to bleed more support if he hopes to maintain the political capital needed to both push his agenda through Congress and keep an eye on his reelection chances in 2020. And if we’ve learned anything about the Trump presidency thus far, it’s that calling his administration “error prone” is like suggesting water is “wet prone.”

RELATED: How American democracy could slowly fade away?

One saving grace for the president might then be that with midterm congressional elections coming up in 2018, if he polls ahead of Republicans in Congress, he can bend them to his will with threats—as he is already trying to do. ‘Support me or lose your job’ might become a common phrase for Trump—we already know he quite likes to “fire” people—but whether it will have any effect remains to be seen. Republican partisans could turn on the president, especially if they start to identify with other Republicans who are resisting Trump’s agenda, or if his numbers somehow continue to decline.

How will Republican partisans act if their party descends into a civil war? It’s too early to predict what might happen in that scenario, but we may soon find out. Until then, it’s worth remembering that no love affair lasts forever except that between the author and his editor.