How many people will attend Donald Trump's inauguration?

The record for inauguration turnout was for Barack Obama's 2009 ceremony. Could Trump crack that? 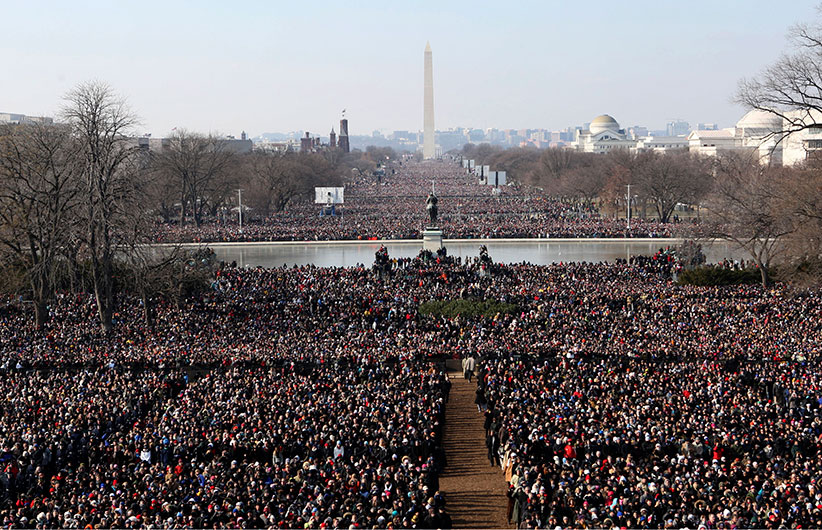 The National Mall is filled with guests and crowds during the inauguration of President Barack Obama as the 44th President of the United States of America in Washington on Jan. 20, 2009. (Scott Andrews/Reuters)

Depends on who you’re talking to. If you’re talking to Donald Trump or his surrogates, naturally enough, it’s going to be the biggest, best, classiest inauguration crowd ever, except for those overrated protesters. Trump himself told the New York Times: “We are going to have an unbelievable, perhaps record-setting turnout for the inauguration,” adding that “all the dress shops are sold out in Washington. It’s hard to find a great dress for this inauguration.” The fact-check industrial complex soon went to work on this and talked to people who run the stores where gowns are sold; they haven’t noticed any such shortage. Trump’s inauguration planning committee also told the Times that they expect to see a record-breaking crowd of up to three million people, but the Times added that according to the director of Homeland Security for Washington D.C., “his team had yet to see evidence that would cause it to revise its own estimates of 800,000 to 900,000 people.”

Team Trump would certainly be happy if their estimate turned out to be closer to the truth, since the record for inauguration turnout is held by Barack Obama’s first inauguration in 2009. Estimates had the crowd at a bit under two million. But that was a crowd that turned out to see the world-historic inauguration of the first black president, and Obama was a personally popular figure. Trump is coming in as a controversial winner whose standing in popularity polls is low by the usual standards of a new first-term president. That dampened enthusiasm might cause turnout to lag behind Obama’s 2009 showing; the 2001 inauguration of George W. Bush, the last president to get fewer votes than his opponent, drew 300,000 people. If the predictions of up to 900,000 people are right, that would actually be very good by those standards—but it wouldn’t beat Obama. And since Trump doesn’t even believe he lost the popular vote fairly, he’s unlikely to agree with any low-ball estimates of the crowd on Jan. 20. Although that is if the estimates are low—remember, though experts are predicting a less than record-shattering crowd, Trump-related predictions have been wrong before.