How small donations became the new currency of U.S. politics 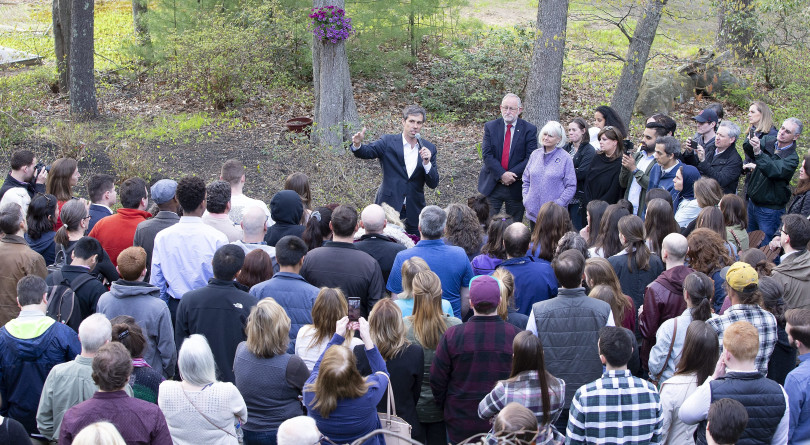 In the midst of this volatile political moment, one of the most interesting subplots is how Bernie Sanders has rewired conventional thinking to campaign financing—and what that could mean for the future of U.S politics.

During the 2016 Democratic primary, the Vermont senator’s insurgent bid for the nomination was powered by donations that averaged $27, and the vastness of his online donor network was the stand-out feature of his campaign.

Three years on, Sanders is but one of 22 candidates in a scramble for the Democratic nomination, and most polls have him running a distant second to Joe Biden. But even if he loses, the unconventional campaign infrastructure he pioneered in 2016 has become a key measure of candidates’ electoral viability in the current race.

For 2020 presidential hopefuls, the scale of online contributions is now a litmus test of grassroots credibility—one that is forcing candidates to strike a delicate balance between preserving their appeal among middle and working voters and courting wealthy financial backers. More importantly, the ability to woo small donors is being read as a sign that candidates have the level of populist appeal necessary to take on Donald Trump, whose campaign has been raising unprecedented amounts of money—much of it in small contributions.

RELATED: Beto on the borderline

Sanders, not surprisingly, is once again leading the Democratic field of two dozen candidates. According to the latest figures, he raised more than $20 million in the first quarter of 2019, with 74 per cent coming from small donors who gave a total of $200 or less.

But he’s no longer the only one. As the Democratic party’s presidential candidates embrace Sanders’ anti-establishment politics, disavowing wealthy backers, they are increasingly turning to digital fundraising vehicles.

The mayor of South Bend, Ind., Pete Buttigieg, and former Rep. Beto O’Rourke both have received more than 60 per cent of their overall contributions from small donors. Meanwhile, Massachusetts Sen. Elizabeth Warren’s campaign noted the candidate received 213,000 donations with an average contribution of $28. Democratic presidential candidate and entrepreneur Andrew Yang has a significant amount of small donor support—$1.4 million, or 81 per cent, of the money he has raised in the first quarter.

“Since 2004, there’s been a steady build of Democratic campaigns getting better and better at being able to grow large grassroots fundraising programs, specifically online,” says Gregory Berlin, who is a partner at the digital consulting firm Mothership Strategies, a prominent Democratic digital firm.

“It’s been a slow and steady growth of online donors and folks willing to get online and bring more folks into the system, from [former presidential hopeful] Howard Dean and Barack Obama to Trump—and Bernie too obviously.”

It’s an emerging pattern that has amplified a discernible divide within the Democratic party between those embracing the small-donor revolution and those sticking with traditional methods.

In addition to former vice-president Joe Biden, moderate senators such as Cory Booker, Amy Klobuchar and Kirsten Gillibrand have not abandoned the traditional way to raise money. Sen. Kamala Harris’s $12 million puts her in second place in fundraising, yet the bulk of her support came from big donors.

It’s an orientation that, under the current anti-establishment climate, carries risk. Trump has peculiar talent when it comes to tarring opponents like Jeb Bush and Hillary Clinton as puppets of established interests; reliance on big donors would give him ammunition.

No surprise, then, that the Democratic National Committee has established a minimum grassroots fundraising threshold for televised debates. The new model is designed to demonstrate the candidate’s grassroots strength by requiring candidates to have 65,000 donors, with at least 200 contributors in each of 20 states.

The short-term goal might be beating Trump, but for activists like Patrick Burgwinkle of End Citizens United, the long-run hope is to turn around America’s drift toward big-money, pay-to-play politics. “I think in 2020 you’re seeing a lot of the Democratic candidates for president really prioritize reforming our system,” says Burgwinkle, communications director of the grassroots political action committee focused on campaign finance reform. A majority, he notes, have said they are not going to accept corporate political action committee money: “What you’re saying to voters is that I’m going work for you when I’m president not for corporate special interest.”

The result, Burgwinkle adds, can be a healthy co-dependence between candidate and donors that lasts an election cycle and beyond. “The more people you’re able to bring into your campaign as small-dollar donors, those are the people who you can turn into voters, you can turn into volunteers, and you can also return to time and time again to ask them to give $5, $10 even $1 over the course of your campaign.”

The ascendance of small-dollar contributions is coming as some Democrat politicians are themselves ramping up efforts to curb the outsize influence of big money.

Overhauling the campaign finance system was an animating issue in the 2018 midterm elections. A slew of candidates, most notably Alexandria Ocasio-Cortez, who became the youngest woman ever elected to Congress, pledged not to accept corporate PAC donations—a rejection that seemed to capture the appetite among voters for disruption.

A 2018 survey, conducted by the U.S. based Pew Research Centre, suggested most Americans see the country falling well short in living up to its democratic ideals, and the “design and structure” of government needs fundamental changes. Some 77 per cent of respondents said they support limiting the amount of money individuals and organizations can spend in political campaigns, while 65 per cent said they believe new laws are necessary to reduce the influence of money in politics.

The explosion of small-dollar donations may have already shifted political debate, opening space for ideas that were unpalatable just three years ago. Ocasio-Cortez’s Green New Deal, Bernie Sanders’ Medicare-for-All (now supported by the large chunk of the electorate), slashing tuition for higher education and $15 minimum wage are all now part of the mainstream conversation. And with change comes uncertainty. As Rolling Stone’s Matt Taibbi puts it: “Heading into 2020, it’s clear neither the press nor the Democratic Party leadership has any idea what electability means on any level anymore.”

Kenneth Cosgrove, an associate professor of government at Suffolk University in Boston, agrees that the digital and small-dollar model “has changed the idea of viability.” But to work for the Democratic nominee, it must do more than show a candidate’s fundraising machinery is up to date, he says.

“As a serious candidate, what is the place you want to put yourself in the mind of the voter?” he asks. “And how is that different from your opponents? Because that’s the thing Trump really figured out in 2016.”