How tiny details tell the bigger story of a surreal inauguration 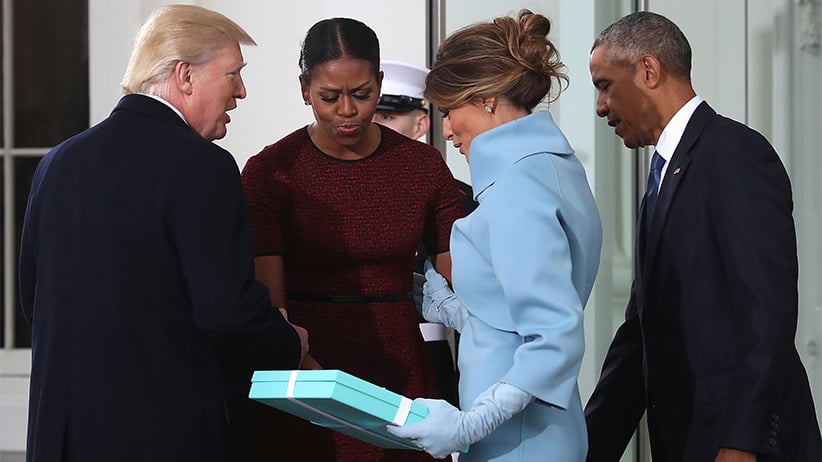 Small, telling details of unintended consequence punctuated the much-vaunted peaceful transition of American democracy from one president to the next on Friday—moments of much-needed civility bristled with discontent just beneath the surface. The first was evident early when the Trumps arrived at the White House to meet with the Obamas over coffee, per Inaugural Day tradition. Melania Trump, attired in a pale blue, form-fitting coat and gloves that appeared to channel the memory of Jackie Kennedy, carried a gift: a trademark Tiffany-blue box wrapped with a bow. It was, by all appearances, a gracious gesture. Yet arriving with a present for people leaving the property also could be read as a “house-cooling” present.

The move also reflected Donald Trump’s commercial instincts: the famed jewellery store has its flagship (and now security-barricaded) location in New York’s Trump Tower; the merchant also inspired the name of his second daughter. Receiving the gift, Michelle Obama betrayed a side eye that became her signature gesture during the day. When the two couples posed for the press outside the White House, the blue box became a comical inconvenience. Finally, the President of the United States was forced to return to the White House to hand it off to a minion. 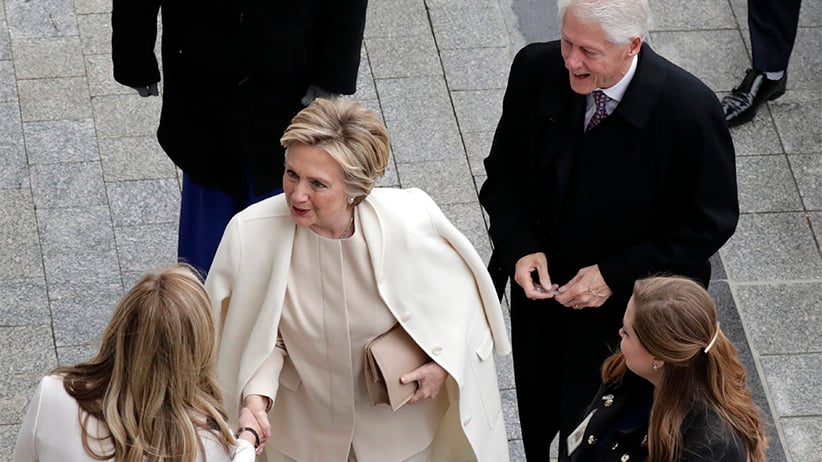 Former US President Bill Clinton and former Secretary of State Hillary Clinton arrive near the east front steps of the Capitol Building before President-elect Donald Trump is sworn in at the 58th Presidential Inauguration on Capitol Hill in Washington, D.C. on January 20, 2017. (John Angelillo/AFP/Getty Images)

The next telling moment came with the much-anticipated arrival of Hillary and Bill Clinton to the Capitol. As they exited their car, Hillary Clinton was pelted with inane questioning from a CNN reporter: “How does it feel to be here today?” he asked. She remained silent, her head high. What the former secretary of state was thinking at that moment no one may ever know, yet the expression etched on her face was familiar to anyone who has attended a funeral. Hillary Clinton’s disgrace as an integral, celebrated aspect of Trump’s election continued to his swearing-in as the incoming president with the lowest approval rating in history, at 32 per cent.

On Friday, his supporters showed up on on the National Mall wearing T-shirts that read “The Witch is Dead” and “Donald Trumps Hillary.” On CNN, panelists also seemed to gloat, speaking about Obama and Trump travelling together to the inauguration: “Two men who denied her the presidency are travelling in one car,” said one.

The Clintons presented as a unified front. As they readied themselves to be announced and then walk down the steps to their seat, the former president took his wife’s hand, squeezing it several times. As they were introduced, the animated, political Hillary and Bill emerged. Hillary Clinton smiled, she pointed, she nodded. “We’re here for you,” one person shouted at her. Simultaneously, her Twitter account spoke for her: “I’m here today to honor our democracy & its enduring values. I will never stop believing in our country & its future. #Inauguration.”

As she did during significant moments of her campaign, Clinton wore white, a hue associated with the suffrage movement; it also provided a foreshadowing of the women’s march that would take place tomorrow on the same site. Yet white would prove an ambitious fashion shade: Ivanka Trump and Tiffany Trump were also boasting it, as was Jill Biden. 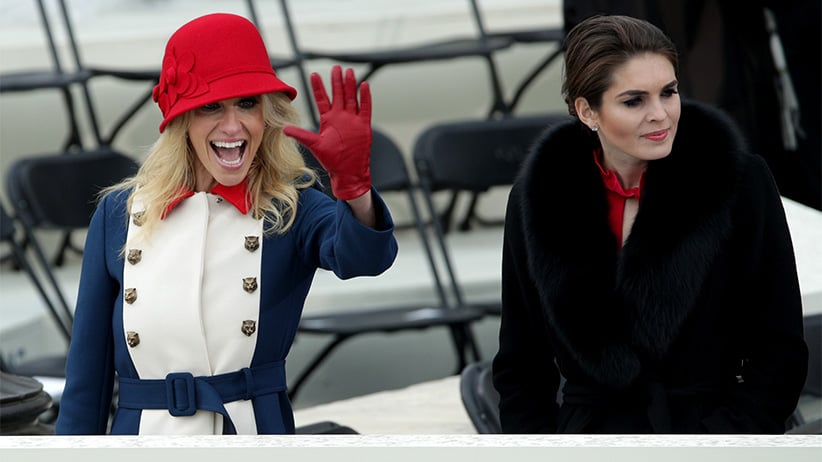 In stark relief, there was Trump spokeswoman Kellyanne Conway’s red-white-and-blue Gucci get-up. There’s no doubt she wanted her outfit, which reportedly retails for $3,600, to reinforce the blunt, patriotic messaging of Trump’s inaugural address; she referred to it, with an apparent lack of irony, as “Trump Revolutionary Wear.” Yet the cartoonish, militaristic apparel couldn’t help but summon another association less flattering to her boss: to the costumes worn in Hamilton, whose actor Brandon Victor Dixon famously asked now-Vice-President Mike Pence to value diversity and “to work on behalf of all of us.”

The pledge to work for struggling Americans was one Trump himself made: “This moment is your moment; it belongs to you,” he told the crowd. Yet the presence of gaming billionaire Sheldon Adelson and his wife, Miriam, major Trump campaign donors, given privileged seats on the dais, suggested other allegiances at play. Trump’s address was an elevated version of his campaign stump speech—minus the attacks on Clinton, which shortened it considerably.

It was a speech absent of nuance, befitting the first inauguration in more than half a century that saw no poetry read. The new President chose not to avail himself of the wisdom or soaring sentiments of other statesmen or artists, again breaking with tradition. In fact, he uttered a disregard for the past: “Now we are looking only to the future,” he instructed the nation. (That said, the new White House Twitter account briefly paid homage to the past by using a photo from Obama’s packed 2009 inauguration as its banner.)

Trump’s speech forged a new American imagery of blood and steel and “America first.” He spoke in code in places—of ending “American carnage,” and identified American citizens as being “infused with the breath of life by the same Almighty Creator.” At the end, Obama congratulated him. “Good job,” he said, a graceful lie in a day that called for many.