How U.S. presidents fail in their mass shooting responses

When Americans are gunned down, presidential rhetoric is demanded. But even when it's moving (Obama) or spiritual (Trump), does it matter? 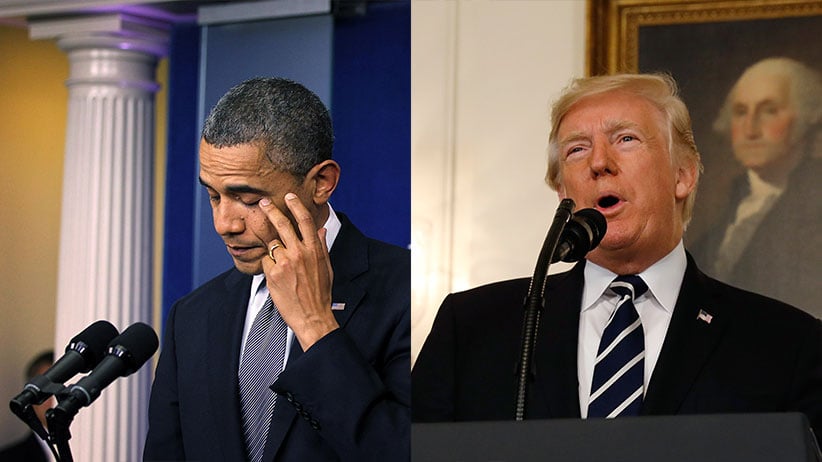 Maybe even Donald Trump, with time, will get better at giving speeches after mass shootings. If recent American history is any guide, the president will get lots of practice. But his attempt following the slaughter in Las Vegas was not a promising first try at this most dispiriting modern sub-genre of the U.S. presidential address.

After Sandy Hook, Obama took parenthood as his theme. “We’ve endured too many of these tragedies in the past few years, and each time I learn the news I react not as a president, but as anybody else would—as a parent,” he said at the outset of that speech. “I know there’s not a parent in America who doesn’t feel the same overwhelming grief that I do.”

After Las Vegas, Trump opted to start his speech with what amounted to a summary of the news: “Last night a gunman opened fire on a large crowd at a country music concert in Las Vegas, Nevada.” Did he think Americans hadn’t heard? Then he lurched from the ploddingly factual to the numbingly abstract: “It was an act of pure evil.”

Having established parenthood as his through line, Obama dropped an almost too gentle plea for a real policy response into his Sandy Hook reaction. “Whether it’s an elementary school in Newtown, or a shopping mall in Oregon, or a temple in Wisconsin, or a movie theatre in Aurora, or a street corner in Chicago—these neighbourhoods are our neighbourhoods, and these children are our children,” he said. “And we’re going to have to come together and take meaningful action to prevent more tragedies like this, regardless of the politics.”

He meant gun control, of course, but talking explicitly about that when the news of 20 little children and six school staff members dead hadn’t yet sunk in would have been greeted in America as too political, too soon.

Trump didn’t bother hinting at any worldly action at all—certainly not gun control—after Las Vegas. His rhetoric was floridly churchy. “Scripture teaches us the Lord is close to the broken hearted, and saves those who are crushed in spirit,” he said. “We seek comfort in those words, for we know that God lives in the hearts of those who grieve.”

It’s hard to imagine even Trump’s fans buying him as a spiritual leader. But any American president, even this one, is looked to at these awful moments to summon the country’s instinct to unite. Even at this, though, Trump couldn’t quite get it right. “We pray for the entire nation to find unity and peace, and we pray for the day when evil is banished and the innocent are safe from hatred and from fear,” he said. The day when evil is banished? How about the day when assault weapons are banned?

Obama’s framing of the requisite request for Americans to come together was, naturally, more affecting. “This evening, Michelle and I will do what I know every parent in America will do, which is hug our children a little tighter, and we’ll tell them that we love them, and we’ll remind each other how deeply we love one another,” he said. “But there are families in Connecticut who cannot do that tonight and they need all of us right now. In the hard days to come, that community needs us to be at our best as Americans, and I will do everything in my power as president to help.”

As it turned out, everything in Obama’s power as president wasn’t worth much when it came to gun control. The intransigence of Congress and the clout of the gun-rights lobby proved stronger. And, since that hasn’t changed, maybe it doesn’t matter that Trump’s words are so much weaker.