'I kind of miss Donald Trump.' Republicans debate minus frontrunner 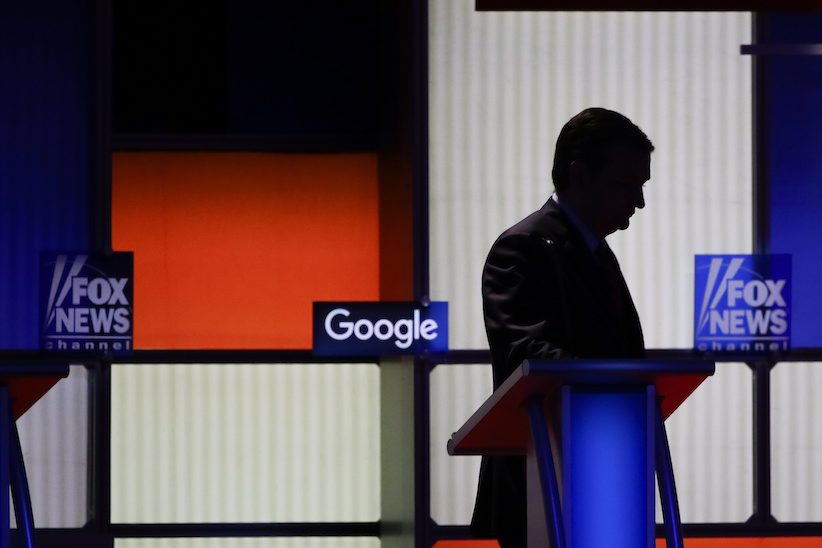 DES MOINES, Iowa — Absent Donald Trump, the Republican presidential candidates strained to take advantage of a rare opportunity to step out of the front-runner’s shadow in Thursday night’s debate — a staid, policy-heavy contest that offered a glimpse of what the GOP contest might have been without the unpredictable businessman.

Still, the candidates couldn’t resist mocking Trump, who boycotted the final debate before Iowa kicks off voting in the 2016 campaign on Monday.

“I’m a maniac and everyone on this stage is stupid, fat and ugly,” said Texas Sen. Ted Cruz, who is competing with Trump for the lead in Iowa. Cruz then thanked his fellow candidates for showing Iowa voters respect by showing up.

Former Florida Gov. Jeb Bush, a frequent target of Trump, said with a wry smile, “I kind of miss Donald Trump; he was a teddy bear to me.”

Never one to go quietly, Trump held a competing rally elsewhere in Des Moines, an event he said raised $6 million for military veterans.

Trump’s absence put the spotlight on Cruz, as well as on Florida Sen. Marco Rubio, who needs a strong showing in Iowa in order to stay in the top tier of candidates.

The two senators were confronted with video clips suggesting they had changed their positions on immigration, one of the most contentious issues among Republicans. While each insisted the other had flip-flopped, both denied they had switched their own views allowing some people in the U.S. illegally to stay.

Cruz accused Rubio of making a “politically advantageous” decision to support a 2013 Senate bill that included a pathway to citizenship, while the Florida senator said his rival was “willing to say or do anything to get votes.”

“This is the lie that Ted’s campaign is built on,” Rubio said. “That he’s the most conservative guy.”

In a rare standout debate moment for Bush, the former Florida governor sharply sided with Cruz in accusing Rubio of having “cut and run” on the Senate immigration bill.

“He cut and ran because it wasn’t popular with conservatives,” said Bush.

Cruz was put on the spot over his opposition to ethanol subsidies that support Iowa’s powerful corn industry _ a position that has long been considered politically untenable for presidential candidates in the state. The Texas senator cast his position as an effort to keep the government from picking economic winners and losers.

With their White House hopes on the line, the candidates worked hard to present themselves as best prepared to be commander in chief and take on terror threats.

Rubio struck an aggressive posture, pledging that as president he would go after terrorists “wherever they are. And if we capture them alive, they are going to Guantanamo.” Rubio also stood by his previous calls for shutting down mosques in the U.S if there were indications that the Muslim religious centres were being used to radicalize terrorists.

Kentucky Sen. Rand Paul — back on the main debate stage after being downgraded to an undercard event because of low poll numbers earlier this month — warned against closing down mosques. A proponent of a more isolationist foreign policy, Paul also raised concerns about the U.S. getting involved militarily in Syria, where the Islamic State group has a stronghold.

Related: Ted Cruz: Made in Canada

The candidates focused some of their most pointed attacks on Democratic front-runner Hillary Clinton.

“She is not qualified to be president of the United States,” New Jersey Gov. Chris Christie said.

Christie is part of a crowded field of more mainstream candidates who have struggled to break through in an election year where Trump, and increasingly Cruz, have tapped into voter anger with the political system. Party leaders have grown increasingly anxious for some of the more traditional candidates to step aside to allow one to rise up and challenge for the nomination.

Asked whether the crowded establishment lane was putting Trump in position to win, Bush said, “We’re just starting out. The first vote hasn’t been counted. Why don’t we let the process work?”

Bush also defended the flurry of critical advertisements his well-funded super PAC has launched against Rubio and other rivals.

Bush and Christie, along with Ohio Gov. John Kasich, are looking beyond Iowa and hoping New Hampshire’s Feb. 9 primary jumpstarts their campaigns. In an election where a lengthy political resume has been a liability, Kasich defended government’s ability to tackle big problems.

“We serve you,” Kasich said of government officials and voters. “You don’t serve us. We listen to you and then we act.”

Cruz proudly claimed he was “not the candidate of career politicians in Washington.” Retired neurosurgeon Ben Carson, who has a small but loyal base in Iowa, said that even though he hasn’t been in government, he’s made plenty of life-and-death decisions as a doctor.

“I don’t think you need to be a politician to tell the truth,” he said.

While Fox covered the debate, other cable channels aired portions of his rally at Drake University, likely pulling away at least some TV viewers.

Trump was joined by fellow candidates Mike Huckabee and Rick Santorum, who spoke briefly at the rally after appearing in an early undercard debate for low-polling candidates. Huckabee told the audience that he, Santorum and Trump are political competitors but “tonight we are colleagues” in supporting veterans.