If a century's worth of presidents were in a schoolyard fight, who would win?

Joe Biden and Donald Trump have traded childish barbs, as if in a schoolyard fight. The logical next step: A bracket that pits U.S. presidents against each other. Vote now 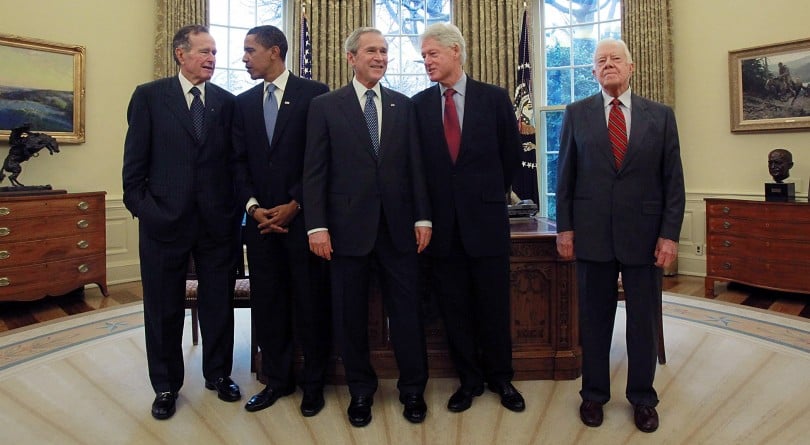 At a speech in Miami, former vice-president Joe Biden—a 75-year-old man—said that if he had a time machine, he’d thrash the president of the United States. “They asked me would I like to debate this gentleman, and I said no. I said, ‘If we were in high school, I’d take him behind the gym and beat the hell out of him.’ ”

Donald Trump—the 71-year-old President of the United States—responded, of course, with puerile insults. “He doesn’t know me, but he would go down fast and hard, crying all the way.”

So as two of America’s most prominent politicians drag the quality of political rhetoric to implausibly lower and lower depths, Maclean’s felt that we had to earnestly meet them halfway by trying to answer the question they’ve effectively raised: Which of the last 18 U.S. presidents would win in an old-fashioned, no-weapons, schoolyard scrap?

Here’s a short rundown of what each candidate has going for them, in the order in which we’ve seeded them. Note: we removed John F. Kennedy and Franklin D. Roosevelt from consideration due to physical concerns. Otherwise, this includes every U.S. president from Theodore Roosevelt onward, considering the entire breadth of each president’s life, with added focus on their respective presidencies. Then play out our bracket here and share who your champ is with the hashtag #POTUSPunchOut.

1. Theodore Roosevelt: A passionate outdoorsman, hunter, martial artist, and conquerer of natural challenges like the San Juan Hill, Teddy Roosevelt’s top seed is well earned. In fact, when he was shot in an assassination attempt in 1912, he continued to deliver his 90-minute speech before eventually going to the hospital, saying, “I give you my word, I do not care a rap about being shot; not a rap.”

2. Lyndon B. Johnson: As revealed by Robert Caro’s epic biographical series, Johnson was a giant in the legislative chambers who took no prisoners. Officially listed at 6-foot-3.5 inches, he is also literally the giant of this crop of presidents.

3. George W. Bush: Bush ran a marathon at the age of 43, and was able to run sub-seven-minute miles years later. But he’s not just all about athletic endurance—his accuracy allowed him to fire a strike from the mound at the first, emotionally heavy New York Yankees game after 9/11.

4. Barack Obama: An active basketball player during his two terms in office, could Obama’s lanky hook shot help him when it comes to landing his left hook?

READ: 6 U.S. presidents and their unlikely ties to Canada

5. Gerald Ford: Never actually elected to the country’s top office, President Ford still impressively held together the seams of the executive office during arguably America’s lowest political point. He was also the star of the division-one Michigan Wolverines football program, and turned down offers from two NFL teams. But his athletic reputation took a hit when he infamously fell down a wet set of stairs as he exited Air Force One, prompting Saturday Night Live to parody him as a stumblebum.

6. George H.W. Bush: In high school, the senior Bush was the captain of the varsity baseball and soccer teams, and went on to play first base for Yale. He served in the U.S. Navy as a naval aviator, piloting aircraft and surviving four hours in an inflated raft when he was downed in the Second World War. He later served as CIA director, and at 85, gave skydiving a try. He’s tied for third in terms of presidential height, too.

7. Jimmy Carter: The Georgia Democrat’s heritage as a peanut farmer gives him underrated strength and discipline. And as a U.S. naval officer, Carter was once lowered, lightly protected, into a damaged nuclear reactor to be exposed to unthinkable levels of radiation. He also continues to assist with Habitat For Humanity’s homebuilding projects into his 90s, doing so after overcoming brain cancer.

8. Dwight Eisenhower: As a standout running back/linebacker at West Point, he went head-to-head with Jim Thorpe—an Olympic gold medal-winning running back who some had already dubbed the greatest athlete in the world. While Ike didn’t win that face-off, he did go on to a decorated military career—and while he never did see active combat, one shouldn’t underestimate the mind of a former supreme commander of the Allied forces for strategy, all the same.

9. Richard Nixon: He was never much, athletically—he played football when he was young but, as one former teammate said, he was seen as mere “cannon fodder”—but was certainly a tough-talking politician. Still, he earns his decent seeding because of one inescapable wild-card question: in an anything-goes scrap, what trick wouldn’t Nixon pull?

10. Bill Clinton: At 6-foot-2-inches, Bubba is a big man—clocking in as the third-tallest of the contenders. He played some basketball but is a more avid golfer, claiming that he hit a further drive than links legend Jack Nicklaus when the two played a friendly game.

READ: Looking up to leadership: Do you have to be tall to be U.S. president?

11. William Howard Taft: While all these presidents have been unquestionable political heavyweights, only one can truly be seen as a literal one. Clocking in at 314 pounds when he was in the White House, Taft’s bulk—not to mention his long career in public office—shows he can take a licking and keeping on ticking.

12. Ronald Reagan: The actor-turned-politician has played a number of on-camera sports heroes—most famously George “Gipper” Gipp—but doesn’t have a long history of on-field sports performances. He has been credited with saving 77 lives during the seven summers he worked as a lifeguard around the Rock River, but it’s unclear if that remarkable story is merely apocryphal.

13. Donald Trump: His bluster may mask a lack of ability when it comes to actual pugilism—he did, after all, skip out on military duty owing to “bone spurs”—and his disaffection for non-golf exercise is exceeded only by his consumption of fast food. But he is the second-tallest of this crop of presidents, and third-tallest all-time. And a licensed medical professional did say, for whatever it’s worth, that he’d be the “healthiest individual ever elected to the presidency.” So.

15. Herbert Hoover: A wealthy man who tried in vain to right the U.S. ship during the Great Depression, Hoover is not ideally suited to a scrap such as this. But hey—maybe he picked something up in his time working as a mining engineer in the arid heat of the Great Victoria Desert, and for what it’s worth, he was hardy as a child, allegedly nearly dying at the age of two, only to be resuscitated by an uncle.

16. Woodrow Wilson: A heavyweight in academic circles, he was the first sitting president to attend and throw out the first pitch at a World Series baseball game. But his health was delicate from a young age, and halfway through his second term, the Democrat suffered a stroke that left him mostly incapacitated.

Go here to play out our bracket and decide a winner.