Canada depends heavily on exports to the U.S., but Americans could face steeper tariff hikes in a post-NAFTA world 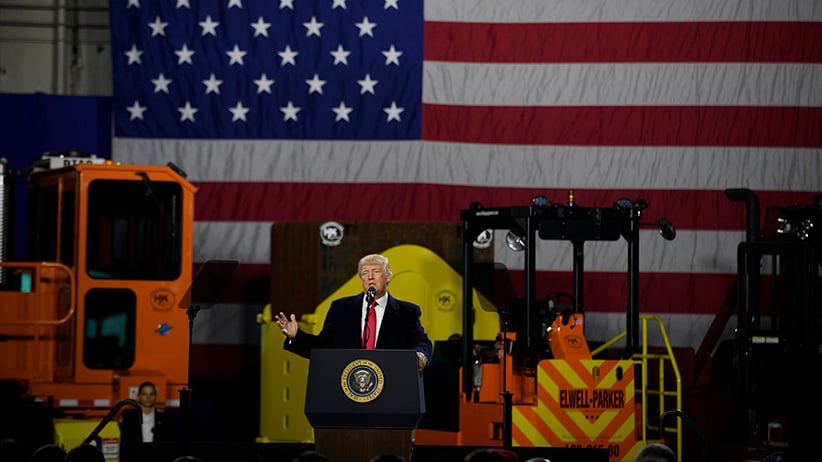 CORAOPOLIS, PA – JANUARY 18: President Donald Trump speaks to supporters at a rally at H&K Equipment, a rental and sales company for specialized material handling solutions on January 18, 2018 in Coraopolis, Pennsylvania. Trump visited the facility for a factory tour and to offer remarks to supporters and employees following the administration’s new tax plan. (Photo by Jeff Swensen/Getty Images)

Whatever Donald Trump decides to do about NAFTA, his instinct to trash the trade deal may end up hurting his own country’s businesses more than he realizes. The president has threatened to withdraw from NAFTA too many times to count, but also more recently struck a slightly more conciliatory tone on the future of the agreement. Pro-NAFTA voices, particularly from the farm lobby, are reportedly having an effect on Trump’s thinking. They’d be smart to tell him that American exporters have potentially more to lose than Canadians and Mexicans in a world without continental free trade.

Many Americans may assume that Canada and Mexico need NAFTA more than the U.S., but a deeper look at trade data suggests the truth isn’t so cut and dried. Brett House, the deputy chief economist at Scotiabank, and his colleague Juan Manuel Herrera, crunched the numbers on Canada’s non-fuel exports. Only about half of that trade capitalizes on NAFTA’s duty-free advantage. “This is one of those fun facts that is not well-digested by people in day-to-day life, in business, in policy circles,” says House. “We mustn’t overstate American leverage on NAFTA or indulge in catastrophizing about the sky being about to fall, because neither of those things are true.”

To be sure, Canadian exporters would feel pain if they faced new tariff barriers. In early January, when it was reported that Canadian officials believed Trump would indeed pull the U.S. out of NAFTA, markets fell immediately—and so did the loonie. A BMO analysis last November predicted a NAFTA termination would hit Canadian GDP to the tune of between 0.7 per cent and 1.0 per cent in real terms over five years. Companies that export goods, or transport parts back and forth across the border during production, would be disproportionately penalized. A Canadian Centre for Policy Alternatives report from July calculated that three per cent of companies would see tariffs jump from zero to 10 per cent. Meanwhile, Export Development Canada’s fall trade confidence index showed 23 per cent of exporters feel “negatively impacted” by NAFTA uncertainty—and are actively drafting contingency plans to diversify or restructure their business.

But many exporters simply don’t need a North American free-trade agreement to do business, thanks largely to the World Trade Organization’s most-favoured nation (MFN) tariff rates. Those rates, which apply to all 164 members of the WTO, have dropped significantly in North America since the WTO was first established. Canadian exporters who used to rely on NAFTA duty-free rates have relied less on those preferences almost in lock-step with falling MFN rates. 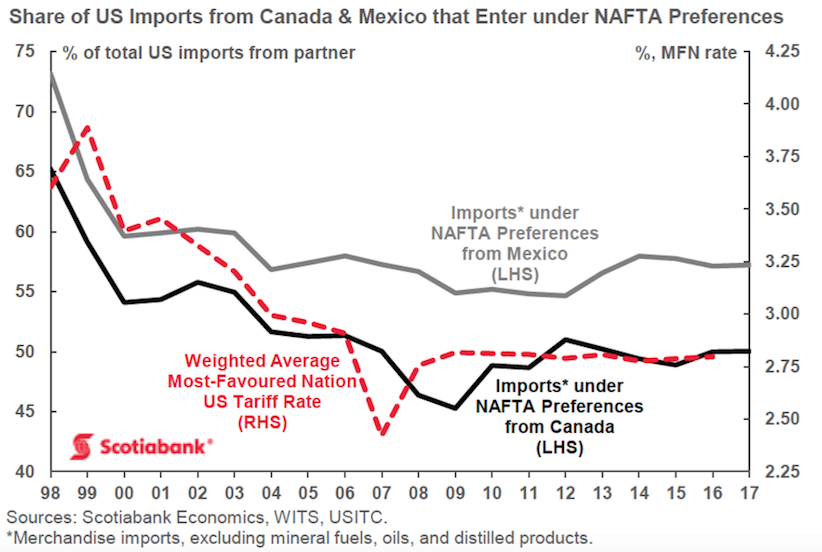 The CCPA report also pointed out that 41 per cent of Canadian exports enjoy MFN rates of zero. And those who do pay WTO tariffs face less paperwork to get products across the border than they would if they exported under NAFTA. The trade agreement requires a certificate of origin that forces companies to do complex calculations on how much of their products originated in North America, and then whether or not they meet rules of origin applied to the product’s tariff classification. That number-crunching is particularly tough for small companies whose products criss-cross borders several times in various stages of development. The smaller burden of red tape required for WTO rates, which still involves forms but nothing as complicated on rules of origin, can deliver real cost savings, says Mathew Wilson, a senior vice-president at Canadian Manufacturers and Exporters who helps advise Canadian NAFTA negotiators. “It could cost a company more to qualify a product and do all the paperwork to claim NAFTA then the one or two per cent they pay in [WTO] duties. So it’s just easier to pay the duties,” he says.

Wilson recently heard from a Canadian company setting up for a trade show across the border. In order to qualify for NAFTA rates, they had to fill out paperwork for everything they shipped over in advance of the show—including a used pencil. “It must have been about a three-page series of emails trying to figure out what the rule of origin is on a pencil,” says Wilson. “It’s so ridiculous the amount of bureaucracy we’ve put in place, that companies can’t be bothered.”

Because so many companies choose to avoid the red tape involved in qualifying for NAFTA, many on the Canadian side are less inclined to panic if NAFTA goes up in smoke. “A lot of exporters would just continue to do what they’re doing today,” says Wilson. “They’ll export, they’ll pay the minimal duty, and see that as a cost of doing business in the U.S.” That sense of business as usual extends to Canada’s energy sector, which accounted for 16 per cent of total U.S.-bound exports in 2016. MFN tariff rates on most energy and natural resources have dropped to zero, which gives Canada’s energy exporters an advantage—but nothing that hurts American industry, says House. “We are a stable, reliable supplier of huge quantities of energy and resources to the United States that power the American economy. We shouldn’t shy away from that,” he says. “This is one of the things that make Canada essential to the United States.”

Unlike the U.S., Canada and Mexico don’t track the proportion of imports that take advantage of NAFTA preferences. But analysis by Scotiabank’s House and Herrera suggests U.S. exporters would face disproportionately high tariffs compared to their neighbours in a post-NAFTA world. That’s because of the nature of what Americans are actually exporting. Seventy-six per cent of Canadian exports to the U.S., at current values, would face a MFN tariff of less than 2.5 per cent under WTO rules. But only 56 to 59 per cent of U.S. exports to Canada and Mexico would encounter the same low tariffs. As the chart below illustrates, Americans would also encounter a greater proportion of tariffs over five per cent—and 10 per cent—than either of its neighbours. (Trump has threatened to take on the global trading system, but disrupting American participation in the WTO would likely touch off a massive fight domestically.) 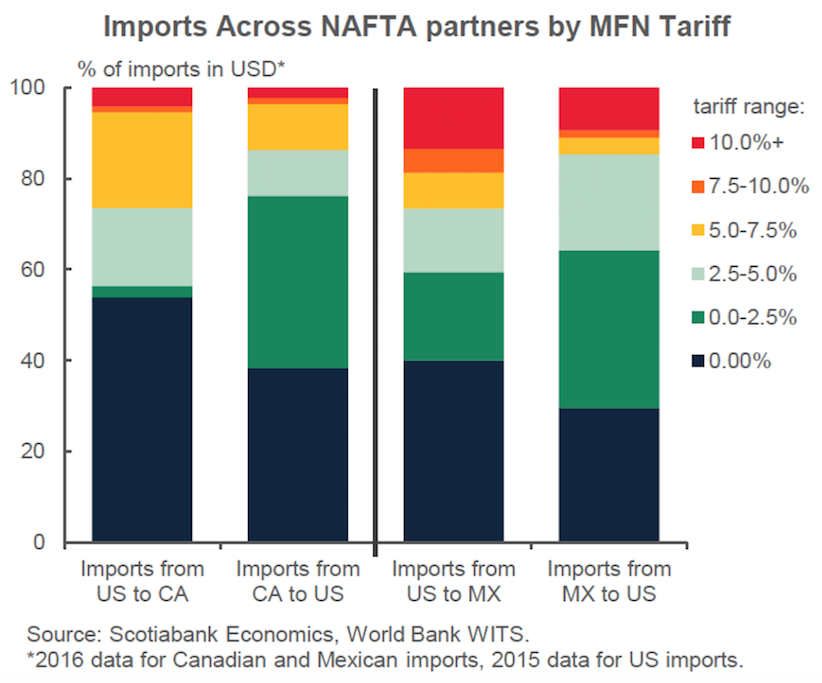 American traders are far more diversified than Canadians. More than three-quarters of Canada’s exports end up in the U.S. or Mexico, while the Americans spread the same proportion of exports across their top 15 partners. But as NAFTA talks stumble into spring, and Trump flirts with termination, he should understand the consequences for the American companies he wants to thrive. And as they calculate their leverage, so should Canadian negotiators.