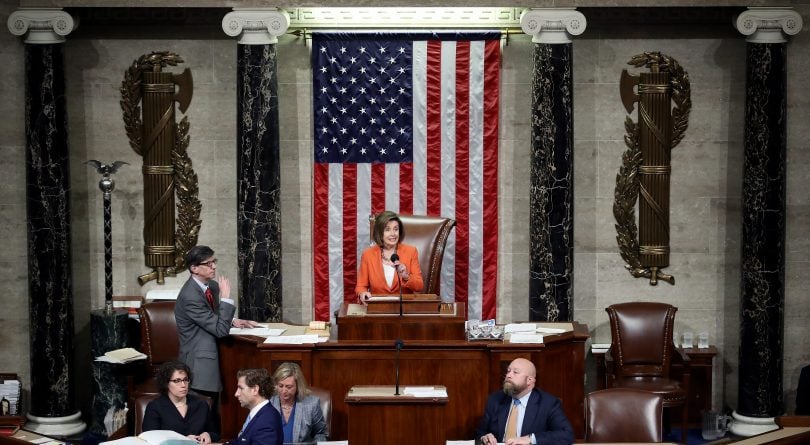 House Speaker Nancy Pelosi presides over a vote by the U.S. House of Representatives on a resolution formalizing the Trump impeachment inquiry (Win McNamee/Getty Images)

The slugger in the batter’s box with a four-seam fastball coming at his head was the nation’s new Grand Orange.

Exactly half a century ago, that name perfectly fit the beloved Daniel “Rusty” Staub, the carrot-topped right fielder for les Expos de Montréal in their freshman season, Canada’s first experience of major-league baseball in the sun of a dreaming summer. That the team lost 110 games that year only dug the passion deeper.

Half a century later, Rusty’s Expos—transplanted to the District of Columbia, transmuted in 2005 into the red, white and darker blue of the Washington Nationals, but lovingly remembered by anyone who knew little gerrymandered Jarry Park and the ecstasy of being young and in the big leagues—finally were the World Series champions. But now another, citrus-haired heavyweight, a shy fellow who often brags that he was merely the best high-school first baseman in New York State, back in his military-academy days, was digging in for the most crucial at-bat of his life.

On Thursday morning, barely nine hours after the Nats came from behind, yet again—and on the road, yet again—and with sudden home runs, yet again—to abolish the Houston Astros, the impeachment of Donald Trump once more consumed the American parliament. There will be a victory parade for the ball club here on Saturday, but it will not go anywhere near the White House.

“This is not a celebratory moment here in the capital city,” a Democratic Party leader named Hakeem Jeffries was posturing at the Capitol, already forgetting Washington’s first World Series victory since 1924, after the House of Representatives voted, along the usual, ritual, predictable party lines, to formally and officially make an investigation into the possible impeachment of Donald Trump a legislative fact.

In due time, the prosecutors promised—in two or three weeks at the earliest, or maybe after the American Thanksgiving, or maybe before Christmas, or maybe in 2020—there will be public testimony in the committees on intelligence, on the judiciary, on oversight, etc. as the Democrats try to rid themselves of the man that about one-half of the American population despises like a venereal disease, and the other one-half will defend to the last half-inning of their beating hearts.

In Congress, the Dems tried to spin Thursday’s vote as a beanball that they never wanted to deliver.

“A solemn day,” head-shook Adam Schiff, chairman of the Intelligence Committee that has been hearing damning testimony against the 45th president from several of Trump’s own diplomats and appointees in lead-lined, secret rooms for the past two weeks.

“This is a sad day,” agreed Speaker Nancy Pelosi.

Impeachment and the passage of the United States Mexico Canada Agreement, Pelosi stressed, have “nothing to do with each other.” As she has in the past, the Speaker signalled that House Dems are working toward ratifying a modified version of the trade deal. It would have passed sooner, she said, “but I didn’t want this to be just NAFTA plus a little bit.”

RELATED: And how is Trump after an insane, surreal week? Couldn’t be better.

“I make no prejudgment,” Schiff whoppered straight-faced to reporters.

“The times have found us,” Speaker Pelosi iterated, though Donald Trump has terminated the New York Times at the White House, lest it find him.

“I guess it’s only fitting that we take this vote on Halloween,” retorted Kevin McCarthy, the Republican leader in the chamber, and he groused that the Democratic majority had issued more subpoenas than laws in this ghoulish session, and he repeated the cadaverous Republican talking point that “Democrats are only trying to impeach the president because they’re scared they cannot defeat him at the ballot box.”

“The president has done nothing wrong, and the Democrats know it,” a White House statement softly texted. “Nancy Pelosi and the Democrats’ unhinged obsession with this illegitimate impeachment proceeding does not hurt President Trump; it hurts the American people.”

That Trump is not intending to sit on the bench for the next six months was evident in a campaign advertisement that tens of millions of Americans saw during the seventh game of the World Series.

“It takes a Donald Trump to change Washington,” the 30-second spot propounded, as if there might be more than one such disruptor of his rank, more than one free-swinging Grand Orange.

Alas, there isn’t. Rusty Staub passed away last April, at exactly the same age that Donald Trump is now. But on Halloween, Democrats were not hoping for the president’s natural demise—they’d rather strike him out with the whole world in the ballpark and watch him skulk off with his Louisville Slugger limply dangling.

Then, just an hour after the impeachment vote, the House chamber was empty save a dozen tourists in the upper grandstand and four, then three, then two, women in the front row of the big, brown leather chairs. One of these was Alexandria Ocasio-Cortez, the firebrand from the Bronx, N.Y. Next to her was Katie Hill of California, and Hill had come to say goodbye.

Four hundred thirty-five other legislators from both parties found somewhere else to be when Katie Hill rose to deliver her farewell speech from the floor, at 32 so young and so briefly in the big league. She is the California Congresswoman whose future-ex-husband posted nude pictures of her online, and there have been allegations and exposés of Hill’s liaison with a member of her staff.

Her resignation, she said, “is a reality that I’m still grappling with, and I will be for a long time to come.

RELATED: Which way is the whistle blowing?

“I wanted to show imperfect people that they belong. I fell short of that and I’m sorry. To my family, to my friends, to me staff, to my colleagues, to everyone who supported and believed in me, I’m sorry.

“To every little girl who looked up to me, I’m sorry. I went to the darkest places that the mind can go and I shed more tears than I ever thought possible.”

But then Kate Hill stiffened, and her last at-bat in the big leagues became much like what Donald Trump’s farewell might sound like, should it come to that—a spew of grievance and defensiveness, a tirade against “the dirtiest gutter politics that I have ever seen.”

Prurience, a chasm of partisanship, the generational divide—all were on display in the U.S. Congress. This time, all the seats chairs were empty. When the new Grand Orange comes to the plate, it will be the toughest ticket in town.