By showering approval on two men on the ideological edge of their political parties, New Hampshire sent a message to the establishment 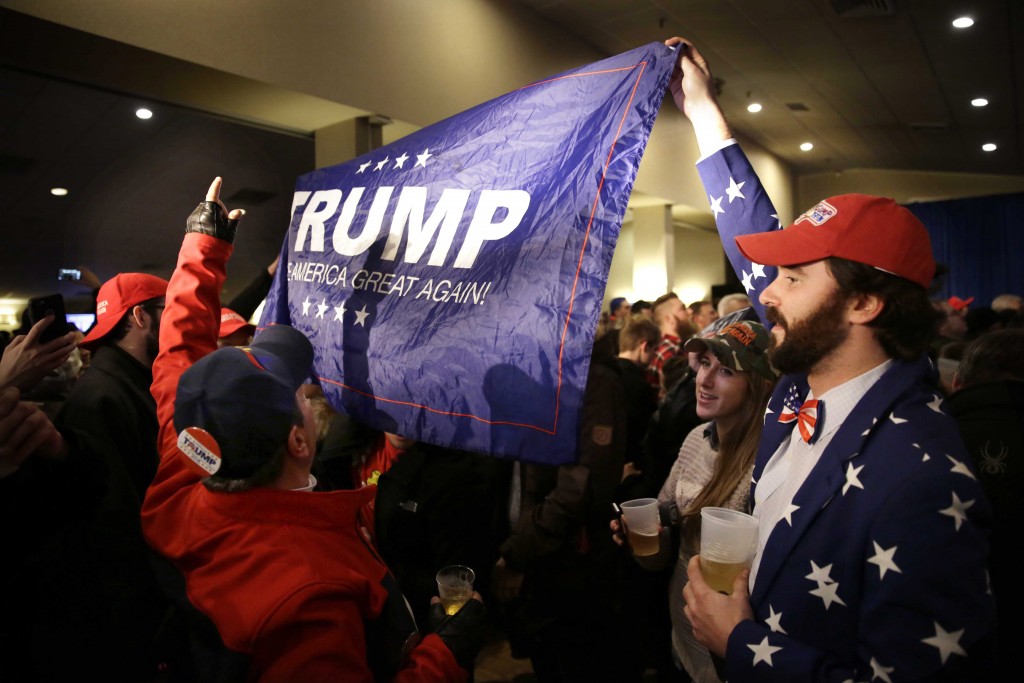 Half a million fickle, fervent, and often new New Hampshire voters lit a midwinter bonfire under an explosive American presidential election campaign Tuesday by overwhelmingly favouring a loudmouth billionaire businessman and his fiery anti-capitalist antithesis to be their parties’ nominees in the November election.

The crushing victories in the Granite State’s 25th quadrennial primary on a snowy New England day by two tough-tawking native New Yorkers—Republican Donald Trump of Queens and Democrat Bernie Sanders of Brooklyn—reversed last week’s razor-thin results from Iowa, validated months of pre-primary polling, atomized the rest of the Republican field, and reinforced the minuscule state’s century-old reputation as a maker and breaker of White House dreams.

Government officials reported record turnout in a rapidly changing state in which only 39 per cent of Tuesday’s registered voters were New Hampshire residents as recently as 2008.

Related: Inside the rise of Donald Trump

Corollary to the triumph by Sanders, who represents neighbouring Vermont in the U.S. Senate, was the belittling trouncing of former Secretary of State Hillary Clinton, whose hangdog campaign functionaries were sending out plaintive emails headlined, “No matter what happens tonight,” and, “Bernie Sanders is no revolutionary,” mere minutes after the polls opened in the morning.

“I know I have some work to do, especially with young people,” Clinton understated in a concession speech that reiterated nearly all of Sanders’s own playbook, including campaign-finance reform and impassioned anti-Wall Street drum-beating.

“Join me in building on the progress made under President Obama,” Clinton said, doubling down on her commitment to the status quo even in the wake of New Hampshire’s clear call for radical change. 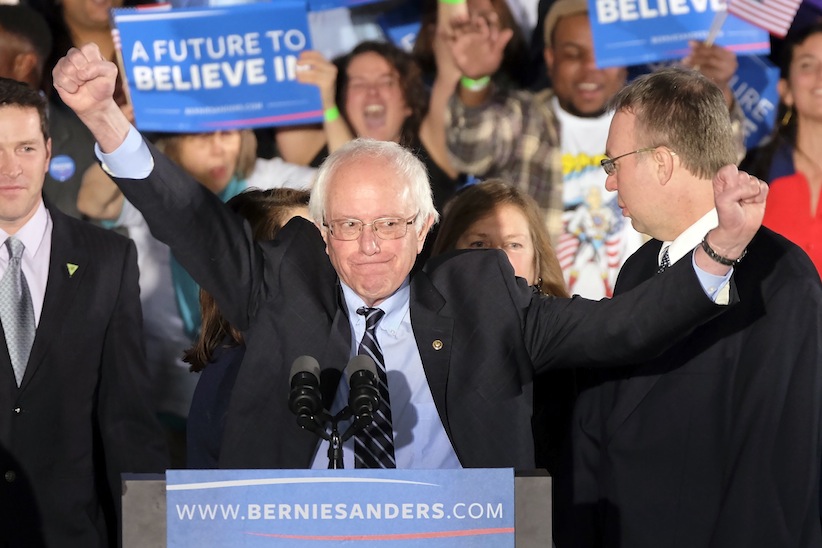 Only two dozen delegates were in play for each party out of thousands who will convene in late summer to select the actual nominees, but the mythic significance of the “first in the nation” primary will resonate nationwide for months to come. South Carolinians and Nevadans will be heard from next, introducing much larger numbers of African-American and Hispanic voters into the combustible mix, while former New York mayor Michael Bloomberg—yet another Gothamite, whose personal fortune towers over Trump’s—mulls a ride to the nation’s rescue as a third-party independent.

Clinton, who narrowly defeated Barack Obama here in 2008, succumbed to her own indelible identity as a creature of much-despised Washington, to Sanders’s unrelenting characterization of the multi-millionaire former first lady and New York senator as a groveller to Wall Street pinstripers, and to the Granite State’s extraordinarily fluid demographics.

According to research by the University of New Hampshire, 129,000 citizens here have reached the voting age of 18 since 2008, while 68,000 of their parents and grandparents died. By that reckoning, the New Hampshire that crowned Bill Clinton “the comeback kid” in 1992 no longer exists.

If anyone had predicted a year ago that the vaunted, venerable New Hampshire primary would be swept by a 73-year-old democratic socialist and an easily lampooned reality-show cock-of-the-walk, he would have been institutionalized. But the institution of walk-in democracy held to form on Tuesday, as hundreds of thousands of first-time voters and last-minute party-changers flipped a middle finger to the so-called “political establishment.”

A Maclean’s correspondent who spent the morning in the affluent town of Hanover, home of Dartmouth University and within sight of the Vermont mountains, heard voter after voter declare for Sanders and his plans to radically restructure the American economy by heavily taxing Trump and his silk-robed ilk.

“I really like his idea about free college education,” said 18-year-old Hayley Atwood, a senior at Hanover High School, after voting for the first time in her life in her own school building. “I know that some people say that he can’t really carry out all his promises, but I think that, with time, he can.

“He’s been saying so many times that we are the No. 1 wealthiest country in the world and that we can do anything if we really try.”

“It felt really cool to vote,” Ms. Atwood said. “Kind of weird but awesome, that I will be able to say for the rest of my life that, the first time I ever voted, I voted for Bernie.”

“I voted for Hillary, but I like Bernie’s policies better,” said another Hanover High senior, Flora Cullen. “I just feel that, if he was elected president, he wouldn’t get any of his ideas through Congress. Bernie is more of an idealist, but Hillary is more in the middle.” 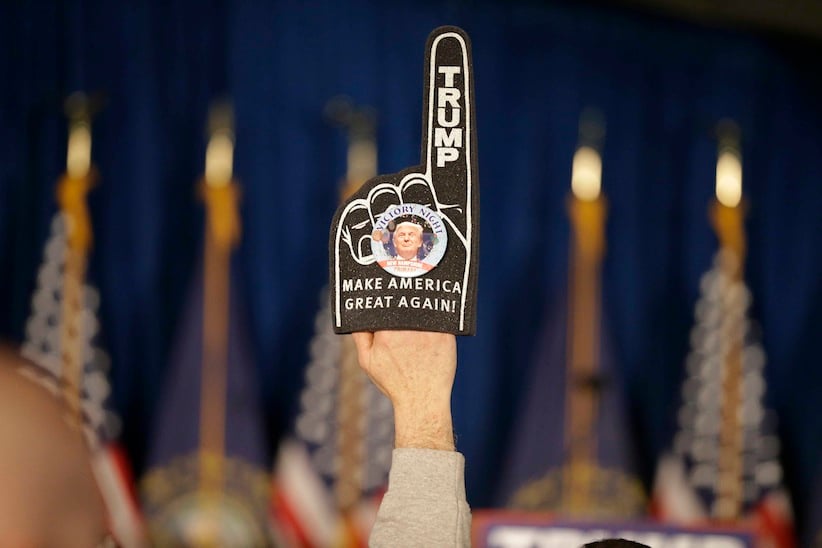 On the Republican side, Trump’s narrow defeat in last week’s Iowa caucuses was obliterated in a comparative landslide—one-third of the total votes—that scattered the rest of the Republican field to the brink of oblivion, with 48 states yet to be heard from and election day still nine months away.

Governor John Kasich of Ohio was a late-closing surprise, eclipsing right-wing senators Ted Cruz and Marco Rubio and former Florida governor Jeb Bush in early returns at the head of the second tier. How many candidates—and their wealthy backers—will persevere in swimming against the Donald’s tide? That will become clear in the days to come.

Early on Tuesday morning, a few dozen miles up the Connecticut River valley from Hanover, far from the ivied halls of Dartmouth and the upper-middle-class Bostonian suburbs that now thickly fill New Hampshire’s southern tier, carloads of impatient Trump supporters were idling in their pickups and family vans even before the polls opened.

“He’s the one to turn the economy around,” said one man, a county corrections officer, who asked not to be named. His county is one of many in New Hampshire that has been ravaged by an epidemic of heroin trafficking and tragedies. (“Pair sentenced in heroin scheme,” read the headline in the local Journal Opinion, detailing the sentencing of another prison guard for having run a smuggling ring inside the county jail.)

“What is the big issue around here?” the man was asked.

“Do you think Donald Trump knows anything about health care?”

“Not necessarily, but I’m voting for him anyway.”