In the Rose Garden, the wake for Barack Obama began 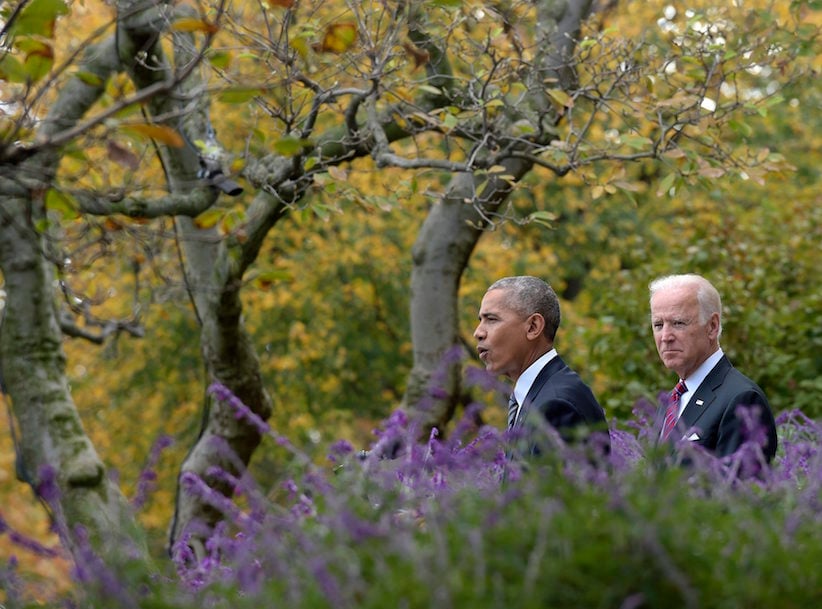 As the reality of an astonishing Novus Ordo Seclorum—the new order of the ages foreshadowed two centuries ago on the Great Seal of the United States and on the back of the one-dollar bill—began to seep into American soil Wednesday, hundreds of young and broken-hearted administration staffers sulked into the White House Rose Garden to contemplate their looming unemployment and a presidential lineup card that soon will read Washington … Jefferson … Lincoln … Roosevelt … Roosevelt … Kennedy … Obama … Trump.

This was the scene at midday on the famous, muddy, trampled green outside the Oval Office: about two hundred solemn minions of the West Wing, the Office of Management and Budget, the Office of Community Engagement, and numerous other agencies embracing each other and openly weeping for their country, their careers, and their lame-duck commander. Seventy-one days remain on Barack Obama’s lease, but his wake began on Wednesday.

THE DEFINITIVE READ: The rise of Donald Trump

Under a drippy, then blue, autumn sky, it was a tableau of pashmina scarves, hipster eyewear, little black dresses, skinny ties, and tears. A giant magnolia tree planted by Andrew Jackson soared over the mourners’ heads, and blooms of white and crimson lingered on the leafless bushes.* In Washington, it may have been a devastating Election Day for Democrats, but it was a good year for the roses.

“There’s no part of my brain that allows this,” a Maclean’s reporter overheard one staff member saying. And another young woman to a sobbing colleague: “It’s all about the initial getting-over, and then just do your job.” Kleenex clutched and hankies wringing, the bereaved Millennials awaited a soothing word from the man who had inspired them to government service, but who then failed to achieve enough shared prosperity and civic order from sea to sea to forestall the rise of a pouting, sneering successor with zero experience of public service.

Some in the crowd held cellphones close to their ears, listening red-eyed to the belated concession speech of the woman whose celebrity-hugging, Establishment elitism landed with a thud on Election Day across the Midwest, the Southeast, the Rocky Mountains, the Piedmont, and the Great Plains.

“Donald Trump is going to be our president,” Hillary Clinton said in Manhattan. “We owe him an open mind and a chance to lead.” 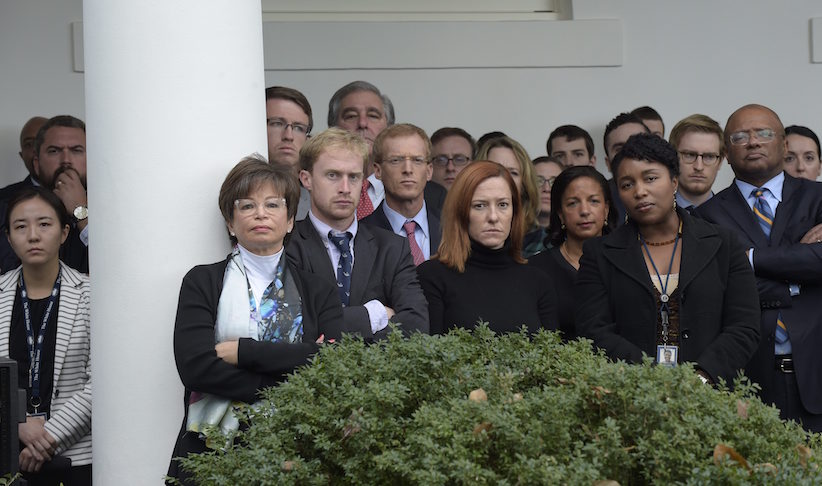 New York, Chicago, Washington, Los Angeles, San Francisco, Seattle—the great metropolises had hewed to Mrs. Clinton’s plea for the status quo. But the (mostly) white men and women of the red states—and the 229-year-old electoral formula conceived by the Founding Fathers, so long ago—deprived her of a return to the bedroom she once shared with her wandering Willie.

“Don’t you think it’s time we put a woman in the White House with a whole new attitude?” Sheryl Crow sang on Mrs. Clinton’s pre-rally music loop on the campaign trail. But now that woman will be the former Melania Knavs of small-town Slovenia, who will be the first foreign-born first lady since the 1820s, accompanied by 10-year-old Barron William Trump, who will be the first male child under the age of 18 to live with his parents at the White House since John-John Kennedy. Paterfamilias Trump will meet with the outgoing President on Thursday.

At Wednesday’s funeral for Hope and Change, Obama and Vice-President Joseph Robinette Biden emerged from the Oval Office beaming—these two, at least, will have no trouble finding work come Jan. 21.

“The presidency, and the vice-presidency, is bigger than any of us,” Obama declared, consoling his distraught disciples. “I think of this job as being a relay runner. You take the baton, you run your best race and, hopefully, by the time you hand if off, you are a little further ahead, you made a little progress. I can say that we’ve done that.”

“We are all rooting for his success in uniting and leading the country,” the President managed to say of Donald Trump, straight-faced.

When Obama finished his eulogy and walked, arm in arm with his veep, back to his round-walled sanctum, the staffers stood and applauded the empty podium for more than a minute, not wanting to let go. Their hero had left them a legacy in tatters; and finally, the cheering stopped.