Funded by billionaire creationists, the museum of the Bible is getting attention mainly for what's missing: lots of evangelizing 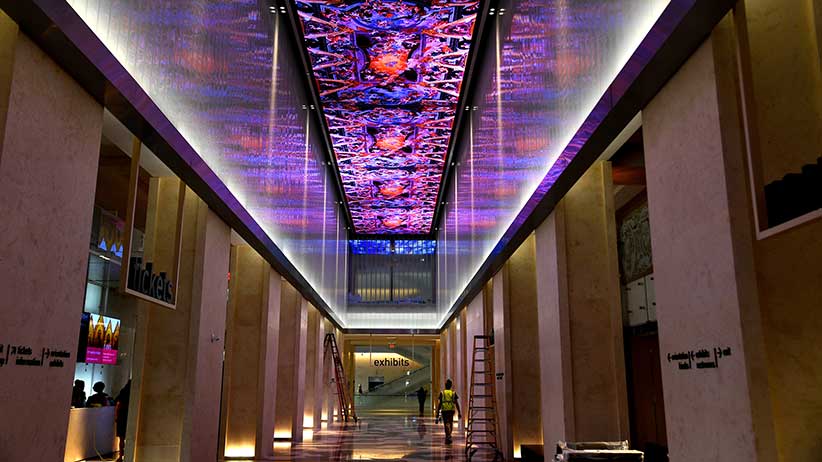 The high-tech ceiling in the hallway at the entrance to the museum of the Bible will feature digital images and movies as well as running scripture verses. The museum is set to open in November 2017. (Photo by Michael S. Williamson/The Washington Post via Getty Images)

Twin scents of sawdust and compromise swirl through the gleaming new museum of the Bible—small m, big B—that will open next month in a former furniture showroom and municipal meat locker a few blocks from the halls of Congress, bringing 430,000 square feet of exhibition space, interactive displays, children’s activities, “4-D” thrill rides, academic seminars, Holy Land snacks and ecclesiastical controversy to the most cynical city in the world.

Endowed by their creators with US$500 million dollars in cash but only a comparative handful of world-class artifacts, the galleries will overtly promulgate little or none of their benefactors’ Oklahoma Protestant fundamentalism. Intended initially to be a shrine to the literalist creationism endorsed by the billionaire Green family that owns the Hobby Lobby chain of Sabbath-observant craft stores, the museum’s focus has shifted from trumpeting the verity of the Gospels to providing jaded Washingtonians with infotainment and a first-century lunch.

In one display—a Nazarene village built of rough-hewn stones, fibreglass sheep and plastic produce—Jesus Christ is depicted not as the redeeming Son of God but as “a popular teacher.” (All that is missing is an Animatronic herdsman singing “A shepherd’s life for me.”) Homosexuality, abortion, school prayer, taking a knee during the national anthem—all have been left aside, at least in the exhibits that a Maclean’s reporter was permitted to tour this week. The eight-storey warehouse of Holy Writ, it seems, will be as much about hummus on pita as it is about the Pietà.

Physically, the museum is an airy and sun-soaked acropolis, a glowing manifestation of Genesis 1:3. Visible from its glass-walled, roof-top terrace are the twin towers of worldly Washington power: the Capitol dome and the Trump International Hotel. The front gates, 40 ft tall, replicate the printing plates of the Gutenberg Bible. Admission will be free. But there is a clandestine mission behind the stunning architecture and high-tech displays.

“Our purpose is to trick people into reading the Bible,” confesses Dr. Gordon Campbell of the University of Leicester, a prominent Anglo-Canadian scholar who is advising the museum’s board of directors on content, legitimacy and historical accuracy. “It’ll be good for them.”

At an occasionally tense and defensive press conference on Tuesday, Cary Summers, the museum’s president, said that the museum will be “a big umbrella” that welcomes “people of all faith . . . or no faith. You draw your own conclusion after you’ve been here.”

“We’re going to let the Bible stand on its own two feet,” Summers said. This was a distinct about-face from his employers’ original statement of purpose, which was “to bring to life the living word of God . . . and to inspire confidence in the absolute authority of the Bible.”

“It’s the story of a book,” echoed Dr. Seth Pollinger, director of museum content. “The idea of debating the veracity of the Bible—it just doesn’t fit the story.”

In the absence of the explicit evangelizing they may have been expecting from the Green family, some previewers have taken to wondering what exactly the story is. “D.C.’s huge new Museum of the Bible includes lots of tech—but not a lot of Jesus,” the Washington Post headlined one article. “Just what is the museum of the Bible trying to do?” begged Politico.

“I think that when they started out, they were talking in terms of biblical apologetics—the idea that archeology would show that the Bible is true,” answers Campbell, who was raised in Port Credit, Ont., and who earned degrees from Waterloo and Queens Universities before pursuing an extraordinarily broad academic career in Britain. (Campbell is the official Public Orator at Leicester, a position formerly held by persons ranging from the Rev. Desmond Tutu to the crooner Engelbert Humperdinck.) “My sense of the political side of it was that for them, sitting in the evangelical hotspot of Oklahoma City, they felt that Washington needed what they would describe as a Christian presence.

“The first concept has receded completely. The second may or may not be realized, depending on what the museum becomes and who chooses to visit it. If it becomes a platform for various evangelical or Republican causes in Washington, that would be damaging. But if it manages to rise above the political, that would be wonderful.

If there is a consistent theme to exhibit floors that are partitioned into expositions of the Bible’s origins, the global spread of Judaism and Christianity, and the Good Book’s role in the settlement and establishment of the United States of America, it is simply to display the Bible’s manifold impacts on all aspects of Judeo-Christian life.

Four weeks before the building’s scheduled mid-November opening, in an epoch when the Protestant Right is in firm control of state and local governments throughout the old Confederacy and in almost every rural county between the coasts, the issues that have plagued the project from its first breath continue to generate more heat than the artifacts themselves. Most prominent is the question of origins—not humankind’s co-existence with dinosaurs, as depicted at the various arks of credulity in the Bible Belt (some of them bankrolled by the Greens) that date God’s creation of the Earth to a Sunday in October, 4004 BC—but whether each and every one of the Hobby Lobbyists’ Torah fragments, Dead Sea parchments, and age-stained edicts is a certifiably kosher treasure, an unclean forgery or blood-stained plunder looted from the killing fields of Mesopotamia and spirited westward by nefarious eBay-ers for sale to First World hoarders.

In July, macramé magnate Steve Green and his kinsmen were assessed a US$3-million fine by the Department of Justice after more than 5,000 pre-Christian tablets, bricks and seals they had purchased from a middleman were found to have been pilfered from archeological sites in shattered Iraq. This public shaming came three years after the Greens’ attorneys had succeeded in convincing the Supreme Court that their refusal to provide certain “morning-after” contraceptives and intrauterine devices to its 30,000 employees under the Affordable Care Act does not violate the church-state clause of the U.S. Constitution. Burwell v Hobby Lobby was hailed as a landmark of religious freedom by the nation’s millions of fervent evangelicals; whether they will accord as many hallelujahs to the Greens’ “non-sectarian” museum remains to be seen.

The federal penalty in the looted-objects case “was a nightmare for all of us” that occurred because the Greens “took advice that wasn’t sound,” said acquisitions advisor David Trobisch, ThD, while noting that “those items were cuneiform—they had nothing to do with the museum.” Trobisch insisted that “we’re not showing anything where the paperwork is not solid” and that “we will be repatriating anything if it’s clear that it was looted.”

Why a half-billion-dollar cathedral consecrated exclusively to the Old and New Testaments—and pointedly not including the Holy Koran or the Book of Mormon or any other, later, opposing, referential or derivative tract—is necessary at all in a city replete with superlative educational institutions is not for a non-billionaire to decide. (The exclusion of exhibits pertaining to the origins of Islam is explained by Trobisch as being due to “a security issue dealing with these topics.”) But this crowning monument to the Greens’ devotion is hardly the only supposedly secular temple in Washington in which a seeker can immerse himself in the Book.

Just a few blocks away at the National Gallery of Art, El Greco’s St. Martin and the Beggar and his emaciated St. Jerome are displayed only a few steps from Rubens’s The Meeting of Abraham and Melchizedek and Daniel in the Lions’ Den, del Castagno’s St. Francis Receiving the Stigmata, and Bassano’s The Miraculous Draught of Fishes, each canvas inviting the impious 21st-century viewer to Google the origins of stories that, only a couple of generations ago, almost every American would have known, chapter and verse.

Thomas Jefferson’s cut-and-pasted personal Bible, with all references to supernatural miracles excised by the skeptic of Monticello, was the focus of a special exhibition in 2012 at the Smithsonian’s National Museum of American History. The new National Museum of African-American History and Culture holds the tiny testament once owned by Nat Turner, who led a brave but suicidal rebellion of slaves and free blacks in Virginia in 1831. Even the Capitol building itself contains numerous monuments to religious giants, including Mormon patriarch Brigham Young and missionaries Father Damien, Marcus Whitman, Mother Joseph and Father Junipero Serra, who holds aloft a crucifix in Statuary Hall.

Yet at the same moment, a 40-foot-tall concrete Peace Cross at a busy intersection in a Maryland suburb, erected in 1925 to honour the fallen fighters of the First World War, was deemed to be an unconstitutional mingling of church and state on public land this week by the U.S. Court of Appeals.

Amid this cacophony of consecration and confusion, the museum of the Bible throws open the Gutenberg Gates.

“I come as an academic and nothing more than that. My interest in the Bible as literature. These are absolutely personable people of integrity, but they are not people with whom I share a view of the world. I hope they’re pleased. But this is not an evangelical museum and it is not a museum of evangelical Oklahoma City aspirations. It is a Washington museum.”