Is Donald Trump a Russian agent?

Around the world, intelligence agencies, politicians, and the public are asking the same question: is it really possible Donald Trump is working with the Russians?

It’s hard to believe we are having this conversation just days before Donald Trump is sworn in as the 45th president of the U.S. But the constant drip of accusations has turned into a flood and the Senate select committee on intelligence, in an unprecedented move, just announced it will investigate links between the new administration and the Kremlin. Around the world, intelligence agencies, politicians, and the public are asking the same question: is it really possible Donald Trump is working with the Russians?

The case for the prosecution is mostly circumstantial, but it’s sizable. Let’s start with Trump’s deep connections to the Kremlin. These go back to 1986, when he first visited Moscow at the invitation of the Russian ambassador to the U.S. Trump received the red-carpet treatment and met with many Politburo officials. Curiously, on his return to the United States, he immediately spent $90,000 on full-page ads in several national newspapers condemning Washington’s foreign policy and American allies who “can afford to defend themselves.”

In the decades that followed, Trump used his Moscow connections to chase rubles. His vodka deal and hotel partnerships failed. But he found success selling real estate to wealthy Russian investors. Trump saw the post-Soviet robber barons as clientele worth cultivating; returning from one visit to Moscow, Trump boasted in an interview with Real Estate Weekly “almost all of the oligarchs were in the room.”

More notably, during this time Trump built extensive financial links to Russia. After a string of failures and bankruptcies, Trump’s business empire was facing collapse and American banks were refusing him credit. Luckily for him, several institutions with Russian connections stepped in to help bail him out. His now-bankrupt Trump Tower in Toronto, for example, was funded with money from two Russian-Canadian billionaires. More notable was his relationship to Bayrock, a real estate development company backed with Russian money and linked to bribery, racketeering, money laundering, and the Russian mob.

MORE: The disturbing parallels between Trump and Putin

The ties between Trump’s immediate circle and Moscow are far easier to track. His closest advisers like Paul Manafort, Gen. Michael Flynn, Carter Page, and Richard Burt, have all maintained tight personal and business connections to the Kremlin and Russian oligarchs; or, in the case of his secretary of state nominee Rex Tillerson, with Vladimir Putin himself. All of them, like Trump, have consistently chosen Russia’s side over America’s in any foreign policy dispute.

Evidence of Russian efforts to interfere with the U.S. election in support of Trump are equally clear. More than a dozen U.S. intelligence agencies, several private Internet security companies, and numerous allied governments have all concluded that Russian hackers attacked the Clinton Foundation and the Democratic Party, and then carefully leaked emails to improve Trump’s electoral odds. It is worth noting that the Republican Party was also hacked, but the Russians did not leak those emails, and instead kept them for possible future use.

There are even more dramatic, albeit as yet unsubstantiated, reports circulating that claim the Kremlin has kompromat (blackmail material) on Trump; that they have been in regular contact with his team throughout the election; and that Trump’s people have even passed confidential information back to Moscow in return for continued support. These claims, as outlandish as they sound, are credible enough that the FBI felt it was necessary to share them with President Obama and president-elect Trump in recent intelligence briefings. 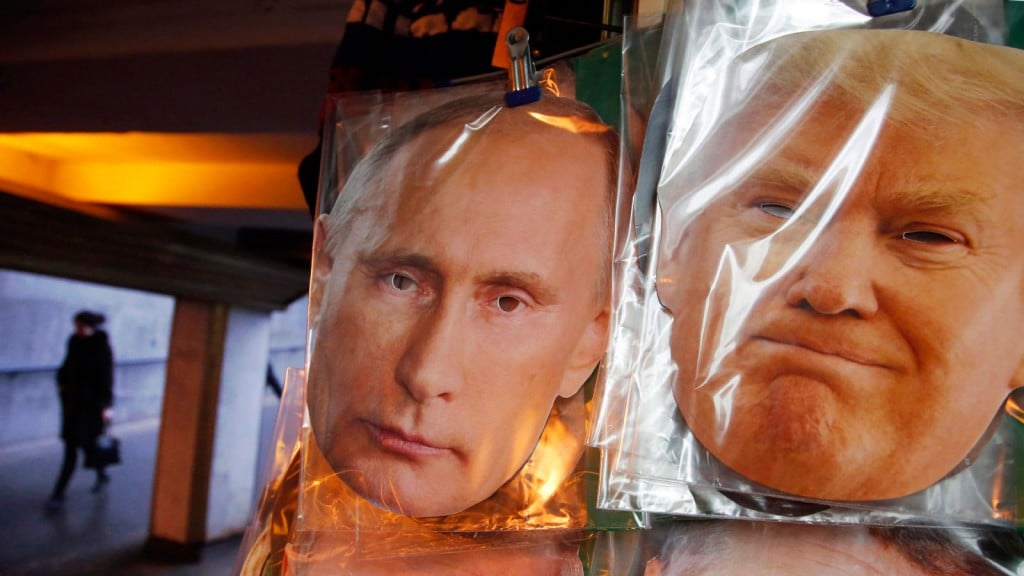 Which brings us to: Why? Why would Moscow take such a dangerous and unprecedented risk by meddling in an American election? Because Russia is weak. Its economy has collapsed; its GDP is now smaller than Canada’s. A country that once led the world in science now trails Ireland in number of patent grants. Life expectancy has fallen nine years behind America’s. Recent victories in Ukraine and Syria belie a military so worn out its only aircraft carrier has to be accompanied by a salvage tug. This is a country that simply cannot compete in the liberal democratic world order, therefore it is seeking to change the rules by discrediting democracy, weakening the Western alliance, and undermining the global leadership role of the United States—three things deftly accomplished by interfering in the election.

And in choosing to back this particular dark horse, the Russians earned a further bonus: Trump is the most slavishly pro-Russian Western leader since the end of the Second World War. Throughout the campaign, even when it was to his political disadvantage, he never wavered from praising Putin and defending his policies, including the bombing campaign in Syria and the invasion of Ukraine. In fact, once nominated, the only change Trump made to the Republican Party platform was to remove a promise to support Ukraine against Russia. He has continually attacked American allies like Germany and the EU, and criticized NATO as “obsolete.” And if the only thing Trump does is drop the Russian sanctions, as he has suggested he may, that alone would more than justify Moscow’s risk. Everything else is just icing on the cake.

So is Donald Trump a Kremlin agent? We may be ankle-deep in Russian rumours, but it’s still too incredible to conclude he’s a spy. It is more likely Trump is simply a victim of circumstances: feeling exposed by cheap credit, grainy videos, and election meddling, he now believes it’s in his best interest to be as helpful as possible to his Moscow friends. As others have argued, Trump is probably just a polezni durak: the Kremlin’s useful idiot.

What is absolutely certain, however, is that if Trump were a cabinet nominee (and not a cabinet nominator) his many Kremlin connections, conflicts, and compromises would make it impossible for him to obtain a security clearance. That fact alone makes him dangerously unfit for office, regardless of everything else.