Is Obama's plan to cure cancer a 'moonshot'? Or a 'Pluto-shot'?

Joe Biden is 'mission control' in a fight to cure cancer once and for all. Anne Kingston on why that is a flawed enterprise. 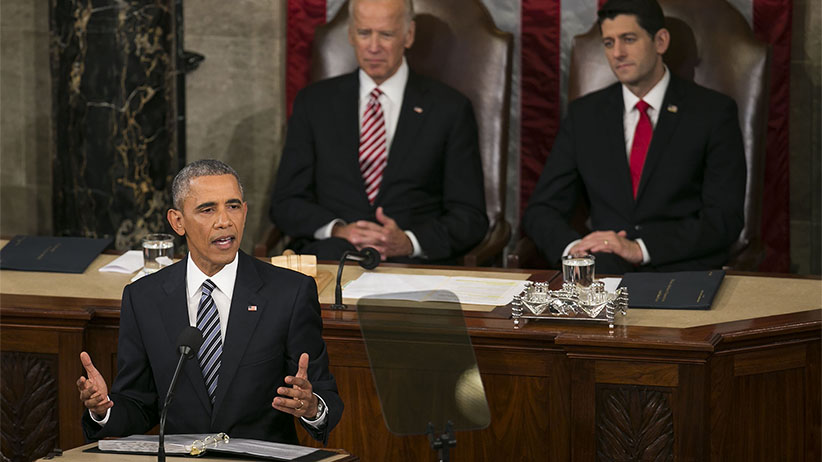 President Barack Obama speaks during his final State of the Union to a joint session of Congress in the House Chamber on Capitol Hill in Washington, Tuesday, Jan. 12, 2016. Behind him Vice President Joe Biden and House Speaker Paul Ryan listen. Al Drago/CQ Roll Call/Getty Images

Placing Joe Biden in “mission control” of a “moonshot” “to cure cancer once and for all” in Tuesday’s State of the Union address was a strategic masterstroke by Barack Obama, one destined to elicit a reflexive feel-good response for a new national initiative to end a ruinous disease that touches us all. But the compelling space-age rhetoric can’t help but lay bare some of the flaws within the enterprise; and these suggest that this quest for a “cure” for cancer might be more rightly called a “Plutoshot.”

Obama referencing “moonshot,” already buzzword de jour in Silicon Valley (and now destined to end up on “2016 obnoxious business clichés” lists), is both a no-brainer and telling. The term popularized in the public imagination by the stunning successes of the Apollo program from 1969 to 1972 is shorthand for the importance of aiming for the once-impossible—as well as for American scientific and technological prowess. So it’s not surprising tech titans have glommed on. Google (now part of holding company Alphabet) even has an official “Captain of Moonshots,” Astro Teller; last year, he described his job to Maclean’s as “trying to systemize the process of taking these moonshots.” Only three days ago, one such “moonshot” saw biotech giant Illumina, along with such illustrious backers as Bill Gates and Jeff Bezos, launch a startup to create a single blood test to detect all cancers.

Moonshot, a term embodying both lofty aspiration and achievement of that aspiration, is custom-made for political rhetoric as well. Joe Biden employed it to touching effect last spring in his first public address after his 46-year-old son Beau died of brain cancer: “I believe we need a moonshot in this country to cure cancer,” he said. The imagery has added resonance coming days after David Bowie died of the disease; the singer was inexorably twinned to space via his haunting Space Oddity, a song performed from space by astronaut Chris Hadfield during a spectacularly successful mission. Bowie’s version, however, is one of ultimate failure and disconnect from ground control: “And I’m floating around my tin can/Far above the Moon/ Planet Earth is blue/ And there’s nothing I can do.”

Of course, Obama is not the first president to vow to defeat the dreaded diagnosis; Richard Nixon promised the same in the early 1970s. For the billions of dollars spent in the intervening decades, survival rates for many cancers has not budged since the 1950s. Yet the lack-of-progress message has been muted due to confusion over how to interpret survival and mortality rates. In that same period, medical knowledge has expanded to an understanding that “cancer” is a misnomer; we now think in terms of cancers, given the existence of more than 100 types characterized by abnormal cell growth, stemming from causes that range from radiation to chemicals to viruses to genetics. So adhering to a one-disease, one-cure model could prove quixotic.

New thinking suggests that seeking to “cure” or eradicate cancer is misbegotten. In his acclaimed 2013 book The Cancer Chronicles: Unlocking Medicine’s Deepest Mystery, George Johnson writes that decades of research have forced scientists to reconcile themselves to the paradox that most cancers result from the very cellular activities that support life, not only from destructive environmental culprits like cigarette smoke and UV rays. That means fixing the mechanisms that underlie cancer would also disrupt the cellular functions that keep us alive and evolving. Cancers in children tend to include fewer mutations, which make them more curable, Johnson writes. That’s not the case for cancers in older patients which are believed to result from the accumulation of many mutations over time. Johnson’s conclusion upends the orthodoxy underlying an entrenched cancer treatment complex  worth $100 billion globally: “The best response might not be to fight back with chemotherapy and radiation, increasing the stress,” Johnson writes, “but to somehow maintain the exuberant cells—the tumor—in a quiescent state, something that can be lived with.”

Exactly how Obama’s cancer-busting project will play out is not yet clear; the president’s comments were brief. In a statement, Biden revealed he’d been laying the groundwork for months, meeting with researchers, philanthropists and physicians. Moonshots, we know, are destined to be expensive. Already the vice-president has lobbied for additional federal funding for research; that money was delivered in a spending bill passed in December that included a $264-million boost to the National Cancer Institute’s budget. In an ironic twist, NASA, the agency responsible for actual “moonshots,” has suffered budget cuts during the Obama administration—and received “a pittance compared with pretty much everything else the government does,” according to one critic.

Spending on the “cure” also deflects attention from the burden—emotional, physical and financial—that the disease places on patients and families, particularly in the U.S. The cost of cancer drugs routinely tops $100,000 annually; a new melanoma drug costs $256,000 a year. Even Joe Biden’s wealthy family was not exempt; the VP recently acknowledged that the president offered financial aid when his son fell ill. As Biden spearheads this new initiative, he also serves as a timely reminder: as wonderful as it is to shoot for the moon, it’s crucial, as David Bowie so poignantly reminds us, not to allow us to lose sight of Planet Earth.

FILED UNDER: Barack Obama cancer Editor's Picks state of the union State of the Union 2016