Is this the craziest week in a crazy year of Donald Trump?

His campaign has been tied to Wikileaks. He's cozied up to a human rights abuser. His attorney general is being grilled. And it's only Tuesday. 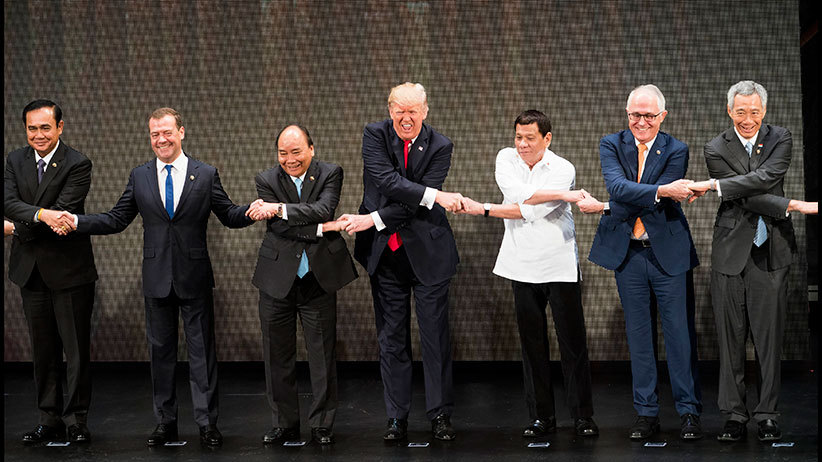 There’s no real way to quantify which week truly has been the craziest since Donald Trump took office—so many to choose from—but this week is already a frontrunner.

Weird photo ops? Check. Trump laughing it up abroad with a world leader known for human rights abuses? Indeed. A major Republican sex scandal in the U.S. threatening to tear the party apart? Yep. An attorney general suddenly remembering details about the Trump campaign and Russia? Yes. And at the same time facing pressure to name a special counsel to investigate Hillary Clinton? That too. How about the president’s own son tweeting out documents of his conversations with WikiLeaks? Of course.

And that’s not counting all the lies, misleading statements or otherwise incorrect claims that have become the norm under Trump’s administration. Everything seems to be spinning out of control—and it’s only Tuesday.

Awkward photo ops aside, Donald Trump was chuckling when Filipino President Rodrigo Duterte called journalists “spies” on Monday. Duterte probably wasn’t joking, as at least 42 journalists have been killed in his country over the past decade, according to a Committee to Protect Journalists report that ranks the Philippines fifth worst in the world for unsolved journalist murders. Duterte even bragged the week before about killing someone when he was a teenager for giving him the wrong look.

During a visit to Manila, Trump said he has a “great relationship” with the Filipino strongman. They “briefly” discussed human rights abuses in the Philippines, according to the White House, although a spokesman for Duterte said the topic wasn’t brought up at all. Although Duterte did serenade the U.S. president, singing You are the light to him at a summit dinner, supposedly at the request of Trump.

Jeff Sessions’s memory is getting clearer.

Trump’s attorney general rejects any notion that he lied under oath during a previous meeting with Congress. Instead, he said he simply didn’t remember meeting with George Papadopoulos, a Trump campaign aide, who told Sessions about the possibility of setting up a meeting between Trump and Russian president Vladimir Putin. But with news reports surfacing about the 2016 meeting where such talks occurred, and the attorney general invited back to update the House Judiciary Committee, Sessions said: “I do now recall the March 2016 meeting at Trump Hotel that Mr. Papadopoulos attended, but I have no clear recollection of the details of what he said during that meeting.”

With regards to several Republicans who hope to open an investigation into Hillary Clinton, something Trump has repeatedly called for, Sessions said there’s “not enough basis” to appoint a special counsel for such a federal investigation.

Don Junior has a leak.

“I love WikiLeaks,” Donald Trump said on the campaign trail last year. After all, they were releasing dirt on his competition, namely the emails of Clinton’s campaign manager John Podesta.

Who else enjoys WikiLeaks? Turns out Trump’s son, Don Jr., likes them enough to be in direct contact with the website during the election campaign, according to a report in the Atlantic.

Obviously, Don Jr. is trying to downplay everything by releasing photos of the back-and-forth communications they had via Twitter’s direct messenger.

Here is the entire chain of messages with @wikileaks (with my whopping 3 responses) which one of the congressional committees has chosen to selectively leak. How ironic! 1/3 pic.twitter.com/SiwTqWtykA

However, the fact that they were in talks to begin with—with both sides asking for information from the other—leaves many to wonder if there was also coordination against Hillary Clinton.

On one occasion, after WikiLeaks asked Don Jr. to tell his dad to tweet about a particular link, it takes Trump minutes until he tweets out support for WikiLeaks—albeit without the requested link.

Coincidence or not, there’s no denying now that there was direct contact between the two sides.

At least five women are now publicly accusing Alabama Republican Senate nominee Roy Moore of sexual misconduct, with allegations ranging from attempted rape to a sexual encounter in the 1970s with a 14-year-old when Moore was 32. (Moore is now 70.)

Moore has denied the allegations. House Speaker Paul Ryan, however, has joined a growing number of Republicans calling for Moore to step aside in his quest to win the Senate seat. Jeff Sessions equally says he has “no reason to doubt” the accusers.

One person who has remained silent on this issue, however, is Donald Trump. In September, Trump tweeted about meeting with Moore, who “sounds like a really great guy” but has been relatively silent on the scandal since it emerged last week. His press secretary told reporters: “The president also believes that if these allegations are true, Judge Moore will do the right thing and step aside.” That doesn’t look like it’s going to happen.

When pressed further by reporters in person about Moore’s scandal, Trump said: “Honestly, I’d have to look at it and I have to see,” adding his focus was on his trip abroad meeting with the leaders of Russia and China, among other nations.

Others are asking if the GOP is willing to say they believe Moore’s accusers, how about believing the women who’ve accused Trump?