It's time to say goodbye to the Clintons

Hillary is back, and her daughter Chelsea is stepping up too. Why this Clinton political revival is incredibly unhealthy for America. 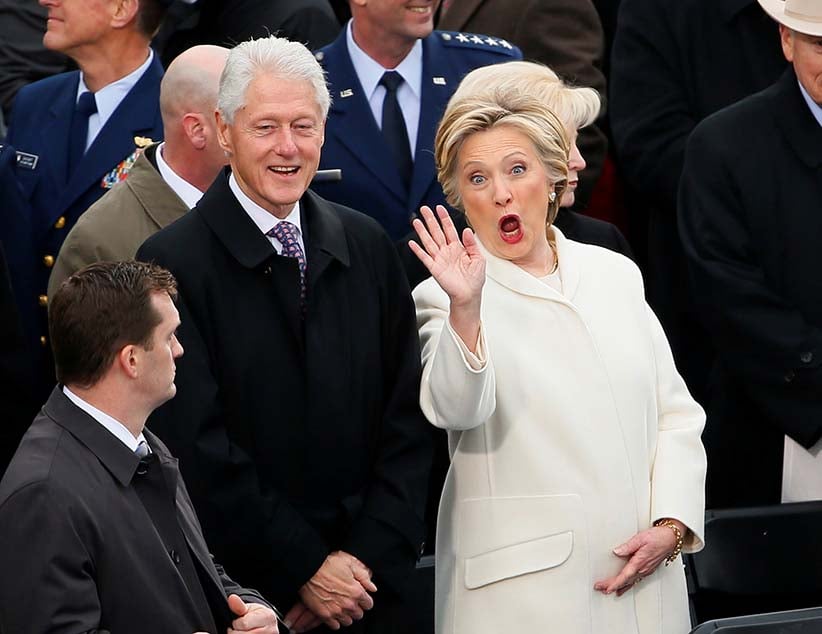 Former Secretary of State Hillary Clinton waves as she arrives with her husband former President Bill Clinton during inauguration ceremonies swearing in Donald Trump as the 45th president of the United States on the West front of the U.S. Capitol in Washington, U.S., January 20, 2017. (Rick Wilking/Reuters)

I can’t imagine how horrible the night of Tuesday, Nov. 8 was for Hillary Clinton. To appreciate it, you have to consider how she had dedicated her entire life to public service. She spent years helping her husband climb up from law student, to governor, to president. As first lady, Clinton laboured thanklessly on healthcare reform, in the face of sexist and partisan attacks. Then she was forced to eat ashes as her husband dragged her and their daughter over the scandal sheets and into an impeachment trial.

When Bill stepped down at the end of his second term, Hillary stepped up. Her sharp mind and unparalleled work ethic carried her into the Senate, and if it weren’t for a wild card out of Chicago, she would have won and deserved the Democratic nomination for president. Undaunted, she then loyally served as an effective secretary of state, managing one crisis after another.

Finally, at the age of 68, it was her turn. Clinton embarked one more time on the presidential campaign trail. Shackled by Benghazi and emails, both largely meritless accusations of wrongdoing, she nonetheless marched tirelessly back and forth across the country. The crowds were not great. People talked about Clinton fatigue. She looked unwell at times. But she kept pushing, and she did the work.

By contrast, her opponent Donald Trump skipped the reading. He slouched through the campaign, giving the same fraudulent speech again and again. Trump stepped on every scandalous land mine known to American politics from sexual assault to tax fraud. He introduced a few new ones, like Russian spies and insulting Gold Star families. When these blew up, he would often turn back, crawl into the crater, and roll around for good measure.

Then election day arrived. Clinton deserved to win. She had worked harder than anyone else. She had studied harder than anyone else. She had paid her dues. Almost every newspaper in the country endorsed her. Even Trump expected her to win. And then, after all those decades of work, she didn’t. Can you imagine making that concession call to Trump? That must have been one of the most painful private moments in modern American political history.

Understandably, Clinton disappeared after that. She was spotted walking in the woods. But otherwise she was gone. A great American. A tireless public servant. She deserved her rest. She should have taken it.

But, Hillary Clinton is back. She is organizing. Friends report she is interested in becoming the Mayor of New York. I have no doubt she would be a dramatic improvement on the piece of boiled celery currently occupying the office. Nonetheless, she needs to let it go.

Likewise, her daughter Chelsea is stepping up too. She has a new book out. She coyly rules out running for office “right now”, but Democrats are already mooning over the idea of putting her in Hillary’s former Senate seat. Chelsea also needs to walk away.

One of the fundamental principles of liberal democracies is that everyone should be judged on their merits, and not by their family connections. It’s an obvious point, but an important one. Ivanka Trump and Jared Kushner have no business sitting on a condo board, let alone in the White House. It’s hard to make that point, though, when you are also suggesting Chelsea Clinton would be the best candidate for one of New York’s Senate seats.

But there is a bigger issue here. By every measure, American politics have never been more polarized. We have reached (hopefully) the nadir of a long slow slide that began at Watergate, and separated Americans into two tribes, red and blue. This is not the time for another Democratic blue blood. The party and the country both need a new generation of leaders with new ideas, and an ability to build new coalitions. Chelsea and Hillary are not those leaders.

If either of them want to perform one last act of public service, they should find someone new to mentor. Someone with a new voice. A young woman whose father was not president, perhaps.