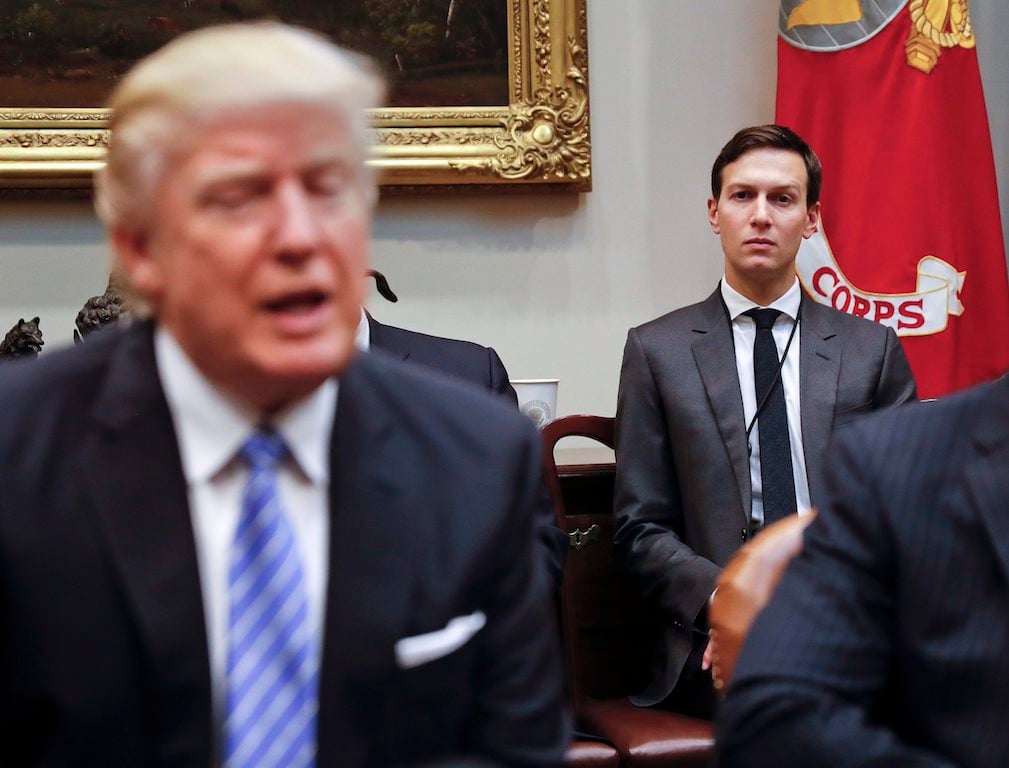 In this Jan. 23, 2017, file photo, White House Senior Adviser Jared Kushner listens at right as President Donald Trump speaks during a breakfast with business leaders in the Roosevelt Room of the White House in Washington. Kushner has been a power player able to avoid much of the harsh scrutiny that comes with working in the White House, but he’s found that even the president’s son-in-law takes his turn in the spotlight. (AP Photo/Pablo Martinez Monsivais, File)

They were in the Persian Gulf on Tuesday and expected to be in Israel on Wednesday, the official said. They were planning to meet separately with Israeli Prime Minister Benjamin Netanyahu and Palestinian President Mahmoud Abbas on Thursday.

The official was not authorized to publicly discuss the private meetings and spoke on condition of anonymity.

The three were expected to meet leaders from Saudi Arabia, the United Arab Emirates, Qatar, Jordan and Egypt during their trip.

Kushner, Greenblatt and Powell have been heavily involved in a behind-the-scenes process to help Trump broker peace between the Israelis and Palestinians, which the first-year president has called the “ultimate deal.”

The talks this week are aimed at helping forge a path to substantive peace negotiations, but no major breakthroughs are expected.

Trump has not outright endorsed the two-state solution, which has been at the heart of U.S. policy for nearly two decades.

The president has urged Israel to show restraint in settlement construction but not demanded a freeze, disappointing the Palestinians. Trump also pushed back a decision on his campaign pledge to move the U.S. Embassy from Tel Aviv to Jerusalem. Israel has welcomed the promise, while the Palestinians have strongly opposed it.