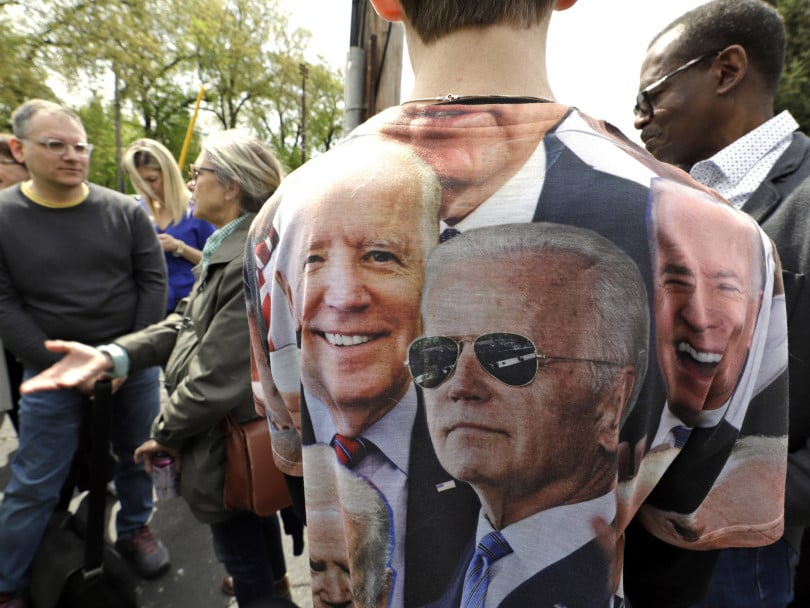 Mason St. Clair of Niles, Ohio, waits in line wearing a short featuring photos of Joe Biden before a rally at a Teamster Hall in Pittsburgh (Gene J. Puskar/AP)

The most important woman in American politics was working the till. Half a dozen customers were in the queue to check out of the Busy Beaver hardware store and garden centre in Lawrenceville and the cashier—a white woman, older than 40, named Audrey Stokes—processed each of them with a quip and a smile and when one man in a University of Notre Dame ball cap came up with a three-metre segment of copper pipe, she asked him, “Are you going to up the street to listen to Joe Biden?”

The Busy Beaver in Lawrenceville served one of the up-comingest neighbourhoods in Pittsburgh, Pa., a solid-brick, store-front, street-level district, formerly derelict, that had been revivified with tattoo parlours and craft-vodka distilleries and candle shops and Impossible Burger cafés and other essentials of the under-40, plaid-shirt, facial-hair crowd. To the north was the Allegheny River and to the south was a big old graveyard with a sign advertising the upcoming Memorial Day pageant that said, “Follow the Parade into the Cemetery,” which, eventually, all of us will.

The Joe Biden rally—the former vice-president’s official “kickoff” for his third attempt at the nation’s highest office—was being held at the Teamster Temple up the hill from the Busy Beaver. Four hours before good old hair-sniffing, shoulder-rubbing, speech-stealing, white-haired Uncle Joe was scheduled to speak, the union hall already was being surrounded by hundreds and hundreds of Keystone State Democrats of all ages, sizes, orientations, affiliations and stations of affluence; yet only two of them whom a reporter noticed within three blocks of the Temple were anything but white. Firefighters, electricians, truckers both long- and short-haul—all were people of colour, if the colour was pink.

RELATED: Seven signs Joe Biden is gearing up to run for U.S. president

It had been 30 years since Joseph Robinette Biden Jr., an Irish-American Pennsylvania plebian with a patrician name, first made a run for the White House, and 30 years since he crashed in flames after delivering a stirring oration—“Why is it that Joe Biden is the first in his family ever to go a university? Is it because our fathers and mothers were not bright?”—that was copied, virtually word for word, from Neil Kinnnock, the British Labourite.

In 2008, Biden—by then a U.S. senator from pipsqueak, tax-free Delaware for more than three decades—tried again, eked out less than one per cent of the vote in the Iowa caucuses, dropped out, declared that he would be “nobody’s vice-president,” and then became Barack Obama’s vice-president. (Biden sat at the right hand of Obama for eight years, but, sadly for Joe, Barack’s a lefty. He has declined to endorse his Number Two.) Now Uncle Joe was on the trail again at the age of 76, following the parade either into the political cemetery, or into the Oval Office with the real power he so long has hungered for.

In his way, however, stood Audrey Stokes in her red Busy Beaver polo. Three years ago, Audrey had been one of the tiny plurality of white women who voted for Donald John Trump over Hillary Rodham Clinton, one of the Pennsylvanians who put The Donald over the top by a stubby fingernail. The statistics in this state were hair-raising:

The mathematics meant that, everything else being equal, front-runner Joe Biden—or any of the two dozen Democrats running against him for the Democratic nomination—will have to somersault only 22,146 ½ Pennsylvania voters out of six million to her or his side to take 20 electoral votes away from the current president. A similar hair’s-breadth flip in Wisconsin and/or Michigan will terminate the Trumpian epoch, no impeachment necessary.

What made Audrey Stokes so important, 17 months and two Pirates World Series championships (unlikely) away from Election Day, was that she was considering becoming one of those 22,146 ½. She had chosen Trump in 2016—she was soft-voiced when she admitted this, given all the Biden boosters within earshot—but now she was eager to hear what Uncle Joe was going to say, and maybe he could win her vote this time. Maybe.

“Donald Trump,” Audrey said, “is a disgusting human being, but he’s done a lot.”

“I don’t like his brattiness,” she went on. “The really childish things he has done—the tweets and the name-calling—he’s supposed to be the president of the United States, but he’s really just a spoiled brat. He grew up with money, and the ones that grow up with money, they’re all like that.”

No one ever accused Joe Biden of growing up rich. He had spent his career being—or posing as—an average Joseph, avatar of turnpike wheelmen and single Moms, and this is going to be his theme for as long as the campaign will carry him: the champion of the middle class, even as the American classes fracture into super-rich and indigent, stock options and ghetto gunfire, craft vodka and fentanyl.

Joe Biden had buried a wife, a baby daughter and adult son. Audrey Stokes had lost a son and a brother to heroin. She understood the Veep’s big, aching heart, and measured her own anguish against the promises, whole and empty, that all the politicians promise, come November, every year. “Nobody can stop it,” she said of the killing drugs. 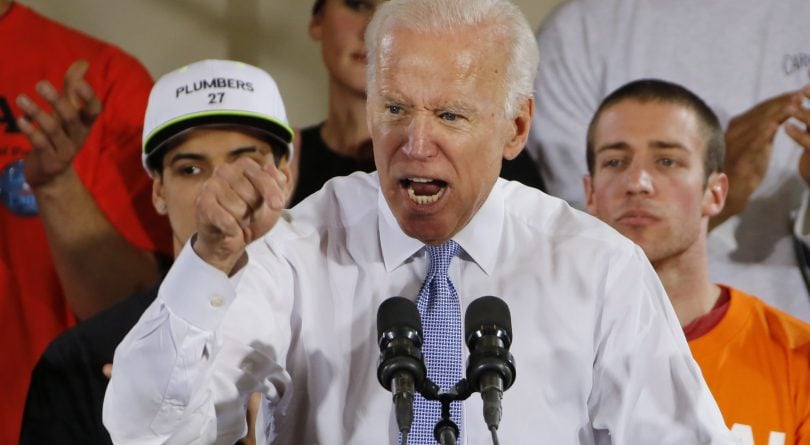 Terri Bruner understood as well. She was selling pennants and buttons out on Butler Street–F*CK TRUMP was her biggest seller. She said, “I told my mom that Trump’s going to win again and she said, ‘Bite your tongue!’ But I go to all the rallies. I went to Bernie Sanders in Wisconsin—he got maybe three hundred people. I’ve seen them lined up three miles long to see Trump. I was in Green Bay on Saturday with Trump.”

“How big was the crowd?” a reporter wondered.

Of all the white women and men who inhabit the unlit barrens between Manhattan and Malibu, many are union members, and now these were assembling at the Teamster Temple in Lawrenceville. Two of them were Nancy Stinner and Dan Fleet, a wife and husband who drive snow plows and sand trucks up and down Pittsburgh’s little Everests during the 10-month winters.

“We actually met at the Temple,” Nancy said. “My future ex-husband introduced us.”

“Why Joe Biden?” a correspondent asked the couple.

“We’re getting beat to death by the politicians,” Dan said. “We’ve got to support the ones who support us.”

RELATED: Kamala Harris’s father is slamming her for making a ‘travesty’ of her Jamaican heritage

“But a majority of white women voted for him last time,” she was reminded.

“I don’t understand it,” he shrugged.

As if on cue, a box truck came down Butler Street and the driver leaned out of the window and hollered, “Creepy Uncle Joe!”

“Trump’s a buffoon and he just tweets stupid stuff and he’s an a–hole,” Nancy Stinner said. “I’ve seen the news clips of Joe rubbing women’s shoulders and putting his arm around people, and it’s not a sexual thing. It’s not like he’s grabbing asses.”

It was a gorgeous spring afternoon in the most important state in the craziest contest for office that a cartoonist could concoct. The 2020 primary of 2019 was coming down to Lawrenceville and the union women and men who had crammed into the Teamster Temple were shouting, “We want Joe!” for a man who was born in the autumn of Guadalcanal and Tobruk and Stalingrad, who had paid his dues of grief and loss.

“We are in a battle for America’s soul,” Joe Biden said, taking the Temple stage.

“If I’m gonna beat Donald Trump in 2020,” he added, looking straight at all the Audreys of Pennsylvania, “I’m going to have to do it here.”