Joe Biden takes the oath: 'I get it'

Paul Wells: Biden offered Americans not so much a program or a faction, but mostly just his person—and he now has multiple crises to tackle 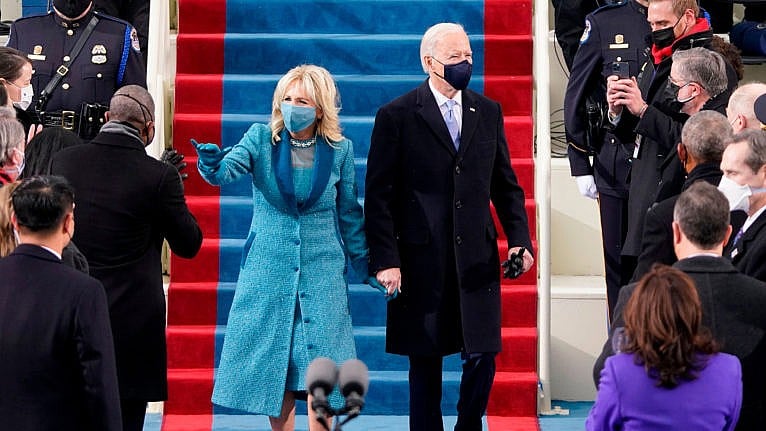 Biden flanked by his wife Dr. Jill Biden arrives for his inauguration as the 46th U.S. President on Jan. 20, 2021 (Patrick Semansky AFP/Getty Images)

They said on the TV that in the days before he took the oath, Joe Biden kept taking back the text of his inaugural speech from the professional writing team, led by Vinay Reddy, who seems good at his work and will be worth watching. Biden would hardly have been the first to do that. It’s often bad news. It can suggest a politician is worried his words won’t meet the moment, so he keeps trying to puff them up. But the speech Biden finally delivered, several minutes ahead of schedule in a ceremony driven by crisis to be simple and brisk, seemed to have undergone a very different process of revision. Not much fancy rhetoric survived. Biden had instead pulled the text closer to him. Like an old coat, for comfort.

“Look, I understand that many of my fellow Americans view the future with fear and trepidation,” he said. “I understand they worry about their jobs. I understand, like my dad, they lay in bed at night, staring at the ceiling, wondering, ‘Can I keep my health care? Can I pay my mortgage?’ Thinking about their families. About what comes next. I promise you, I get it.”

It’s what Biden offered Americans from the start of his third campaign for the presidency: not so much a program or a faction, but mostly just his person. Recent Democratic presidents before him were dashing eggheads, a Rhodes Scholar, a Harvard Law Review man. Joe’s a plodder. He’s grieved and worried and screwed up in his life, often in front of the whole country. His dad worried about the mortgage and his mom told him to stand in the other person’s shoes, and they left him a family Bible as big as a bar fridge that he put his hand on when he took the oath.

It’s “a sacred oath before God and all of you,” he said. “I will defend the Constitution.” Many watching—”all my colleagues I served with” in the Senate—had sworn their own oath to do the same thing, and instead got caught up in other business two weeks earlier. Biden offered a stern reminder: “Each of us has a duty and responsibility, as citizens, as Americans—and especially as leaders, leaders who have pledged to honour our Constitution and protect our nation—to defend the truth and defeat the lies.”

Was there an echo of Lincoln in the repeated reference to a sacred oath? “You have no oath registered in Heaven to destroy the government,” the greatest president had said 160 years ago in his own first inaugural address, “while I shall have the most solemn one to ‘preserve, protect and defend’ it.” It’s plausible that the echo was intentional. Lincoln was clearly on Biden’s mind. He appealed to “our better angels” and mentioned slain soldiers who’d paid their “last full measure of devotion.” He name-checked Lincoln once—unattributed quotes did get Biden into trouble once, half a lifetime ago—for putting his “whole soul” into the Emancipation Proclamation. Now Biden will put his whole soul into what lies next.

To the extent the speech had a structure and presented a program, both had been telegraphed by the incoming president’s communications team for days. America faces four connected crises, they said, and Biden must tackle them all at once. The four are COVID-19, a shaken economy, racial injustice and climate change. Each alone would test any president. But now Biden added a fifth crisis to the list, one that had forced its way onto the national agenda where he stood, two Wednesdays earlier: “a rise of political extremism, white supremacy, domestic terrorism that we must confront and we will defeat.”

He was not shy about admitting he’ll need help with all these messes, help from every American willing to give it. In fact it was a central theme. “On this January day, my whole soul is in this: Bringing America together, uniting our people, uniting our nation.”

It’s a tall order. Within hours he would set to the substantive work, in a new office not far from the one he occupied from 2009 to 2017. He will be busy, as anyone hoping to work with him—say, in a capital city to the north—will do well to remember. He’ll be interested in concrete support from allies willing to shoulder real burdens, less interested in fair-weather friends. He just won’t have time. Potential suitors should govern themselves accordingly.

A few notes on the rest of the ceremony. That Kamala Harris took her oath from Sonia Sotomayor of the Supreme Court, a trailblazer and another trailblazer, was note-perfect. It will be fascinating to see the role the new vice-president defines for herself, working with a president who recently occupied her office.

The choice of Garth Brooks to sing was highly symbolic. He’s a Republican, so it took grace for Biden to invite him and guts for Brooks to accept. The big-tent symbolism was obvious and welcome.

Finally, go Amanda Gorman, go. The Youth Poet Laureate of the United States, resplendent in a canary-yellow coat and impeccably prepared for her moment, performed a poem whose ambition and dizzying complexity of internal rhyming will make it an object of study by bright schoolkids for years to come. Gorman’s impudent virtuosity puts her solidly in the American tradition of Charlie Parker, Michael Jordan and, I don’t know, Herman Melville or Ella Fitzgerald more than it reflects the solemnity of earlier inaugural poets. Another man on today’s inaugural platform went far by talking about the audacity of hope. Amanda Gorman brought it and showed a weary nation what it looks like. Not a bad day’s work.