Just like that, the 'Do Nothing Dems' pass the USMCA

Thursday's bipartisan gush of adulation for Trump was enough to make you wonder: didn't they impeach this guy last night? 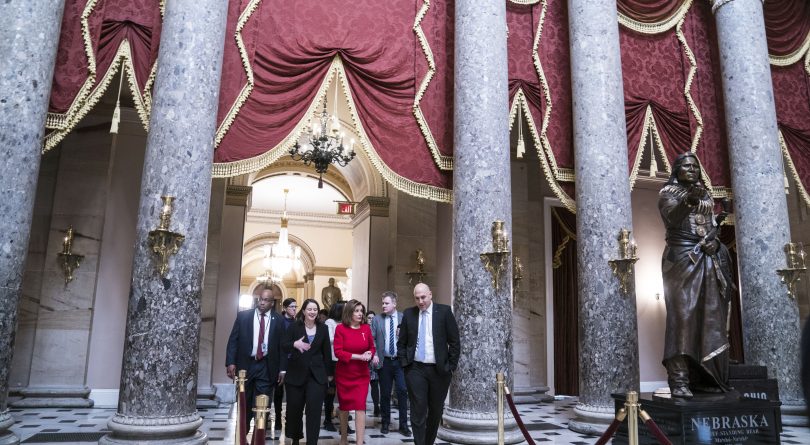 As if Wednesday never happened, as if no one had voted to impeach, inhume and abolish the apoplectic capo of the American republic, as if a great fog of cannabinoid bliss had wafted over the U.S. Capitol, Democrats and Republicans skipped hand-in-hand to the podium of the House of Representatives on Thursday and sang, “Thank you, President Trump.”

The metamorphosis had taken less than a dozen hours. Where, by night, Speaker Nancy Pelosi and her farmhands had cast the 45th president as a deranged dotard, now, in full sunlight, the same lawgivers were commending the same satanic spawn as an architect of industrial prosperity, agricultural bounty, and 110 per cent employment.

“I am seeing today the righteousness of the members of this House,” a delegate from Chicago said, encapsulating the transformation.

“Today is a celebration,” said a representative from South Dakota. “Today brings with it a bounty of benefits to a multitude of winners.”

“It’s a huge victory for the president of the United States,” boomed the much-vilified Rep. Steve King, the proudly Caucasian congressman from Iowa. “We are happy, we are delighted, we are thankful to have this Christmas present coming to us. We say Merry Christmas, Mr. President.”

They all were gushing, of course, about the new NAFTA, which finally passed Pelosi’s pasture on Thursday afternoon with massive bipartisan support and only a trickle of opposition, most of it out of concern that the Mexican government will simply ignore the labour and environmental protections it agreed to earlier this month.

Reps. Alexandria Ocasio-Cortez, Ilhan Omar, and the prophetic Rashida (“We’re gonna impeach the unprintable!”) Tlaib voted against the United States Mexico Canada Agreement (USMCA), of course, but look who lock-stepped in support: Reps. Adam (“Shifty”) Schiff and Maxine Waters for the Democrats; leaders Kevin McCarthy and Steve Scalise for the Grand Old Party. The vote was 385 to 41, with the Senate still to pass final judgment on what will be a signature accomplishment for the president, should be remain in office long enough to enjoy it.

RELATED: The USMCA explained: Winners and losers, what’s in and what’s out

Even the speaker herself tossed the president a bone. (Ruminant meat and bone meal is a $30-million annual export from the U.S. to Mexico and thus is included in the deal.) She patiently had incubated the USMCA for months while pressuring the Mexicans to allow American inspectors into their maquiladoras.  The fact that the passage of NAFTA 2.0 is due principally to the machinations of Pelosi and labour-lord Richard Trumka is unlikely to be mentioned by The Donald on his Magical Hysteria Tour of the hustings. But brag about it, he certainly will.

“The president is going to campaign that he got rid of the worst trade deal in history and cite this as a victory,” a Maclean’s reporter suggested to Pelosi on Thursday morning in the Capitol basement.

“I don’t care about that,” the Speaker of the House replied.

Robed in violent scarlet after her sombre black ensemble of the night before, soft-voiced, and seemingly having no need of sleep, the 79-year-old San Franciscan took the same message upstairs to the floor of the House.

“I was just asked this question—‘Aren’t you giving the president a victory to boast about?’ I said that would be a collateral benefit. If we can come together to support working families and the president wants to take credit, so be it.”

Madame Speaker was all cheerfulness on Thursday, telling reporters that “it seems like people have a spring in their step … I have a spring in my step,” and this after spending weeks professing (or faking) solemnity and sadness as she and her team inserted the I-word into the first sentence of Donald Trump’s obituary—and her own.

And she was holding another potential gift for the president—taking her sweet time in forwarding Trump’s impeachment to the Senate for trial, waiting, she said, until “we see what they have.” Leaders Mitch McConnell, Republican of Kentucky, and Chuck Schumer, Democrat of New York, were reported to be meeting late Thursday to hammer out ground rules for the Senate phase of the inquisition.

In 1998, Senators voted 99-0 for a folio of procedures to govern Bill Clinton’s trial. As the 2020s begin, you couldn’t get 99 of them to agree that the White House is white. The president seized on the Speaker’s delay as more evidence of his victimhood.

“Pelosi feels her phony impeachment HOAX is so pathetic she is afraid to present it to the Senate, which can set a date and put this whole SCAM into default if they refuse to show up! The Do Nothings are so bad for our Country!” Trump tweeted in gratitude on Thursday.

Still, thanks to the Do Nothings, free trade was the order of the day. This was reinforced when the U.S. Department of Agriculture’s “live tariff tracker” pushed out a list of trading partners that included Nicaragua, Panama, Costa Rica, Colombia, and—wait for it—Wakanda, with U.S. exports to include “live sheep, live goats, live mules and hinnies, live purebred breeding cattle, live turkeys, live ducks, live guinea fowl, and live asses.”

Wakanda, of course, is Marvel Comics’ fictional, East African home of the Black Panther and his fellow heart-shaped-herb-eaters. How many dead asses there are at the USDA after this training web site inadvertently was made public was not known at press time.