Allen Abel in Washington: As the storm clouds close in on the White House, the U.S. president lashes out—at Canada, Mexico, Congress and immigrants 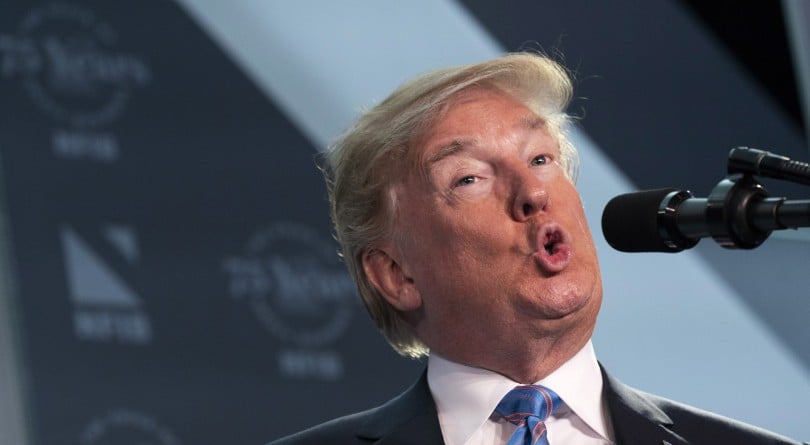 There really was a king named Donald once; in fact there were two of them, their reigns separated by a century, sovereigns over the Picts and the Scots about 1,000 years ago. Whether the first of them ever uttered the words “I alone can fix it,” or whether he ever vowed an end to “this Caledonian carnage,” we do not know. But this real King Donald certainly met a sanguinary end himself—unable to cadge a deferment from military service, he fell in battle against the invading Danes.

A millennium later, we don’t know whether the medieval Donald ever sat down for a one-on-one summit with King Canute of Denmark, or if he loudly promised that his country’s forgotten crofters would be forgotten no more. What we do know is that, according to the chronicle known as the Prophecy of Berchán, the king was known in his own time as Donald the Madman.

“He was described as wanton and you get the sense of a playboy prince,” one reads in a book called Undiscovered Scotland, “a younger son who never expected or perhaps even wanted to become king. He only reigned for five years.”

There is no way of knowing whether Donald the Madman’s progeny eventually would include a fisherman’s daughter from the Isle of Skye named Mary Anne MacLeod. But we do know that this young woman would escape the soot-black certainties of Stornoway in 1930 and make her way, alone, to the United States of America, sailing into New York Harbour aboard the S.S. Transylvania beneath Liberty’s shining torch. Later, Miss MacLeod, a self-described “maid and domestic,” would marry a German-American hut-builder (he would lie and say they were Swedes) named Frederick Christ Trump.

Now on a hot, thundery June day in 2018 and we are outside Mary’s son’s White House, waiting for a real king.

The political temperature exceeds the meteorological. The U.S. capital is inflamed by images of tiny children from tiny countries screeching for their mothers who have struggled or been smuggled on rafts across the Rio Grande. Politicians and politicians’ wives of both parties weep for the orphans.

“The United States will not be a migrant camp,” Trump retorts—as if it has not been exactly that for more than 200 years, as if it was not a refuge for his own mother, for his own grandfather. For this stance, he is hailed by a reported 55 per cent of registered Republicans and abjured by almost everyone else—Ted Cruz, Mitt Romney, John McCain, even the evangelical Faith and Freedom Coalition!—as a latter-day Donald the Madman.

“One touch of nature makes the whole world kin,” William Shakespeare wrote. And what is more of nature than a crying, frightened child?

On this Tuesday, Mary MacLeod Trump’s second boy—a younger son who never expected or perhaps even wanted to become king?—has just come from a speech to the Federation of Independent Business in which he has bragged that “Main Street is thriving, and America is winning once again. You know we are respected again. This country is respected again.”

“There was a story two days ago, in a major newspaper, talking about people living in Canada, coming into the United States, and smuggling things back into Canada because the tariffs are so massive. The tariffs to get common items back into Canada are so high that they have to smuggle them in. They buy shoes, then they wear them. They scuff them up. They make them sound old or look old.”

“No, we’re treated horribly. Dairy. Dairy. Two-hundred and seventy-five per cent tariff. So basically that’s a barrier without saying it’s a barrier. And I told them, if they don’t change their ways—and we have a tremendous deficit. People say, ‘Well, there’s really not that much of a deficit.’ Well, they’re not including two things: energy and timber. And those are the two big things when it comes to Canada.”

“We have to change our ways. We can no longer be the stupid country. We want to be the smart country.”

At the small-business event, the royal attention turns to the children on the southern frontier. King I-Alone has mutated into a helpless chattel of a fractured Congress; only they can calm the televised mewling of the babes. He demands that the legislature give him:

“The legal authority to detain and properly remove families together as a unit. We have to be able to do this. This is the only solution to the border crisis.”

“We have one chance to get it right. We might as well get it right, or let’s just keep it going. But let’s do it right. We have a chance. We want to solve this problem. We want to solve family separation. I don’t want children taken away from parents. And when you prosecute the parents for coming in illegally, which should happen, you have to take the children away. Now, we don’t have to prosecute them. But then we’re not prosecuting them for coming in illegally. That’s not good.”

Boot mothers and children out together: that would be a gooder way.

“Child smugglers exploit the loopholes, and they gain illegal entry into the United States, putting countless children in danger on the perilous trek to the United States,” Trump argues. “They come up through Mexico.  Mexico does nothing for us. You hear it here: They do nothing for us. They could stop it. They have very, very strong laws. Try staying in Mexico for a couple of days. See how long that lasts. Okay?”

Back at the White House, it is time for the daily dosage of pomp. Rolling toward the South Portico is the limousine of Felipe VI of Spain, blood descendant of Isabella and Ferdinand, the funders of the voyages of Christopher Columbus and the progenitors, in a sense, of the tens of millions of destitute, desperate Latin Americans who, despite everything, continue to parade ever-hopeful toward the United States.

The King of Spain, who is tall, though not quite Jim Comey tall, but still taller than Donald Trump, elongates himself out of the Cadillac, and he poses for photographs with America’s First Couple and with his Queen Letizia, who used to be a correspondent for Fake News CNN.

We all crush into the Oval Office, where King Felipe, who attended Lakefield College School in Ontario and Georgetown University here in D.C., is seated next to the bust of the Reverend Dr. Martin Luther King and talking about “our common history, our heritage. So many years that we share. … So many issues of common interest… as well as there is one basic common issue, which is our value for democracy.”

(That, and Trump’s proposed 34.7 per cent import duty on Spanish black olives that has everybody pitted against Trump in Toledo and hopping mad in Madrid.)

Outside, the thunder rumbles, drowning out the babies’ cries. In Spain, the rain may stay mainly in the plain but in King Donald’s Washington—politically, and from a petulant heaven—it is coming down in sheets.