Image of the week: The U.S. veep visibly squirmed as he swore in America's first openly bisexual senator. But he kept his sense of humour 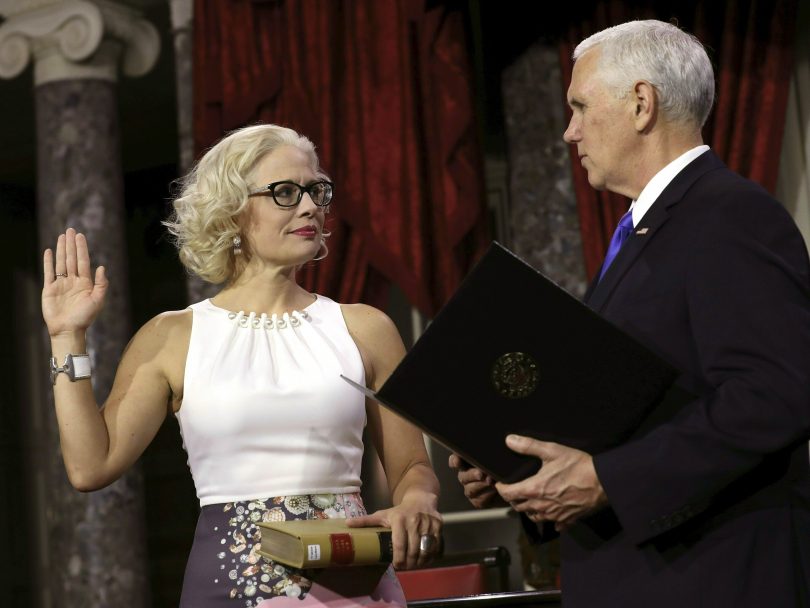 The race to replace Arizona senator Jeff Flake was one of the tightest in the United States’ recent midterm elections. Democrat Kyrsten Sinema, a bisexual atheist Ironman triathlete and popular three-term congresswoman, faced Republican Martha McSally, a pro-life Air Force veteran who made history as the first woman to fly in combat in 1991. The race was so close that Arizona election officials needed almost a full extra week to count every ballot, prompting right-wing conspiracy theoriests to cry voter fraud. (President Donald Trump got wind of this, tweeting, “Just out – in Arizona, SIGNATURES DON’T MATCH. Electoral corruption – Call for a new Election? We must protect our Democracy!”) Sinema ended up winning by a clear margin, becoming not just Arizona’s first female senator, but the Unites States’ first openly bisexual one. This week, Vice-President Mike Pence, a devout Christian who has long fought against LGBT-friendly laws, swore her in, her left hand placed on a law book rather than the conventionally used Christian Bible. The moment was rife with poetry and pleasantries, a remarkably civilized encounter of two warring ideologies. “It’s very humbling,” Pence quietly said to Sinema. “More than I could tell you.” Maybe he was in a good mood because of the story’s postscript: McSally wound up being appointed to fill the late John McCain’s Senate seat, becoming the second-ever female senator for Arizona, literally hours after her rival became the first.