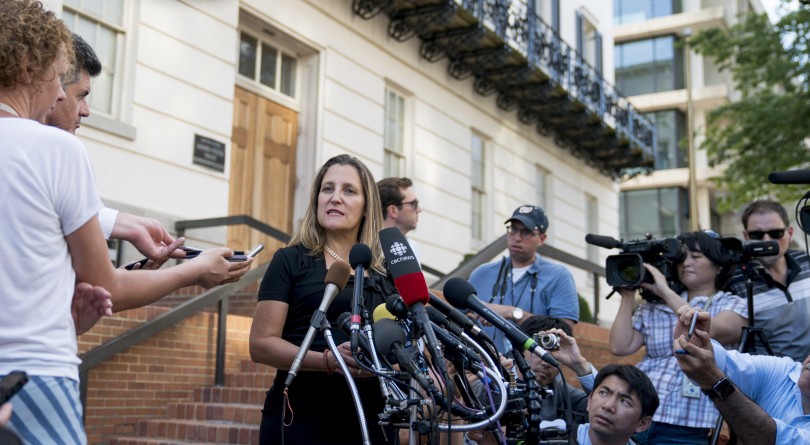 Canada's Foreign Affairs Minister Chrystia Freeland speaks to the media as she arrives at the Office of the United States Trade Representative, Wednesday, Aug. 29, 2018, during trade talks in Washington. (AP Photo/Andrew Harnik)

When it comes to describing trade negotiations, the words “pressure” and “heat” get thrown around interchangeably. But, when you think about it—and there was ample time to ponder outside Thursday’s marathon NAFTA talks between the U.S. and Canada in Washington—they carry subtly different meanings.

Pressure suggests a general condition. So, there’s pressure for Canada and the U.S. to arrive at a deal as early as today, following U.S. President Donald Trump’s surprise announcement at the start of this week of a bilateral understanding with Mexico. But heat draws attention to its own source. It’s Trump who has put the heat on Justin Trudeau by threatening to press ahead with Mexico alone, cutting Canada out.

Or maybe I’m just obsessing over temperature after spending many hours during a D.C. heat wave with other reporters camped outside Canadian Foreign Minister Chrystia Freeland’s bargaining sessions with U.S. Trade Representative Robert Lighthizer. They were hunkered down with officials not far from the White House, inside the venerable Winder Building, which was a key Union Army headquarters during the Civil War, and has been the site of many hot negotiations since 1981, when the USTR moved in.

Freeland emerged at intervals yesterday to say such things as, “This was another good, constructive, productive conversation.” The closest she came to more evocative language was when she offered, “We’ve moved into a very intense rhythm of the negotiations, where our officials are working hard preparing issues for some high-level ministerial decisions.” She also gave journalists a bag of popsicles. To which one’s first thought was, media sympathy isn’t so easily acquired. And the second, any lemon-lime in there?

But Freeland’s bid to lighten the mood melted away in no time. Too much heat from too many sources. Back in Canada, for instance, that Federal Court of Appeal’s decision stalled the Trudeau government’s Trans Mountain pipeline expansion. Freeland said that didn’t affect the NAFTA talks, as of course it wouldn’t—not directly. But the need for the Liberals to secure a win on a major economic file suddenly became that much more acute.

And achieving a win in Washington depends on resolving a very few impactful issues. To recap, the Mexicans changed everything by moving on Trump’s core concern about U.S. auto jobs, crucially agreeing that 40 percent to 45 per cent of a vehicle’s value had to be made in plants paying $16 an hour or more, which would benefit the American and Canadian auto sectors, but pose a challenge for the lower-wage Mexican auto sector.

That leaves Freeland to grapple with other Trump demands. Perhaps thorniest among them is his desire to do away with NAFTA’s Chapter 19 dispute-settlement rules, which have historically helped Canada fight U.S. duties, notably on softwood lumber. Among experts coolly watching the trade talks from outside, speculation swirls around the possibility that to salvage something on dispute-settlement, Ottawa might offer the U.S. more of the access Trump wants to Canada’s tightly protected dairy market.

Even quasi-insiders, however, don’t really know details about what’s transpiring at the bargaining table. Hassan Yussuff, president of the Canadian Labour Congress, sits on the Liberal government’s NAFTA council. But when Yussuff  passed by the Winder Building yesterday, he didn’t profess to having any special info on what was happening inside. In fact, he noted that even on the already announced U.S. side deal with Mexico, important details remain unclear, including how higher labour standards on Mexican auto makers would be enforced.

Still, Yussuff’s central worry wasn’t with what the U.S.-Mexico talks produced, but what might still be to come, perhaps as early as today, on dispute settlement. “Chapter 19 allowed us to find a way to resolve our disputes with the United States in a way that is equitable and fair,” he said. “In the absence of that, all the products that my members make that come into the United States are going to be impacted.”

That intense rhythm Freeland alluded to is set to resume here today. It’s maintained typically by a mix of five to 10 officials and political staff in a conference room at any given time. Now and then, Freeland and Lighthizer also meet one-on-one in his office. Along with technical experts, top-level political players are also on hand, including Gerald Butts, Trudeau’s principal secretary, and Jared Kushner, Trump’s son-in-law and one of his senior advisers.

It’s supposed to be a little cloudier in Washington today, the temperature not quite so high. But if heat no longer serves as such handy descriptor, storms are in the forecast.