Let's change the way we talk about inner cities

While Donald Trump is far out of his depth on the finer points of America’s racial divides, he is far from the only politician informed by the mythologies of yesteryear 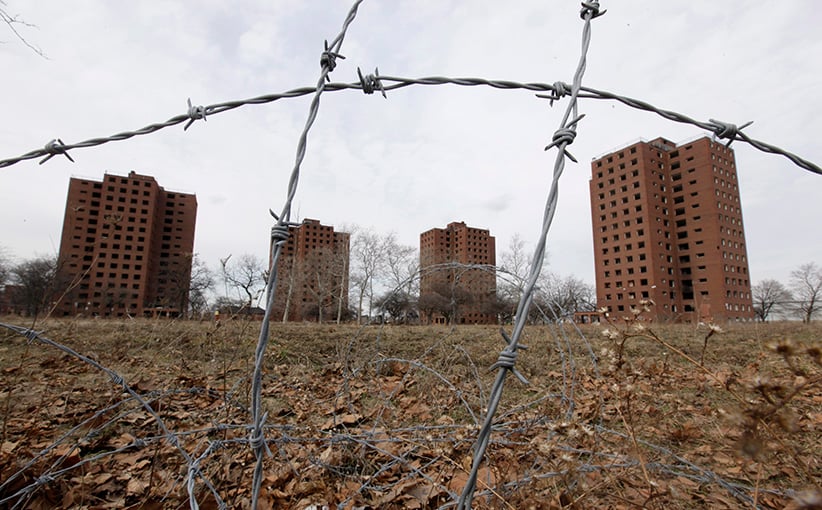 Part of the Brewster-Douglass housing project site is shown in Detroit. (Paul Sancya/AP)

In the second presidential debate of 2016, an undecided Black voter took the microphone to ask candidates Hillary Clinton and Donald Trump whether they believe, if elected president, they can be devoted to all the people in the United States. Carter, a middle-aged and lawyerly Black man, deepened his voice and heavily emphasized the word “all,” as if to intimate, “I watch the news. Both of you know what I mean.” Then Donald Trump, who has already immolated himself and his disastrous campaign with personal scandals and the now-infamous videotaped Access Hollywood conversation with Billy Bush, proceeded to throw another canister on the fire.

Frustrated debate-watchers immediately lit up social media and news blogs with a barrage of fact-checks. “Trump talking about ‘the inner cities’ is code for ‘lock up as many black folks as I can find,’ ” tweeted the popular social justice activist Deray McKesson, among a chorus of similar messages. Huffington Post, Vox, and other outlets ran explainers on the political economy of “inner cities,” demonstrating that not only was Trump wildly exaggerating statistics on crime and poverty in Black and Latino communities, gentrification in urban centres had mostly rendered America’s concept of the “inner city” extinct. Most racialized groups–Black and Latino Americans especially–have largely left, or been pushed out of metropolitan centres. And crime is far from out of control–in most major cities, and overall across the country, crime rates have been falling steadily since the late 1990s.

While Trump was, as usual, far out of his depth on the finer points of America’s racial divides, he is far from the only politician whose grasp on current realities are informed by the mythologies of yesteryear. Republican House Speaker Paul Ryan has landed in hot water with the Congressional Black Caucus in 2014, after a radio appearance in which he opined on the malaise of Black inner cities: “We have got this tailspin of culture, in our inner cities in particular, of men not working and just generations of men not even thinking about working or learning the value and the culture of work, and so there is a real culture problem here that has to be dealt with.” Even Hillary Clinton has often spoken of “inner city” problems; in her June 2015 campaign kickoff speech, she spoke of easing the transition for “distressed communities,” to a diverse and sustainable economic future, including the “inner city.”

But what is the inner city, exactly? And how did America’s come to be so distressed? In political language, the phrase never has described a geographic region. The poorest Oakland neighbourhoods described as inner city are located uptown, and Chicago’s “inner city,” named by Atlantic writer Ta-Nehisi Coates as “the most segregated in America” in his lengthy study of housing discrimination, is never mentioned without the “South Side” preface. The neighbourhood is distanced in language as much as by its racially engineered demographics. Meanwhile, North America’s urban centres, which came by the name “inner city” in the age of suburban white flight, have been rebranded “downtown cores,” referencing their integral position in the age of urban gentrification. When one considers the “inner city” to be “wherever white residents are not,” the concept takes shape. Wherever Black and Latin Americans are, there the inner city will be.

This is why Trump’s conception of “inner city problems”—spiralling poverty, rampant crime, hopelessness—as well as his vague “law and order” solutions aren’t so much the product of a know-nothing demagogue as they are standard policy in America. The political answer to inner-city problems has, to this day, mostly amounted to disaster capitalism. For example, under Detroit’s “emergency manager” regime, which has been in place since 2013, unelected and unaccountable political appointees have made neighbourhood conditions nearly unlivable for low-income residents. Rather than raise revenues to fix the crumbling infrastructure that’s caused utility bills to skyrocket, the city has overseen the disconnection of water and heat delivery to hundreds of thousands of low-income and unemployed residents who can’t keep up with bills.

Additionally, more than 1,000 residents with up-to-date accounts also had their water shut off, as well as residents of entire apartment buildings whose owners and managers have fallen behind. Meanwhile, delinquent businesses like Joe Louis Arena and Ford Field received no such visits. The intention is clear. “What we’re gonna do is turn Detroit into an Indian reservation,” said the chief executive of nearby Oakland county in a 2014 New Yorker profile, “where we herd all the Indians into the city, build a fence around it, and then throw in the blankets and corn.”

In Ferguson, Mo., where the Black Lives Matter protest movement took root, the U.S. Department of Justice found the city’s law-and-order solutions led to “a pattern of unconstitutional policing.” When coupled with sympathetic municipal courts, the system compounded into a kleptocracy that disproportionately harmed Black residents. A resident unable to pay the fine for a minor offence (for example, failing to wear a seat belt in a parked car), or who failed to appear in court, could find themselves massively indebted when penalty fines piled up, and arrest warrants issued.

The examples are endless—reckless cost-saving measures leading to lead-contaminated water in Flint, Mich.; demolishing Milwaukee neighbourhoods to build an interstate highway; failing to restore nearly 70 per cent of New Orleans public transit in the wake of hurricane Katrina—and they consistently trace back to America’s idea of the inner city, and how to solve its problems. That is: starve visible minority communities of resources, blight their neighbourhoods with disastrous policy, and then answer their call for accountability with handcuffs, if not truncheons and riot shields. Criticizing Donald Trump for his inability to grasp and articulate the simplest of policies is necessary, but his concept of the American inner city has pervaded lawmaking for decades. If the ability to be devoted to all constituents is a requirement for the Oval Office–and you know what I mean–good luck finding a single politician in America who qualifies.