Maclean's Bulldog, Sept. 6: Your daily rundown of what happened today on the U.S. campaign trail 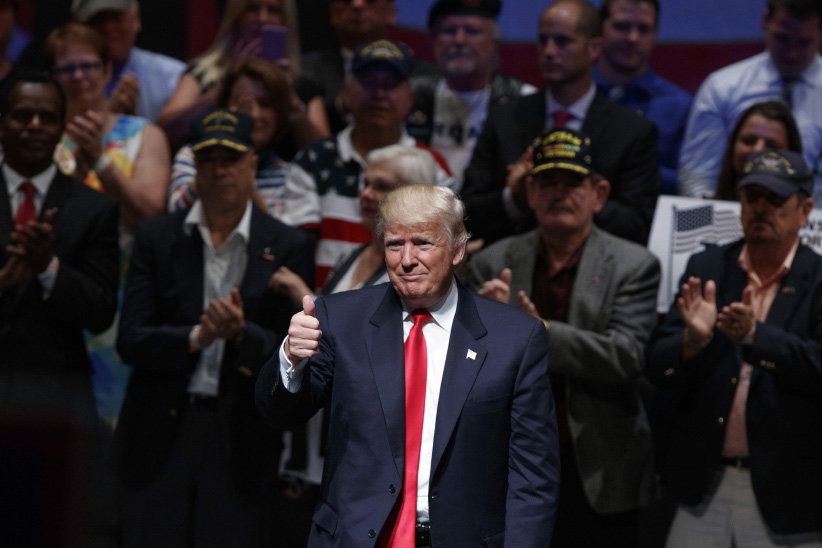 Sept 6, 2016: Our daily Bulldog election-campaign recaps return as the critical stretch of the U.S. election begins Tuesday. Hillary Clinton was in Florida, where she held a town hall to discuss national security—and attacked her opponent’s hubris in once saying he knows more about ISIS than the generals do. Donald Trump, meanwhile, was in another key swing state, Virginia, to talk veterans affairs, buoyed by an open letter of support from 88 retired U.S. generals and admirals, plus a new nationwide poll showing him neck-and-neck with Clinton.

Recommended read of the day

On the theme of veterans and national security, FiveThirtyEight‘s first instalment on voter demographics is on the impact of the military vote: “This Election Is Testing The Republican Loyalties Of Military Voters“

With nine weeks until Election Day, the latest polling numbers from CNN/Opinion Research Corp conducted over the Labour Day weekend have Trump leading Clinton 45 per cent to 43 per cent (with Libertarian candidate Gary Johnson polling at seven per cent). Despite the good news for Trump, polling aggregator and forecaster FiveThirtyEight still has Clinton leading in most key swing states, predicting the Democratic nominee has a 68.5 per cent chance of being elected president.

As is customary with polls of Trump leading, he was sure to tell everyone about it.

For the first time in decades—since 1964 to be exact—the Dallas Morning News will not endorse the Republican nominee for president. The newspaper said Trump is “no Republican and certainly no conservative,” adding his position on free markets, individual liberties, national defence are all at odds with the Republican ideals supported by the news outlet. “Donald Trump is not qualified to serve as president and does not deserve your vote,” the paper’s editorial board wrote.

Trump’s longstanding pledge to make Mexico pay for a border wall could hit yet another hurdle for the Republican nominee. One Mexican politician announced that he plans to introduce legislation making it illegal for or his country to pay for Trump’s proposed wall. But it doesn’t stop there.

According to the Financial Times, Sen. Armando Ríos Piter’s proposed legislation would add that if Trump indeed tears up the North America Free Trade Agreement—as he has threatened to do if elected—Mexico would tear up its 1848 Treaty of Peace, Friendship, Limits and Settlement, which was signed at the end of the Mexican-American War, where Mexico passed on a bulk of its territory to the U.S. In effect, if Trump rips up NAFTA under the terms of the Mexican bill, Mexico would claim back its land—commonly known today as California, Nevada, New Mexico and Arizona.

Another $100 million needed? Pass the hat.

With a little over two months to go, the Clinton campaign set up a fundraising goal of $100 million down the campaign stretch, according to Politico. The report comes just after Clinton’s team announced receiving $140 million worth of donations in August alone. The reason for the cash is to flood the airwaves amid expected non-stop news coverage of Trump in the final weeks of the campaign.

Eighty-eight retired U.S. generals and admirals signed an open letter in support of Donald Trump for president, writing: “For the past eight years, America’s armed forces have been subjected to a series of ill-considered and debilitating budget cuts, policy choices and combat operations that have left the superb men and women in uniform less capable of performing their vital missions in the future than we require them to be. Simultaneously, enemies of this country have been emboldened, sensing weakness and irresolution in Washington and opportunities for aggression at our expense and that of other freedom-loving nations.”

“For this reason, we support Donald Trump and his commitment to rebuild our military, to secure our borders, to defeat our Islamic supremacist adversaries and restore law and order domestically. We urge our fellow Americans to do the same.”

Trump ruffled a few feathers when, months ago, he said “I know more about ISIS than the generals, believe me.” Whether that’s true or not (it’s the latter), many retired generals are willing to stand behind him.

This is getting taxing

Do Americans care about Trump’s tax returns? The Republican nominee doesn’t think so. In an interview aired Tuesday on Good Morning America, Trump repeated that he wouldn’t release his tax returns under audit, adding, “As far as my taxes are concerned, the only one that cares is the press, I will tell you.”

Clinton, meanwhile, promised to not let the tax return issue fade away. “[Trump] said that the American people don’t care about his tax returns. And in fact, he’s also said that it’s none of our business,” the Democratic nominee said on Tuesday. “I just think he’s dead wrong.”

Republican supporter @LeroyDaniel2016 had a simple message for his several thousand Twitter followers:

Message for undecided voters, Please wake up and vote @realDonaldTrump now! Trump/Pence very important save our America before too late!

But when the message of support caught the eye of Trump—a prolific tweeter—the Republican nominee rewrote the tweet for his 11 million-plus followers. And in order to fit the character limit, he edited down Leroy’s Twitter handle and mistakenly gave the quote credit to the user @Ler.

"@Ler: Message for undecided voters: Please wake up and vote DonaldTrump now! Trump/Pence very important save our America before too late!"

Here, a moment of sympathy for @Ler, who suddenly had an inbox filled with thousands of retweets, replies and messages of support and scorn.

Thank you @realDonaldTrump for the unintentional shoutout!

no i did not. he randomly mentioned me for no reason. i haven't tweeted in months. https://t.co/Dve3T9jt71