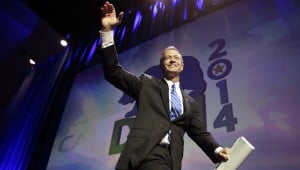 DAVENPORT, Iowa — Former Maryland Gov. Martin O’Malley entered the Democratic presidential race on Saturday in a longshot challenge to Hillary Rodham Clinton for the party’s 2016 nomination, casting himself as a new generation leader who would rebuild the economy and reform Wall Street.

“I’m running for you,” he told a crowd of about 1,000 people in a populist message at Federal Hill Park in Baltimore, where he served as mayor before two terms as governor. O’Malley said was drawn into the campaign “to rebuild the truth of the American dream for all Americans.”

Following his announcement, O’Malley promptly headed to Iowa, where he is seeking to become the primary alternative to Clinton. Before more than 50 people at a union hall in Davenport, he touted his executive experience and called for economic reforms, drawing enthusiastic applause.

“We are still in just as grave a danger of having Wall Street excesses wreck our economy again and there’s not a need for it. When wealth concentrates as it has, it also concentrates and collects power and we have to retake control of our own government,” said O’Malley, who has made frequent visits in recent months to Iowa whose caucuses lead off the state-by-state nominating contests.

O’Malley will appear Sunday in New Hampshire, which traditionally holds the first primary election in the nominating contest.

O’Malley has made frequent visits in recent months to both early voting states. Still, he remains largely unknown in a field dominated by Clinton. Already in the race is Vermont Sen. Bernie Sanders, who could be O’Malley’s main rival for support among Democrats on the left who are reluctant to back Clinton.

An ally of former President Bill Clinton, O’Malley was the second governor to endorse Hillary Clinton’s presidential campaign in 2007. But he says Democrats deserve a choice in the 2016 primary.

He pointed to recent news reports that Goldman Sachs CEO Lloyd Blankfein would be “fine” with either Clinton or former Florida Gov. Jeb Bush, a leading Republican contender and the son and brother of presidents, in the White House.

It was a forceful message that O’Malley will focus on overhauling the financial system, a priority for liberals opposed to the bailouts of Wall Street banks.

Bush is expected to officially announce his candidacy soon, entering a wide-open Republican nominating contest that may draw more than a dozen candidates.

Aides said O’Malley called Hillary Clinton on Friday to tell her he was running. By Saturday afternoon, Clinton had tweeted, “Welcome to the race, Gov. O’Malley. Looking forward to discussing strong families and communities.”

The 52-year-old O’Malley has spoken often about the economic challenges facing the U.S. and said he would bring new leadership, progressive values and the ability to accomplish things.

O’Malley has presented himself to voters as a next-generation leader for the party, pointing to his record as governor on issues such as gay marriage, immigration, economic issues and the death penalty.

Just weeks ago, riots in Baltimore broke out following the death of Freddie Gray, an African-American man who died in police custody following his arrest last month.

A few demonstrators gathered near Federal Hill Park to protest O’Malley’s criminal justice policies as mayor, an office he held from 1999 until his election as governor in 2006. “He’s claiming to be this saviour of Baltimore, but he’s not,” said Duane Davis, who said he is homeless.

O’Malley was known for his tough-on-crime, “zero tolerance” policies that led to large numbers of arrests for minor offences. Critics say it sowed distrust between police and the black community. Supporters note the overall decrease in violent crime during his tenure.

O’Malley could soon be joined in the Democratic field by two other longshots — former Rhode Island Gov. Lincoln Chafee, who plans to make an announcement next week, and former Virginia Sen. Jim Webb, who is exploring a potential campaign.