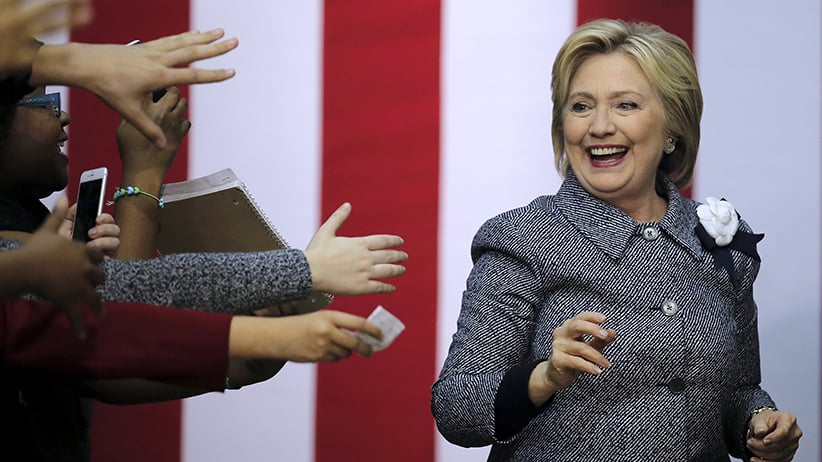 WASHINGTON — The day after high-stakes contests in five states, the math and momentum point to a Donald Trump Republican presidential nomination as GOP officials grapple with whether to embrace the billionaire businessman or rally behind a longshot alternative.

It wasn’t a question for Democrat Hillary Clinton, who took aim at Trump on Tuesday night after strengthening her position against rival Bernie Sanders with another batch of primary victories of her own.

“Our commander-in-chief has to be able to defend our country, not embarrass it,” Clinton said in a speech that largely ignored Sanders. “We can’t lose what made America great in the first place.”

Related: Maclean’s correspondent Allen Abel on what comes next

Clinton triumphed in the Florida, Illinois, Ohio and North Carolina presidential primaries, putting her in a commanding position to become the first woman in U.S. history to win a major-party nomination. Trump strengthened his hand in the Republican race with wins in Florida, North Carolina, and Illinois but fell in Ohio to that state’s governor, John Kasich. Votes were also being counted in Missouri, though races in both parties there were too close to call.

Even before Tuesday’s results, a group of conservatives was planning to meet to discuss ways to stop Trump, including a contested convention or rallying around a third-party candidate. While no such candidate has been identified, the participants in Thursday’s meeting planned to discuss ballot access issues, including using an existing third party as a vehicle or securing signatures for an independent bid.

A person familiar with the planning confirmed the meeting on the condition of anonymity because the person was not authorized to discuss the gathering by name.

Related reading: Trumputin: The disturbing parallels between Trump and Putin

Even House Speaker Paul Ryan, R-Wis., did not rule out the idea of being drafted by the party at the convention.

“People say, ‘What about the contested convention?’ ” Ryan said in an interview with CNBC. “I say, well, there are a lot of people running for president. We’ll see. Who knows?”

With more than half the delegates awarded through six weeks of primary voting, Trump is the only Republican candidate with a realistic path to the 1,237 delegates needed to clinch the nomination through the traditional route.

Kasich prevented a total Trump takeover by denying him victory in Ohio. But after Tuesday’s contests, it’s mathematically impossible for the Ohio governor to win a majority of delegates before the GOP’s July national convention.

“No candidate will win 1,237 delegates,” Kasich’s chief strategist, John Weaver, declared in a post-election memo. He suggested Kasich is well-positioned to amass delegates in the upcoming primary contests to help bolster his position in a contested convention.

Cruz is in better position than Kasich, but he too faces a daunting mathematical challenge after losing four of five contests Tuesday. The Texas senator needs to claim roughly 75 per cent of the remaining delegates to earn the delegate majority, according to Associated Press delegate projections.

With Rubio out of the race, Cruz welcomed the Florida senator’s supporters “with open arms.” The fiery conservative tried to cast the GOP nomination battle as a two-person race between himself and Trump.

On the Democratic side, Clinton’s victories were blows to Sanders and bolstered her argument that she’s the best Democrat to take on the eventual Republican nominee in the general election. Her win in Ohio was a particular relief for her campaign, which grew anxious after Sanders pulled off a surprising win last week in Michigan.

Related reading: How Trudeau would work with a Trump presidency

Clinton kept up her large margins with black voters, a crucial group for Democrats in the general election.

Clinton has at least 1,561 delegates, including the superdelegates who are elected officials and party leaders free to support the candidate of their choice. Sanders has at least 800. It takes 2,383 to win the Democratic nomination.

Trump’s Florida victory brought his delegate total to 621. Cruz has 396 and Kasich 138. Rubio left the race with 168 delegates.

Clinton was more willing than Republican officials to recognize the likelihood of a Trump nomination, warning supporters that the New York real estate mogul has laid out a “really dangerous path” for the country.

Republican voters continue to back Trump’s most controversial proposals, with two-thirds of those who participated in GOP primaries Tuesday saying they support temporarily banning Muslims from the United States, according to exit polls.