Melania Trump finally speaks—and it's with a whispery roar

In an interview with CNN's Anderson Cooper, Melania Trump stayed on message and proved she's a fighter 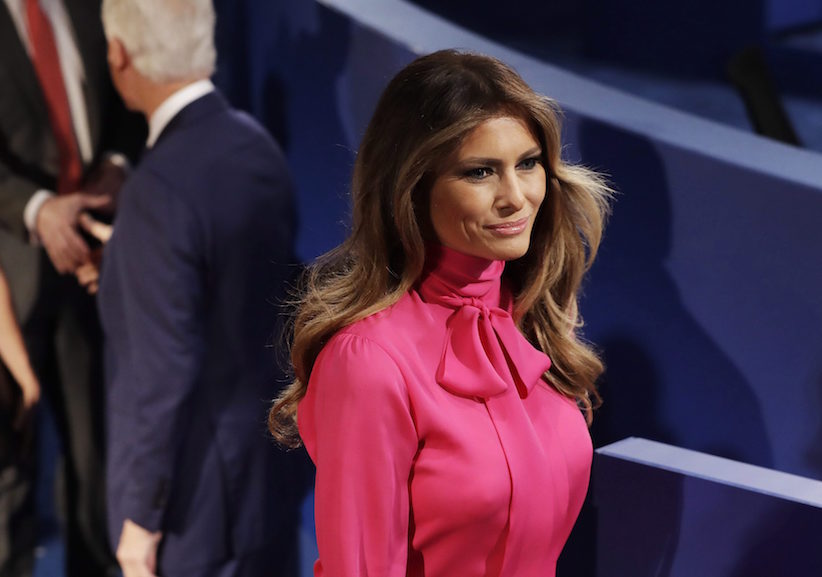 For someone who routinely utters hateful, demeaning statements about women, Donald Trump has benefited mightily from them. His three wives have provided him with five children, including daughter Ivanka, who has served as an “enlightened working mom” proxy on his campaign. As a hotelier and former casino and beauty pageant owner, Trump has profited from women’s pulchritude; they have helped to build his empire, and to boost his ego. And at the second debate, he corralled four female Hillary Clinton foes—three of them alleged victims of sexual assaults by her husband—to try to rustle up a scandal.

But it is a mark of the gutter in which his campaign now lies that he finally was forced to marshal that time-honoured weapon deployed in times of political crisis: the devoted wife. On Monday night, an interview with Melania Trump aired on CNN, a network Trump insists is conspiring against him. She was interviewed by Anderson Cooper who, during the second presidential debate, got Trump to say he’d never sexually assaulted a woman. The Slovenian-born former model also will appear on Trump-friendly Fox News; that interview will air on Tuesday.

As a secret weapon, Melania Trump was stealthily and surprisingly effective—poised, stoic, calm, almost preternaturally serene. Her role model, she has said, is the glamorous, tolerant, and ultimately tragic first lady, Jackie Kennedy. She appeared to be channelling her in a sleeveless white sheath as she lobbed Cooper’s respectful questions with stony eyes, as if playing tennis with an infant. Cooper kept the focus on media and on the sexual assault allegations, failing to venture into the sort of gossipy dish people wanted to hear: Why did she choose to wear that Gucci “Pussy-bow” to the second debate—was it some kind of a sartorial signal? How did she feel after the Republican convention to find out she’d plagiarized Michelle Obama?

Instead, Cooper provided a platform for the woman who met Trump in 1998, married him in 2005 and had their only child, Barron, a year later. In the past, Melania has been depicted as a Real Housewife of Trump Tower. “I didn’t want [my husband] to change the diapers or put Barron to bed,” she once told Parenting.com. During the campaign she’s been portrayed as a displaced figure—uprooted from galas and fashion shows to endure public scrutiny and humiliation on the hustings. Her claim that she held a degree in architecture and design from Slovenia was disproven. The woman who became a U.S. citizen in 2006 had to listen to her husband disparage immigrants and put up with a team so inept as to steal material from the first lady. Now, 12 women—at last count—have come forward to say the man she married assaulted them. She has launched various lawsuits over claims she was an escort and an illegal immigrant. Most recently she has threatened to sue People over a first-person account of one of the sexual assault allegations. (She’s not disputing the sexual assault charges, but the writer’s description of a meeting with her.)

On Monday night, however, Melania Trump—who, at 46, is 11 years past the age women should be traded in, according to her husband on Howard Stern’s show—presented as the perfect Republican wife: traditional yet independent, soft-spoken yet steely. That, or someone who deserves an Academy Award.

“I’m very strong,” she told Cooper. “Don’t feel sorry for me. I can handle everything.” It was her decision to keep a low profile on the campaign trail, so she could tend to their son, she said: “No one tells me what to do.” She came into the political arena with her eyes open, though she didn’t expect media to “be so dishonest and so mean.” She didn’t mention that it’s not her first campaign: In 2000, she appeared with Trump during his unsuccessful bid for the presidential nomination of the Reform Party. In a photoshoot that year for now-defunct Talk magazine, she lay in a red bikini and gold heels on what appeared to be the U.S. Presidential seal in a room mocked up to look like the Oval Office.

After the Access Hollywood tape, Melania issued a statement saying her husband’s words were “unacceptable and offensive to me. This does not represent the man that I know.” She forgave him and hoped the nation would too. On CNN she portrayed her husband as the victim, blaming the show’s co-host, Billy Bush, for egging him on “to say dirty and bad stuff.” (He’s since lost his job.) She was the wilfully blind wife, dismissing their comments as “boys’ talk,” even though her husband was 59 at the time. Her husband can be infantile, she allowed: “Sometimes I say I have two boys at home—I have my young son and my husband.” It’s as damning a statement as can be made about a presidential nominee that was somehow uttered so gently and surely that was rendered benign.

They have a “great marriage,” Mrs. Trump insisted: “We are very strong. We are two independent people.” She excused her husband for trashing the appearance of his accusers: “My husband is real, he’s raw, he tells it like it is,” she said. She tried to sell him as a feminist: “He is kind, he supports women, he employs many many women.”

Throughout the interview Donald Trump’s third wife stayed on message in a manner her husband cannot, hammering away at the media bias “bashing, bashing, bashing” her husband (and her) in a conspiracy with the Clintons. She waved off one of his accusers as beneath her: “She said she saw me on Fifth Avenue. I was never friendly to her; I wouldn’t recognize her,” she said. She took shots at women more generally, pointing that most of the anti-Trump coverage is written by women and that women routinely give her husband their phone numbers, “inappropriate stuff,” in front of her.

Yet when asked what she would focus on as first lady, Trump talked about “her passion for helping children and helping women,” adding she’s concerned about the effects of cyberbullying on children. She herself quit her Instagram and Twitter accounts more than a year ago, she said, because of “negativity.” She didn’t mention that her accounts featured selfies chronicling her life of conspicuous consumption: private planes, shopping, summer houses and such. “I’m not an attention-seeker,” the former model told Cooper from her gilded Trump Tower penthouse. “My life is not a photo op.”

Throughout, Melania Trump was the perfect helpmeet, even managing to squeeze in generic Trump talking points: “He wants to secure the borders, secure America, bring jobs back, bring economy back,” she said. “He’s a worker, he’s a fighter, he’s very passionate about it. He will fight to the end.” In that, Mrs. Trump III proved this evening, he’s clearly not alone.